nubia delved into the wearable market with the debut of the nubia Alpha at MWC 2019. It was the first time the concept of a smartwatch featuring a foldable display was brought to reality. But of course, as is the case for every first-gen device, the Alpha was not perfect. While the idea was great, the execution was poor, with lots of space for improvement.

Now, the second generation of the Alpha is here, and it is called - rather unimaginatively so - the nubia Watch. A key difference between the two products is that while the former device was touted as a ‘wearable smartphone’, the latter is actually meant to be a smartwatch. In line with this, the nubia Watch doesn’t have some of the features that its predecessor did, such as a camera.

Initially launched in China towards the end of July, the global version of the nubia Watch was announced last month with the launch of a Kickstarter campaign. nubia has since achieved well over its targeted goal and is on track to start shipping the device internationally next month. This review will look at the global version, which has one major difference as compared to the Chinese release: no eSIM support. 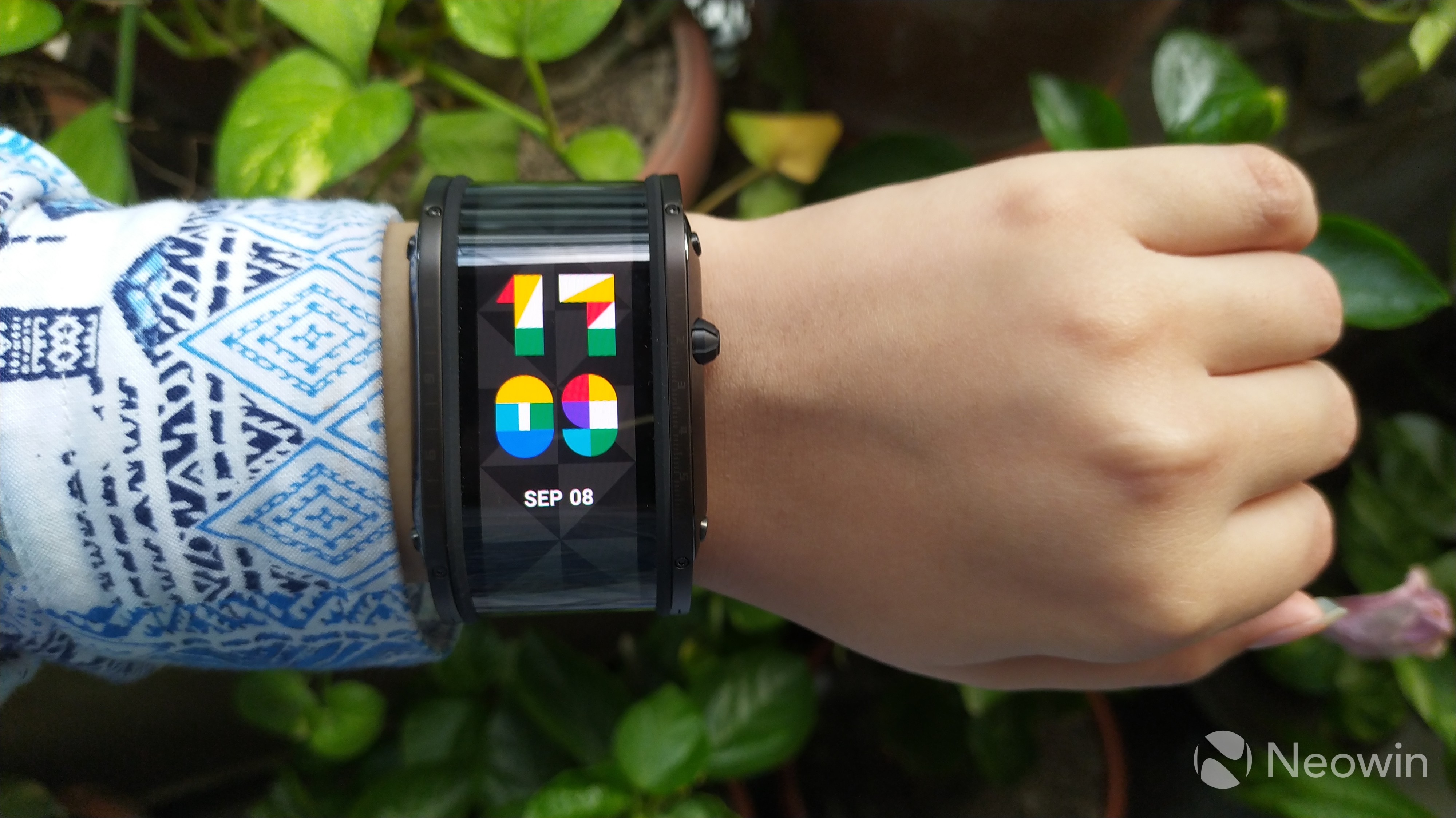 Right off the bat, it is very noticeable that the nubia Watch has slimmed down quite a bit compared to its predecessor, the Alpha. Overall, the chunky heaviness has gone down and it has much thinner bezels now. The Watch also looks much more refined thanks to the aluminium alloy which comes in a choice of two matte shades, Midnight Black and Army Green. It comes with plain black silicon straps out the box but leather ones can be bought separately.

Moving on to the main attraction of the wearable device, the nubia Watch sports a foldable 4.01-inch AMOLED display. The plasticky protective layer is no longer there, giving a more premium feel. While the display is beautiful, it isn't bright enough in the sun and reflects a lot of light. Owing to the large screen size, the smartwatch is prone to accidental touches occasionally. On the right side, there is a power button - the one and only physical button on the device. Meanwhile, the back of the Watch features a microphone, the charging pins and a heart rate sensor. 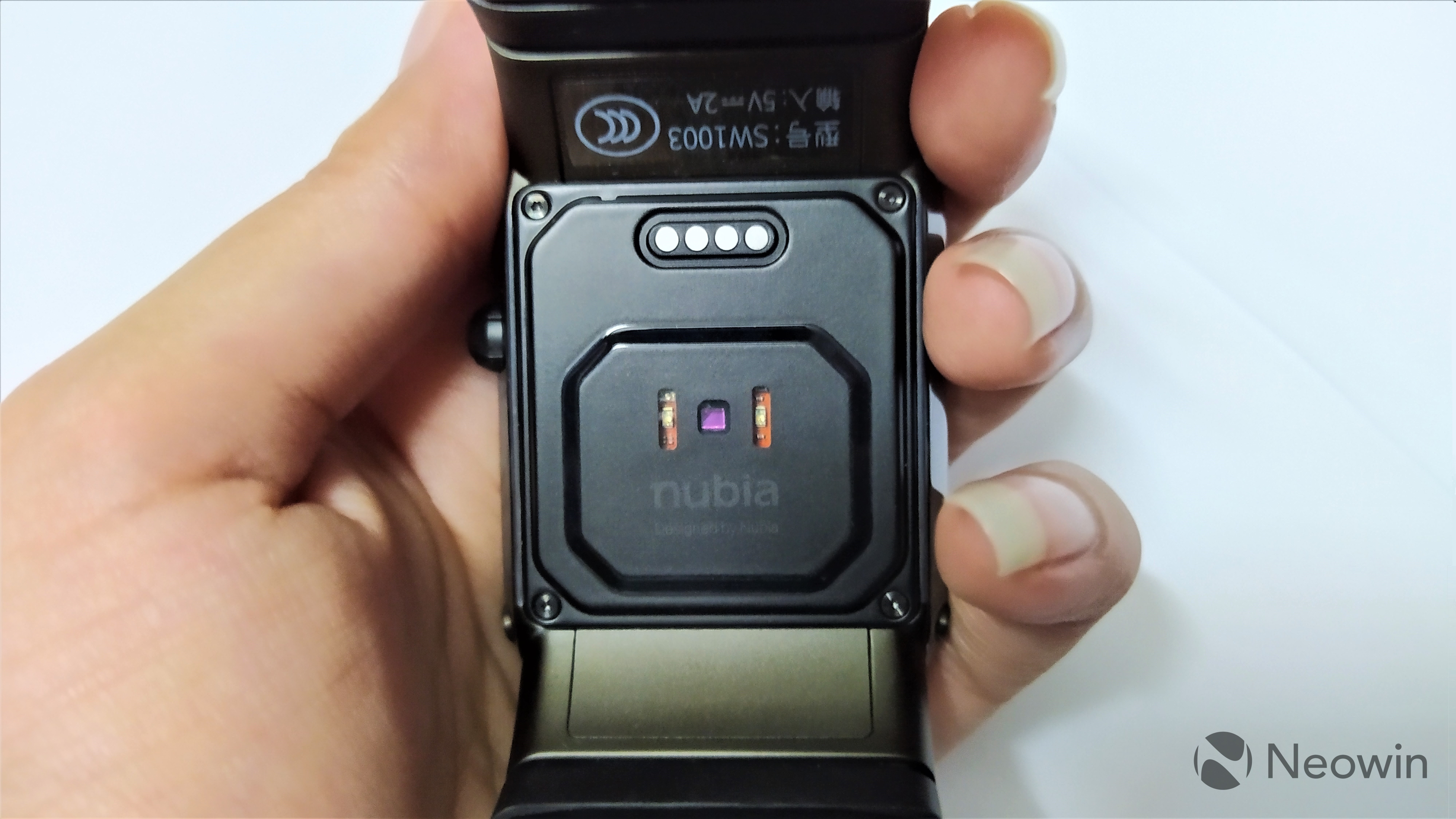 Perhaps the biggest design issue that I encountered was the power button’s functionality. While pressing it can unlock the watch, it cannot lock it. I found this far more annoying than one would expect, as the only other option iss to use a pinch gesture on the screen, which is not always comfortable. What made matters worse was that the display would constantly turn on by itself due to the inaccuracy of the raise to wake gesture. Eventually, I turned off the feature altogether just to avoid having to lock the screen.

Another drawback was the lack of a speaker on the smartwatch. Although the nubia Watch has a music player and can pick up and answer calls, these options are rendered useless without a Bluetooth headset. I could not even hear calls through my phone's speaker or any other compatible Bluetooth device while the Watch was connected to it. This included my wireless earphones and a JBL speaker. 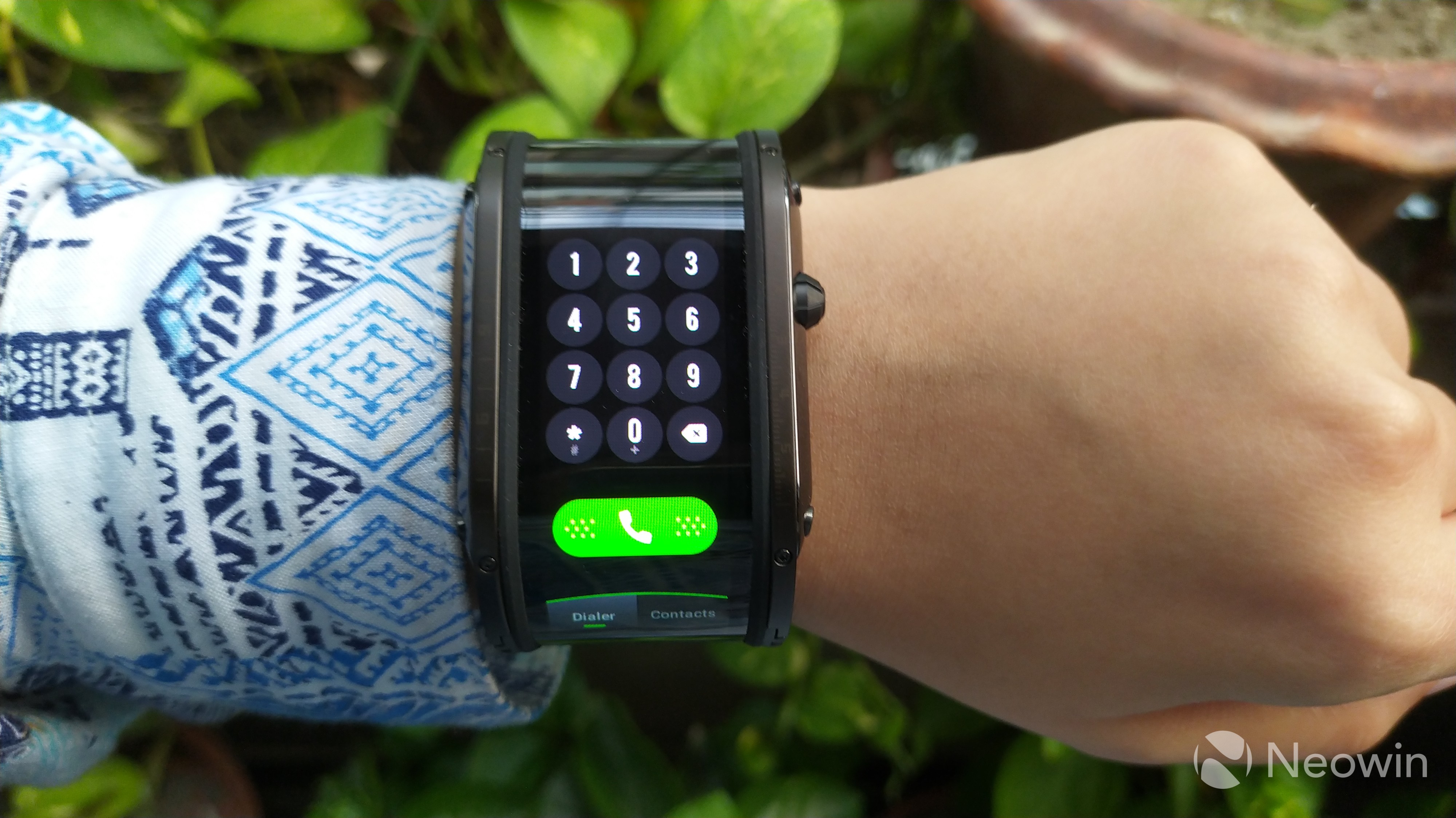 Just like the Alpha, the Watch also uses the custom nubia Wear OS designed for the gorgeous form factor. Overall, the UI is user-friendly and runs smoothly for the most part. Compared to the previous model, the OS has improved and does not have as many glitches. Features of the smartwatch include a calendar, several health and fitness modes, a clock, a music player, a heart rate monitor, a sleep tracking feature, and the ability to make and answer calls. 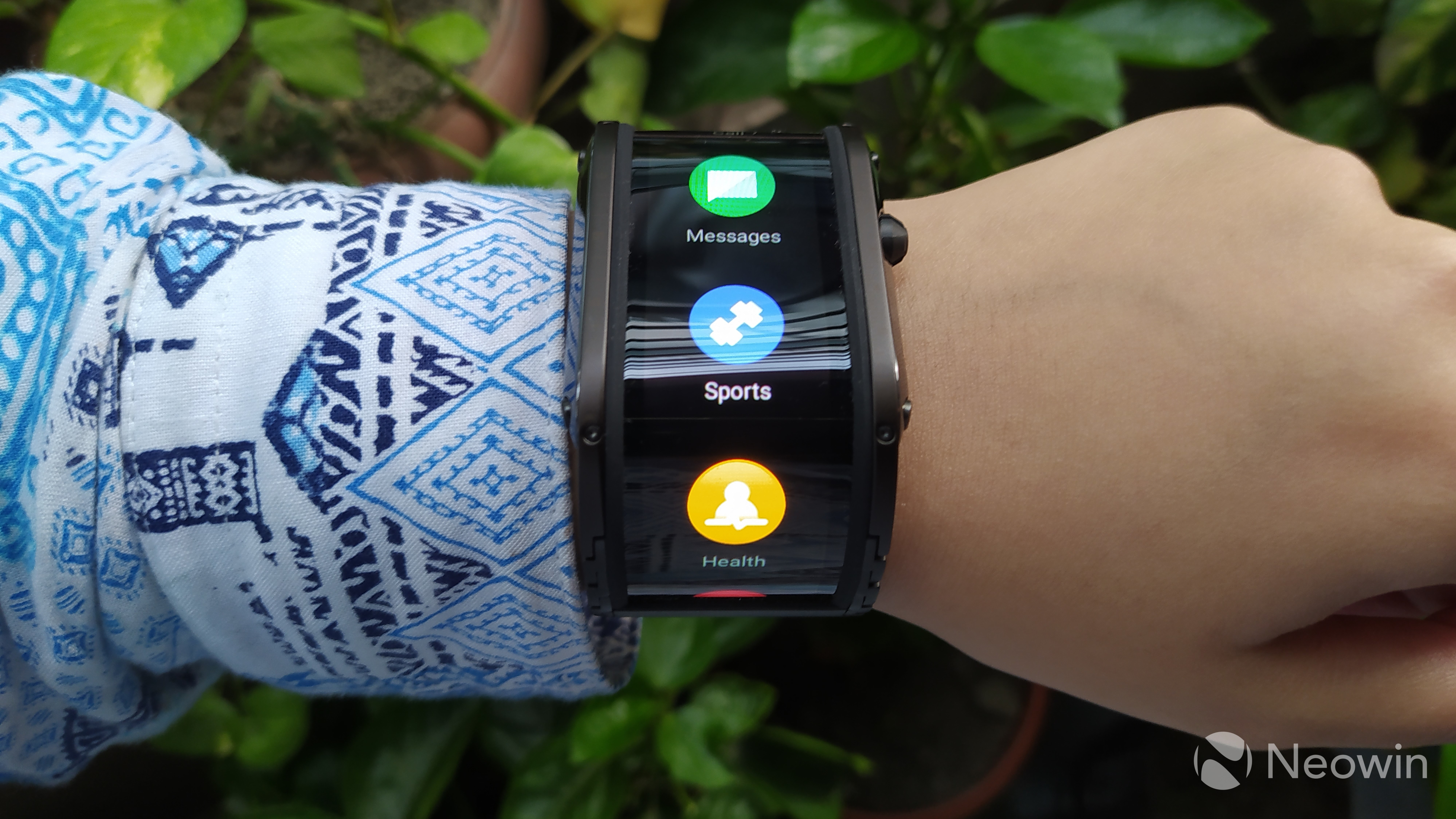 The Kickstarter page for the nubia Watch claims that the device can view and answer emails and messages from social media apps such as Facebook, WhatsApp and Line. Unfortunately, none of these features worked for me. I could not even view, let alone reply to, a single SMS received on my phone. I did not get push notifications for any of these things either. There were some other problems as well, such as the calendar app would not always view my scheduled plans.

When it comes to customizable themes, the smartwatch has plenty of options to offer. The Watch has many skins to choose from, ranging from professional-looking watch faces to more colourful, fun looks. Users can also opt to create custom watch faces using images. These watch faces can be created on the mobile app which is compatible with Android as well as iOS. 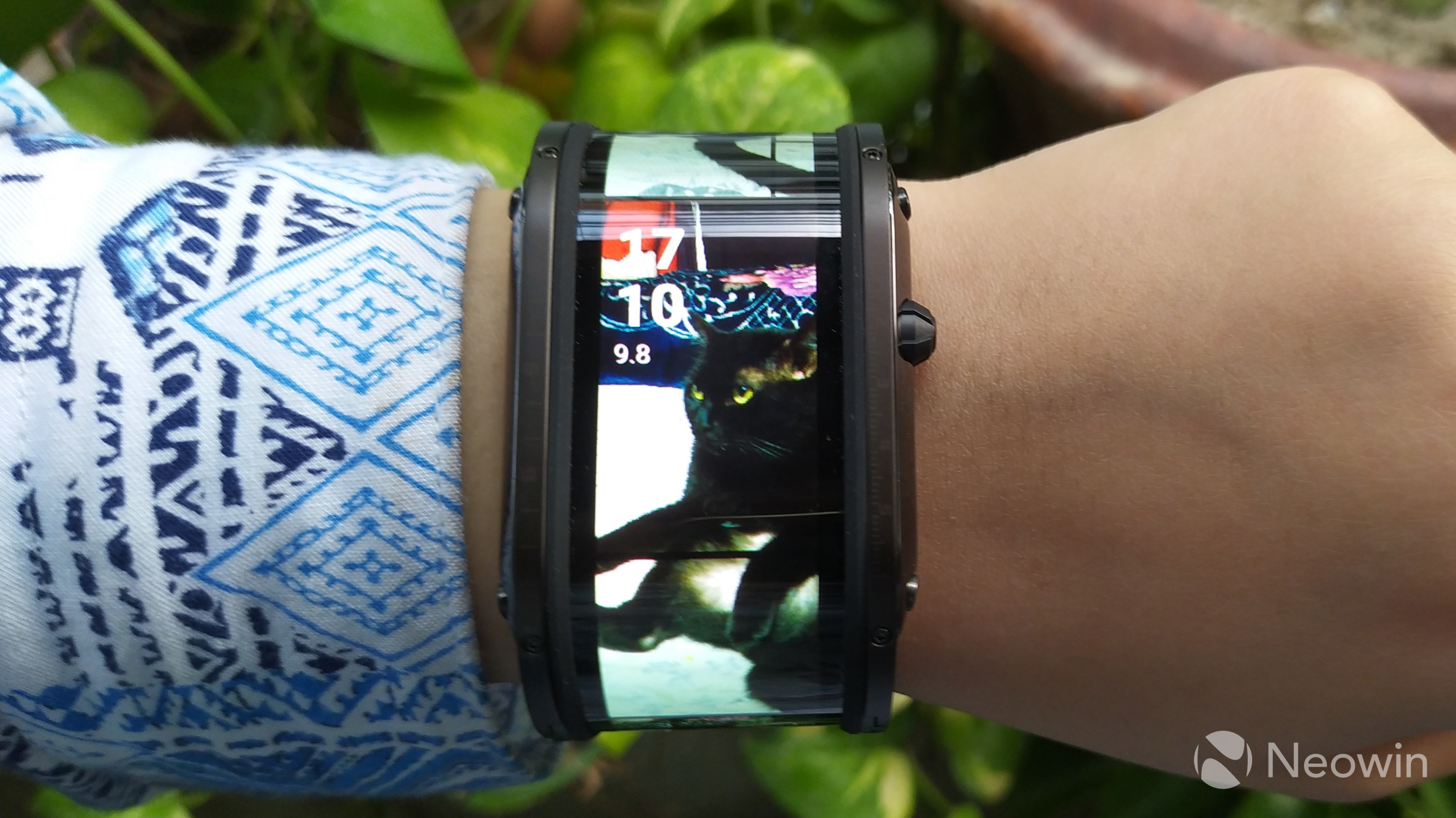 Apart from fitness and health, the other features - or rather, the lack of features - of the smartwatch kept leading me to the same question: Why? Sure, the device looks spectacular, but its actual functionality is pretty limited. After last year's release, I was really hoping that nubia would take advantage of the brilliant new form factor. While the company did make improvements to the product, it cut back on too many features.

The decision to scrap a camera for the second-generation of the flexible device makes sense, as nubia was trying to focus on creating a true-blue smartwatch. But then taking a speaker out of the equation is mind-boggling. The nubia Watch does not even have an image gallery or an alarm that rings out loud. Instead, it is full of gimmicks such as the scrolling marquee feature and pretty dynamic themes. Considering the retail price and potential of the device, I was hoping that I would be able to do a lot more with it. 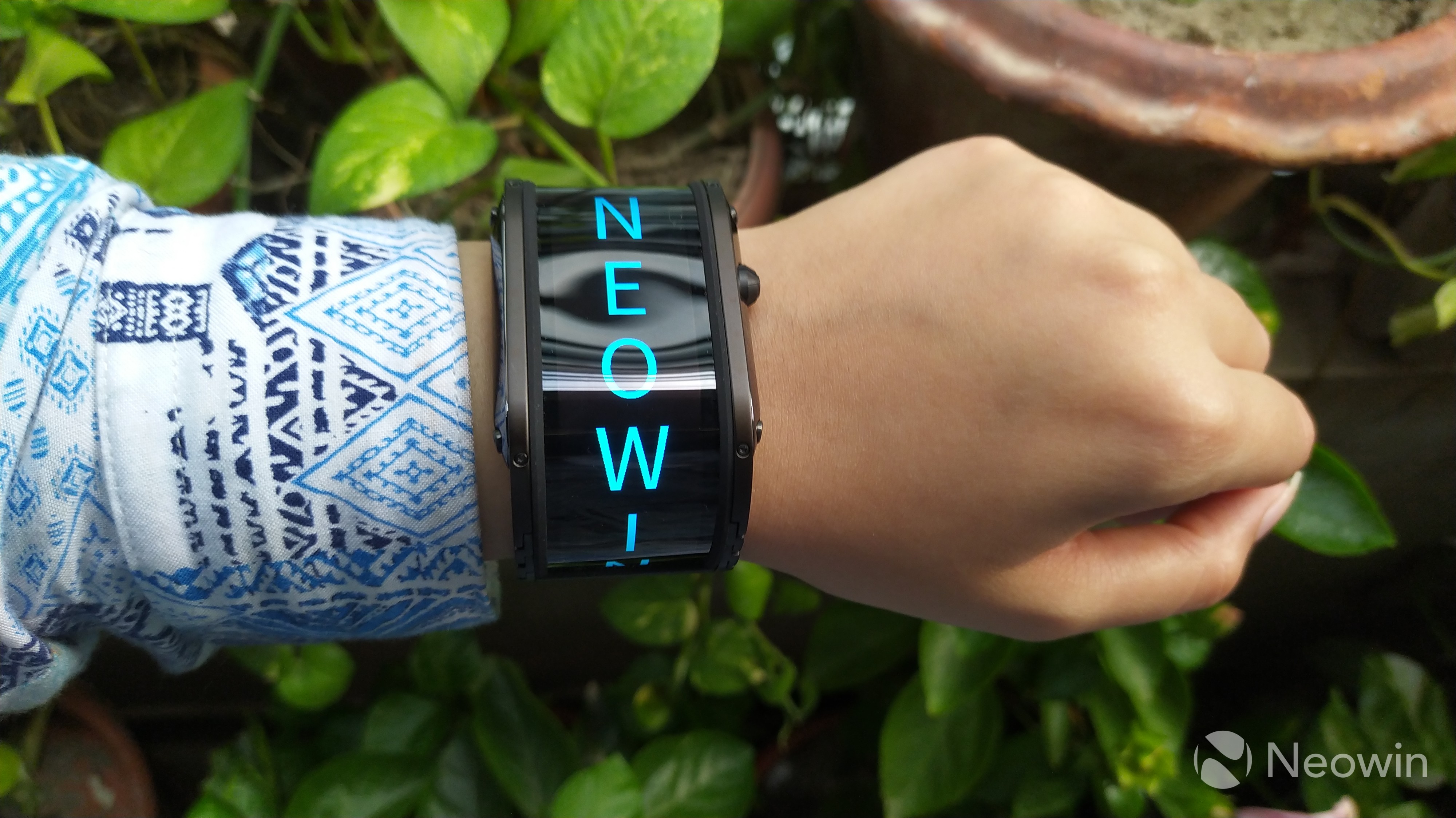 Rather disappointingly, nubia decided to stick with the Qualcomm Snapdragon Wear 2100 for the second-gen Watch as well. Seeing as how several generations of the Snapdragon Wear SoC line are already out, this move is puzzling. Not only is the Wear 2100 more than 4 years old, but it has also already been succeeded by the Snapdragon Wear 2500, 3100, 4100 and 4100+ chipsets for smartwatches in that order. Factoring in a smaller 425mAh battery and the same RAM and internal storage specifications as last year's model, it just doesn't make sense.

nubia claims that the Watch's battery will last users up to seven days in power saving mode and 36 hours when used normally 'between charges'. I put this to the test by fully charging the wearable device and using it as I would normally, raising my hand frequently to check the time. Additionally, I also left the Bluetooth, WiFi and GPS on. This lasted me a little over 36 hours, which was a pleasant surprise. 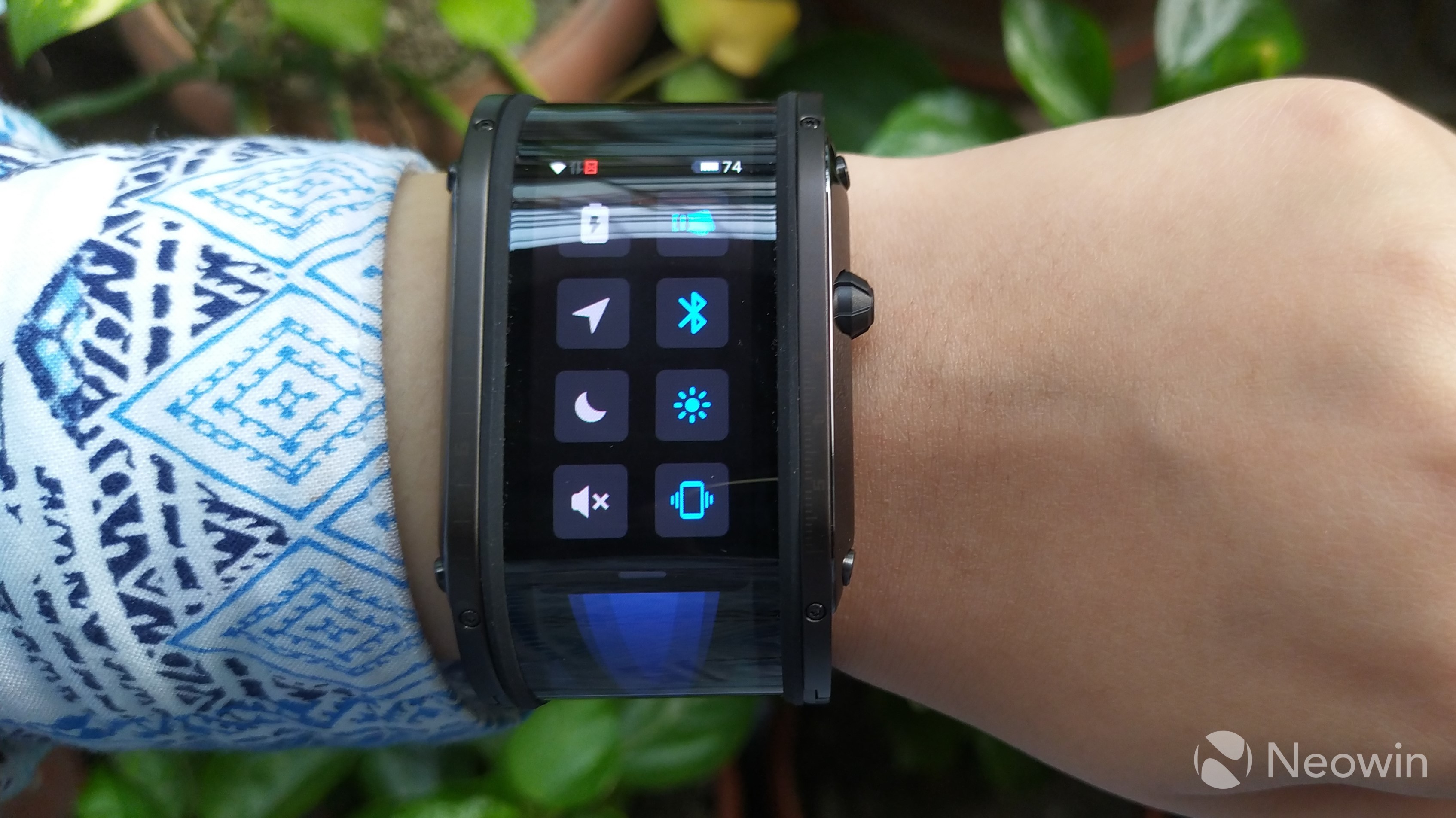 Once my test was complete, I realized that one of the hardest parts about using the Watch was charging it once drained. Despite the official 85-minute charge time detailed by nubia, it took me a little over two hours to fully charge up the smartwatch. Considering the smaller 425mAh battery, I was pretty disappointed.

As I mentioned earlier, there were performance issues as well. I did not receive push notifications for anything other than phone calls. Answering calls was a major issue as no compatible device could play the call audio, even though the music player worked perfectly fine. The raise to wake gesture was pretty terrible, triggering the Watch's display to turn on at random moments throughout the day. And lastly, the calendar app seemed to have a mind of its own, displaying my phone's scheduled events one second and appearing completely blank the next. 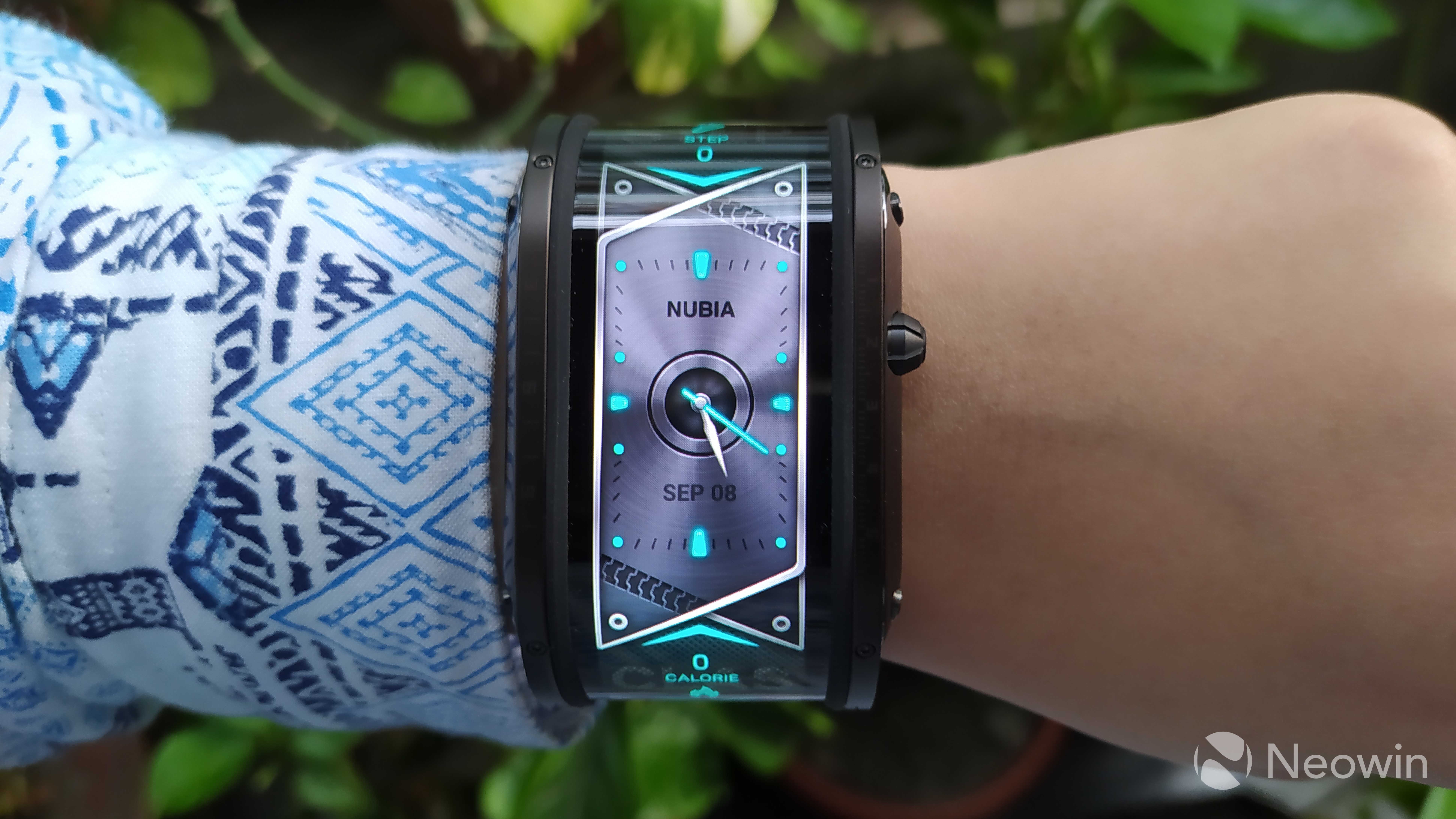 For the Alpha, nubia released a companion application called Nubia Wear to help users set up and manage their devices. This app was full of bugs and made it incredibly difficult for users to execute the simplest of tasks such as syncing contacts. For the new nubia Watch, the Chinese electronics company developed a second app without fixing the previous one. In fact, the old Nubia Wear companion application has not been updated since April 2019. This stands as a testament to the quality of support provided by nubia in the long run.

Overall, the nubia Watch is a device best described as an innovative and fun piece of technology held back by software limitations. Aside from trimming down the bulky edges and improving the design, I was hoping that nubia would also take advantage of the unique form factor. The large flexible AMOLED display offers an intriguing premise that the OS fails to take advantage of.

Other than the foldable screen, the Watch has very few features that make it any different from other wearables in the market. On the contrary, there are countless other smartwatches out there with smaller screens that clean up much nicer, offer more functionality and cost a whole lot cheaper, like the OPPO Watch. 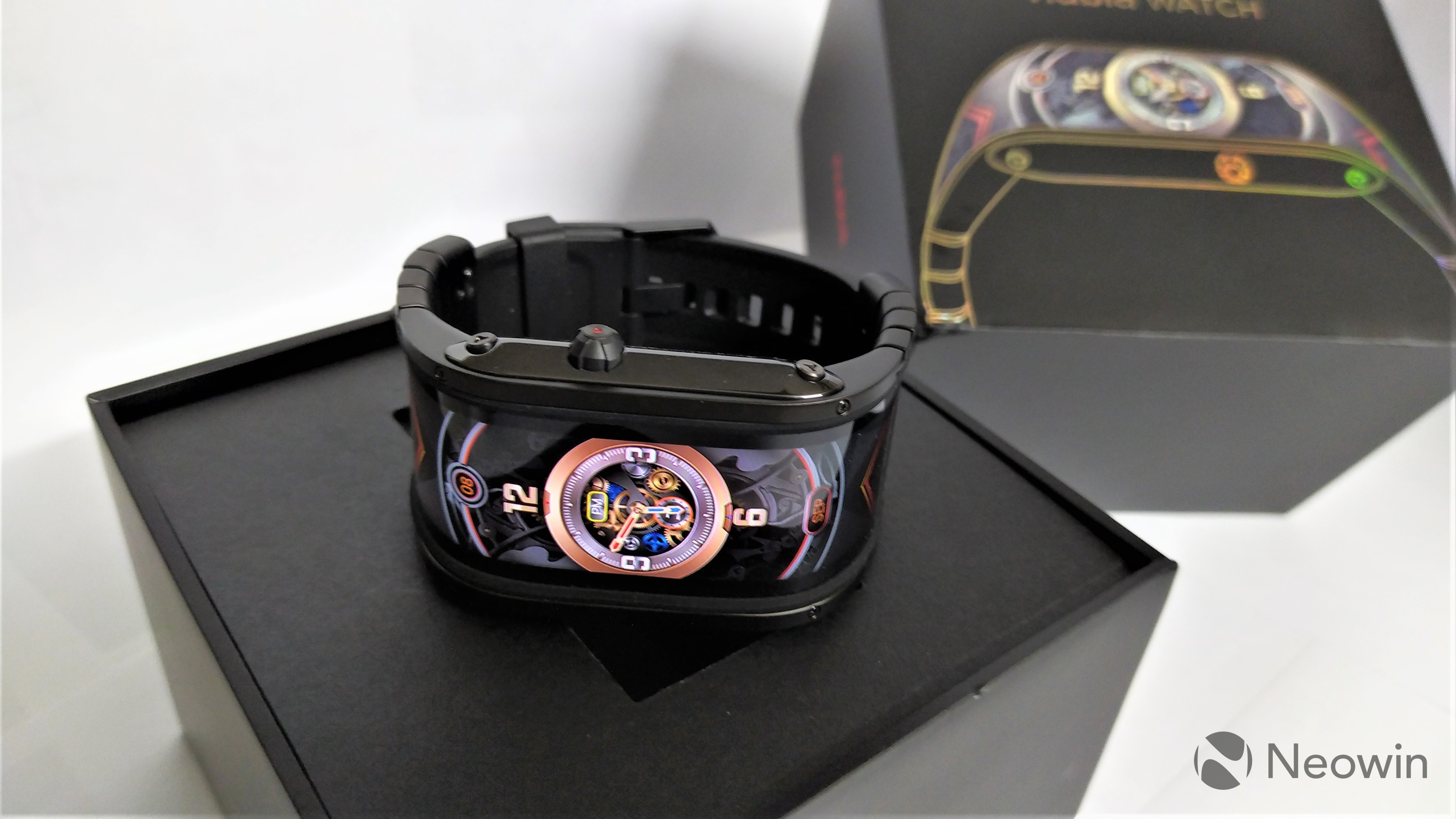 So the question that I, as the user, kept coming back to was "why?". Why would someone go out of their way to purchase a $399 smartwatch that cannot even view or answer messages? Sure it has a heart rate sensor and a decent number of fitness modes, but it lacks some very basic features like a speaker and proper push notifications. At least the presence of a camera would have helped build a case for the device, but unfortunately, the maker decided against it.

I had a lot of hopes for the nubia Watch, and it could have been all those things I imagined. As a fashion accessory, it serves as the perfect flex. Personally, I love how it looks and the screen is beautiful. But the software and functionality need a lot of improvement. Another problem is the price, at $399 this thing is far too expensive. Improve the usability, add more features and decrease the price and then the smartwatch could actually stand its ground.