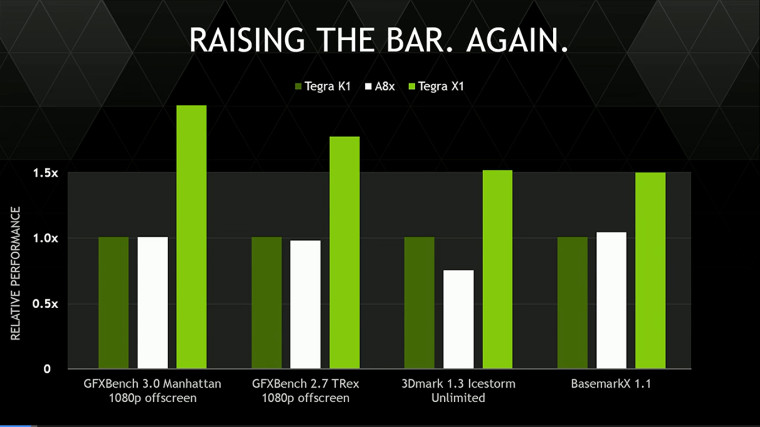 Make no mistake, the recently announced Nvidia Tegra X1 is a real beast. The mobile graphics chip packs 1 teraflop of compute performance in a very tiny package that is highly energy efficient. It is already in production, so we should see its graphical muscle in products in the near future, maybe even in a successor to the current SHIELD tablet.

The Tegra X1 superchip is based on Nvidia's Maxwell architecture, which is also used in the company's recent desktop GTX graphics cards, enabling double the performance while maintaining the same power usage as the previous generation. Not only that, but just as the previous Tegra K1 platform, it will make life easier for developers looking to port their game for mobile devices.

The X1 features a 256-core Maxwell GPU along with an 8-core 64-bit ARM CPU and can handle 60fps 4K video playback in either H.265 or VP9 format. It can handle DirectX 11.2, and will also support DirectX 12 which will probably be released with Windows 10. It even runs the Unreal Engine 4 Elemental Demo in real-time.

Nvidia has benchmarked the device against Apple's A8X, considering both are using a 20nm process. The results show the Tegra X1 performing two times better than A8X in GFXBench at 1080p, and roughly 1.5 times in both 3DMark Icestorm Unlimited and BasemarkX.

The most impressive thing however is the power efficiency, which shows the Nvidia chip outperform the previous Tegra K1 and Apple's chip by 70% for the same power consumption, while also managing to be more stable in this regard.

The work that Nvidia is doing with its mobile chip has great potential for mobile games, 4k Netflix streaming, virtual reality, etc. but as good as that sounds, we still have to wait and see if developers will take advantage of Tegra X1's raw power.