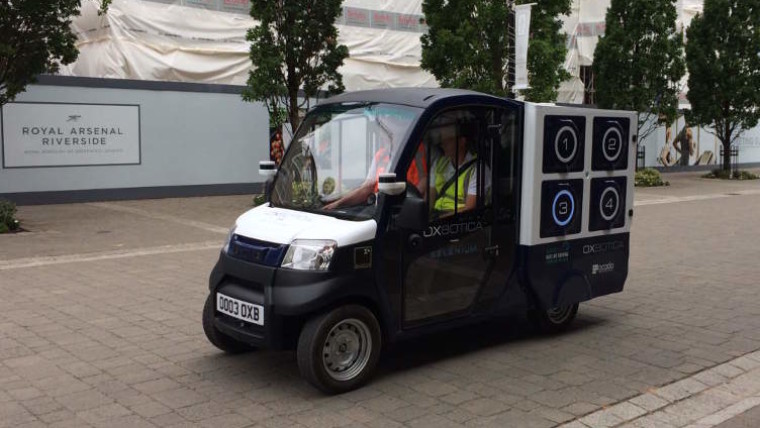 Online supermarket and delivery company Ocado has paired up with automated vehicle development company Oxbotica and have created a driverless delivery van called CargoPod. The golf cart-sized, all-electric van made some test deliveries to customers this week in London.

While making these deliveries, there was still a person behind the wheel, ready to take control in case of a problem, but also because the law still demands that a human driver is sitting behind the wheel. If the driver did want to take control, all they would have to do is place their hands onto the steering wheel and the automated system would hand it over to them.

The van can travel up to a speed of 25 miles per hour and travel 18 miles in distance without needing a recharge, although in tests in the Greenwich area of London, the van only went up to 5 miles per hour. It has eight shopping basket-sized pods on its sides, where the customer’s goods are held for delivery; the respective pod for the customer lights up upon arrival and the customer then touches the pod to receive their delivery order.

Ocado has said that this van is intended for “last mile” small deliveries, particularly in places where larger vehicles simply cannot get to, such as semi-pedestrianized streets. The vehicle navigates using a system called Selenium, created by Oxbotica, which consists of stereo cameras, lidar and conventional car sensors located around the vehicle. It is very likely that Oxbotica will use these same technologies on the automated vehicles that it plans on testing on long-haul routes between London and Oxford.

The CargoPod delivery test forms a part of the much larger GATEway (Greenwich Automated Transport Environment) project led by the Transport Research Laboratory (TRL), which has received 8 million pounds of state funds dedicated to the development of automated delivery and transport systems in the UK.

While Amazon keeps on exploring its idea of drone delivery to customers, Ocado has said it is very comfortable with the CargoPod’s more traditional on the ground approach. An executive from Oxbotica has said that automated systems like CargoPod could be popping up all over UK roads within 3 years. If legislators make the necessary approvals and with many political parties already eager to make the UK a leader in automated transport, this seems very likely.