One perennial issue with organizing a conference call the traditional way is that either it can be hard to hear the person on the other end or the mic is not clearly picking up your voice; as well as the messy cable setup that comes with it. While Jabra has long been offering wireless conferencing solutions with noise cancellation features, Shenzhen eMeet Tech Co. from China aims to help address that problem with the help of artificial intelligence.

The company is fairly new to the voice segment: it launched the OfficeCore M1 conference speakerphone in November last year, its first product geared toward the enterprise market. Early in June, eMeet made a bold attempt at making inroads into the smart speaker segment by releasing an improved second-generation OfficeCore conference speaker to the market, the M2, with the main selling point being its AI-powered algorithm for suppressing noise and echo, which marks a major upgrade from the OfficeCore M1. The first-gen speakerphone relies only on the VocalFusion technology developed by XMOS, a provider of embedded voice and audio interface solutions. In a nutshell, VocalFusion uses far-field voice recognition to identify the human voice.

eMeet claims the OfficeCore M2 is the first AI-powered conference speakerphone in the market, retailing for $209.99 on Amazon, which is higher than the price of a Google Home or Amazon Echo device. At such a hefty price, is the OfficeCore M2 worth buying? Let's find out. 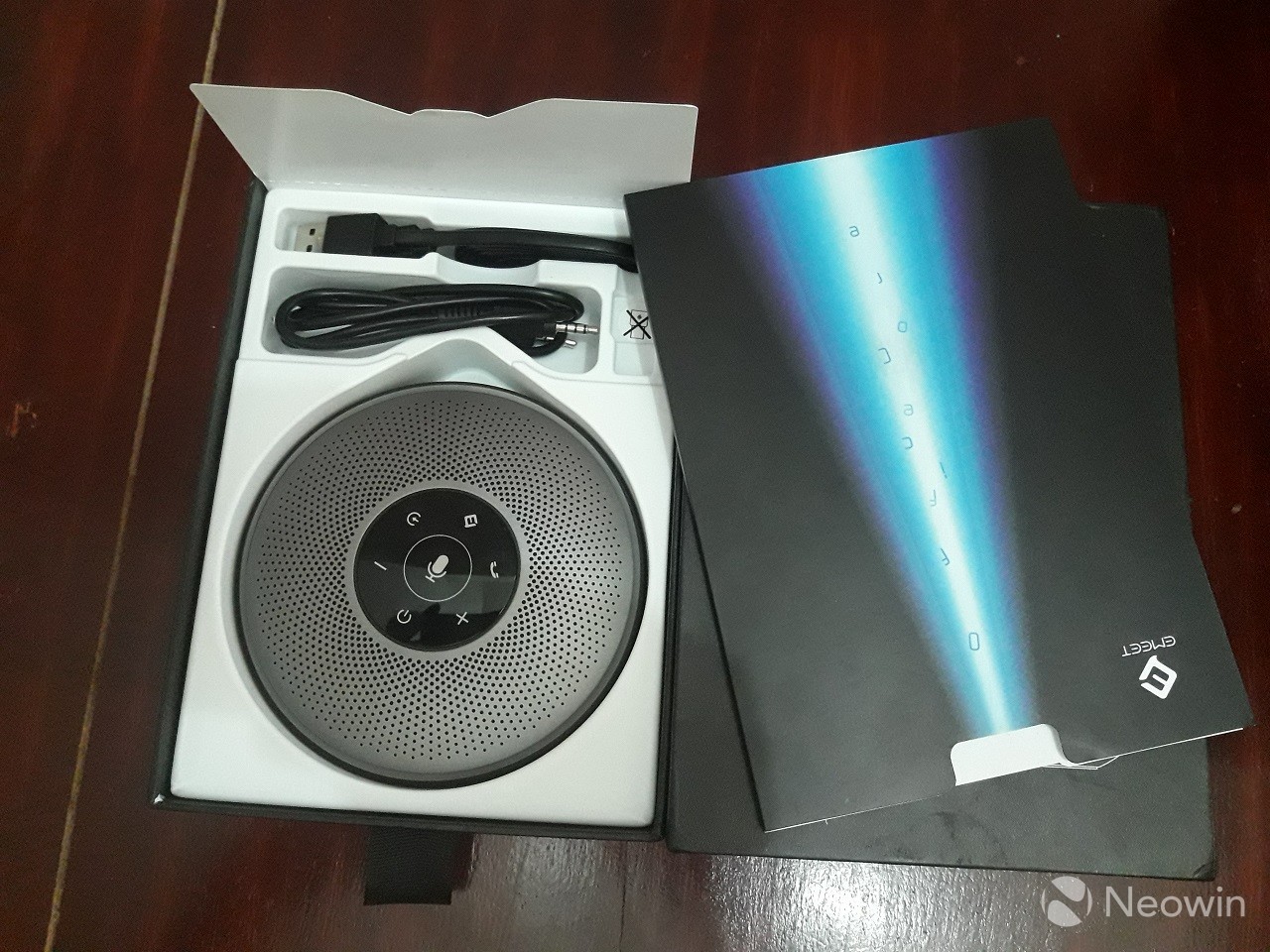 The smart conference speakerphone was delivered in a small black box along with a micro USB cable, auxiliary cord, and the user manual available in English, Dutch, Mandarin, and Japanese. Additionally, I've noticed an empty space in the package that seems to be reserved for a Bluetooth USB adapter, though there is no sight of it inside the box. The user manual states that only the OfficeCore M2+ and M2+ce ship with the wireless USB adapter. For the other models, any USB adapter can be purchased separately.

When first turned on, the LED light around the device's edge illuminates in blue, which is what I love about the design; instead of making a loud voice prompt on startup, it gives a gentle sound. With a compact design and a diameter of about 5 inches, the OfficeCore M2 fits snugly in almost every container like my sling bag, the small compartment of my backpack, and even in the pocket of my jeans. Built using "aerospace-grade" aluminum materials, it's a portable speakerphone with a puck-shaped form, though its top surface is slanting a bit to give it a UFO-esque look like the one you see in sci-fi movies. And it's oddly pleasant to look at. 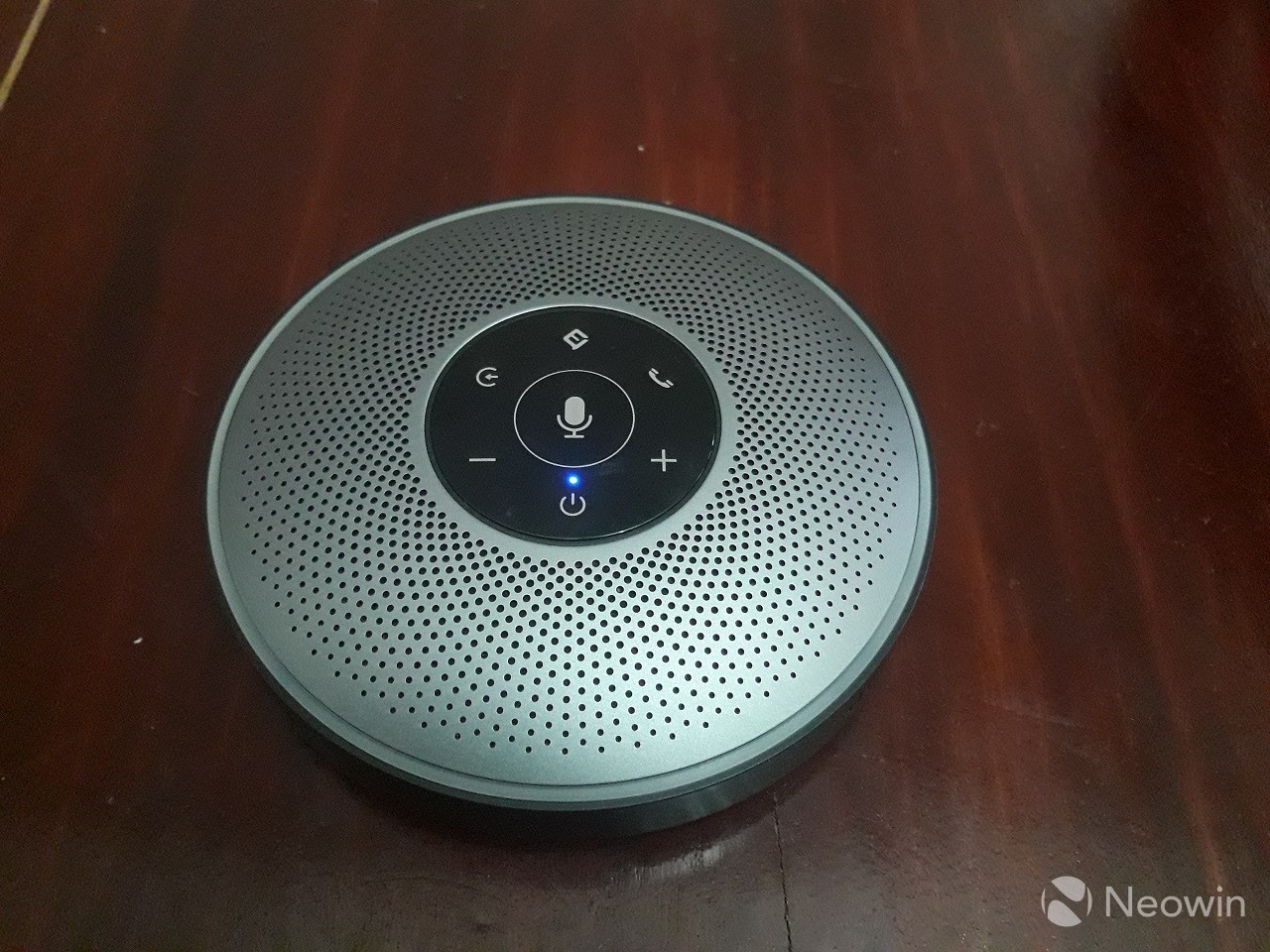 The speakerphone comes in three color variants: black, gray, and silver. eMeet sent me the gray model with a black base for this review, which does have an elegant look to it, so to speak. The operational keys are situated in the central portion of the device. Unlike the first-generation OfficeCore which comes with a set of physical buttons, though, the OfficeCore M2 ships with touch keys for managing its range of functions. For one, that makes the latest iteration of the OfficeCore easier to operate.

The touch keys are arranged in a circle, with the mute key placed at the center. The LED light encircling the edge of the device turns red when the mute button is tapped. It also serves to indicate the current power level of the device: green indicates the device has enough juice and red signifies low power level. You can check the battery status by briefly pressing the power button, which sits below the mute key. The power button took three seconds to respond to my touch, which was quite a turnoff, but not at all a major issue. Nevertheless, latency is not an issue with the rest of the touch keys. 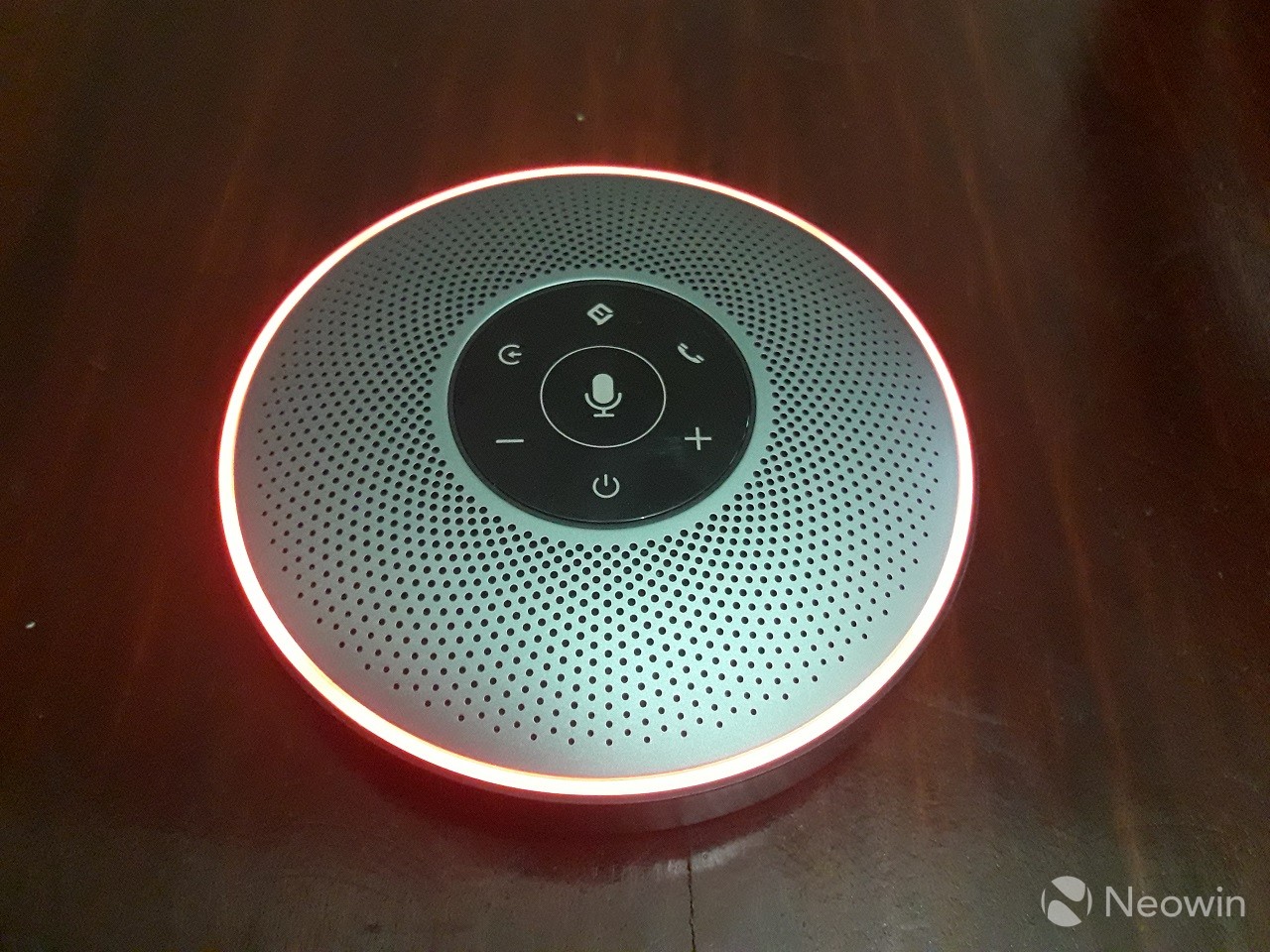 To the upper left is the input switch button for selecting the audio source. The indicator light found atop the power button turns blue when the Bluetooth connection is selected, white for auxiliary, and green for USB connection. It's a helpful trick especially when you connect multiple audio sources to the speakerphone when setting up a conference. With the centralized input switch key, it's easier and quicker to switch between multiple audio inputs in the middle of a call without having to tap separate buttons. 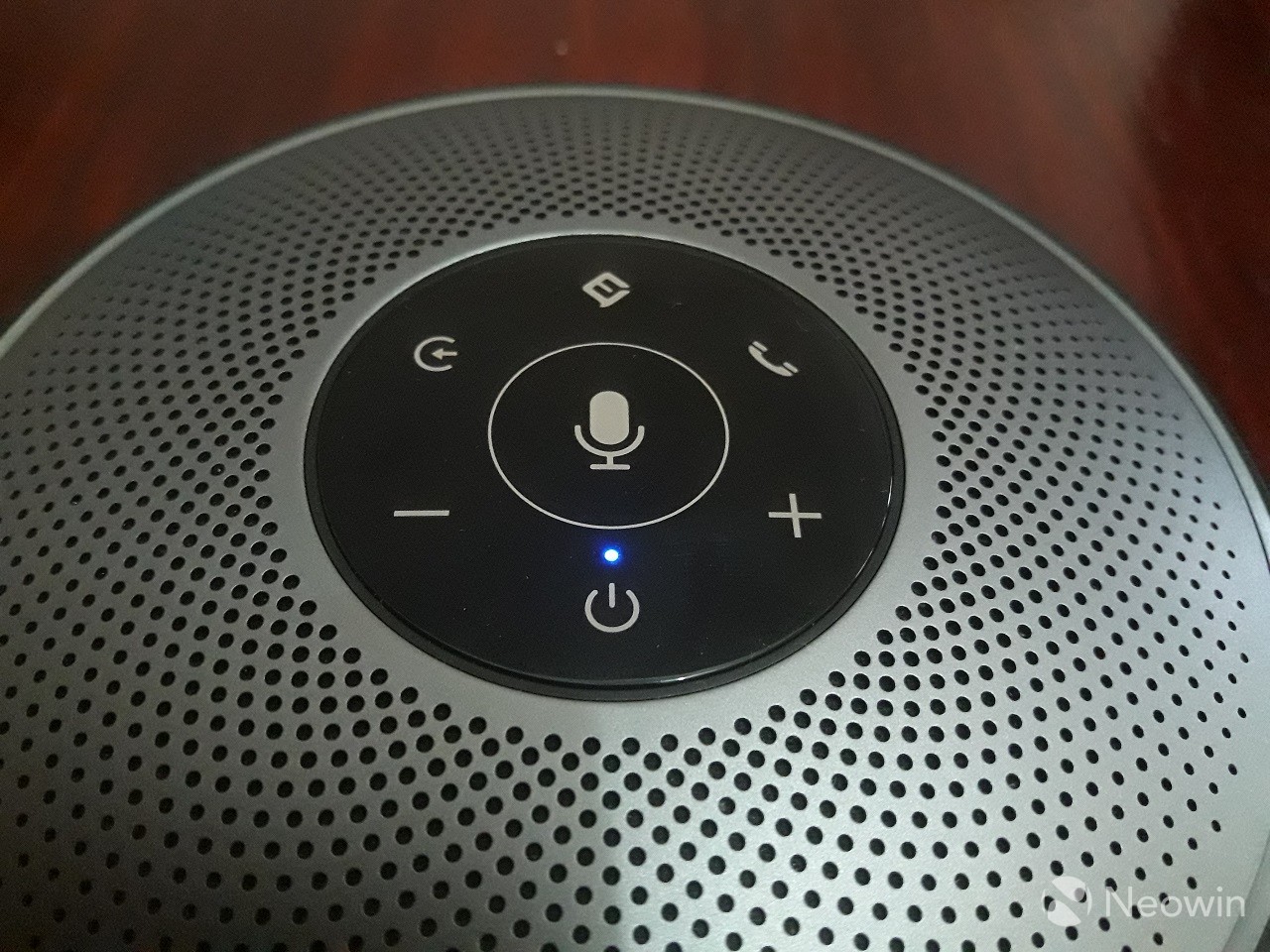 To the north of the mute key is the intelligent assistant key for calling on a personal assistant already installed on your phone. Keep in mind that the speakerphone doesn't have a native digital assistant of its own, though it does include support for Google Assistant, Siri, Cortana, and Tencent Dingdang. I will discuss further the smart functionality in a bit.

The answer/end call key is located at the upper right side while the volume up and down keys are found at the lower right and lower left sides, respectively. When I turned the volume up or down, the LED light surrounding the speakerphone also displayed the volume level step by step accordingly. I find the interactive feature impressive since it gives me a clear idea of how loud the volume is at any given moment. The speaker grille is found at the top surface of the device so that the sound does not come from the bottom, otherwise, it would muffle the audio when the speakerphone sits on a table or any plain surface. 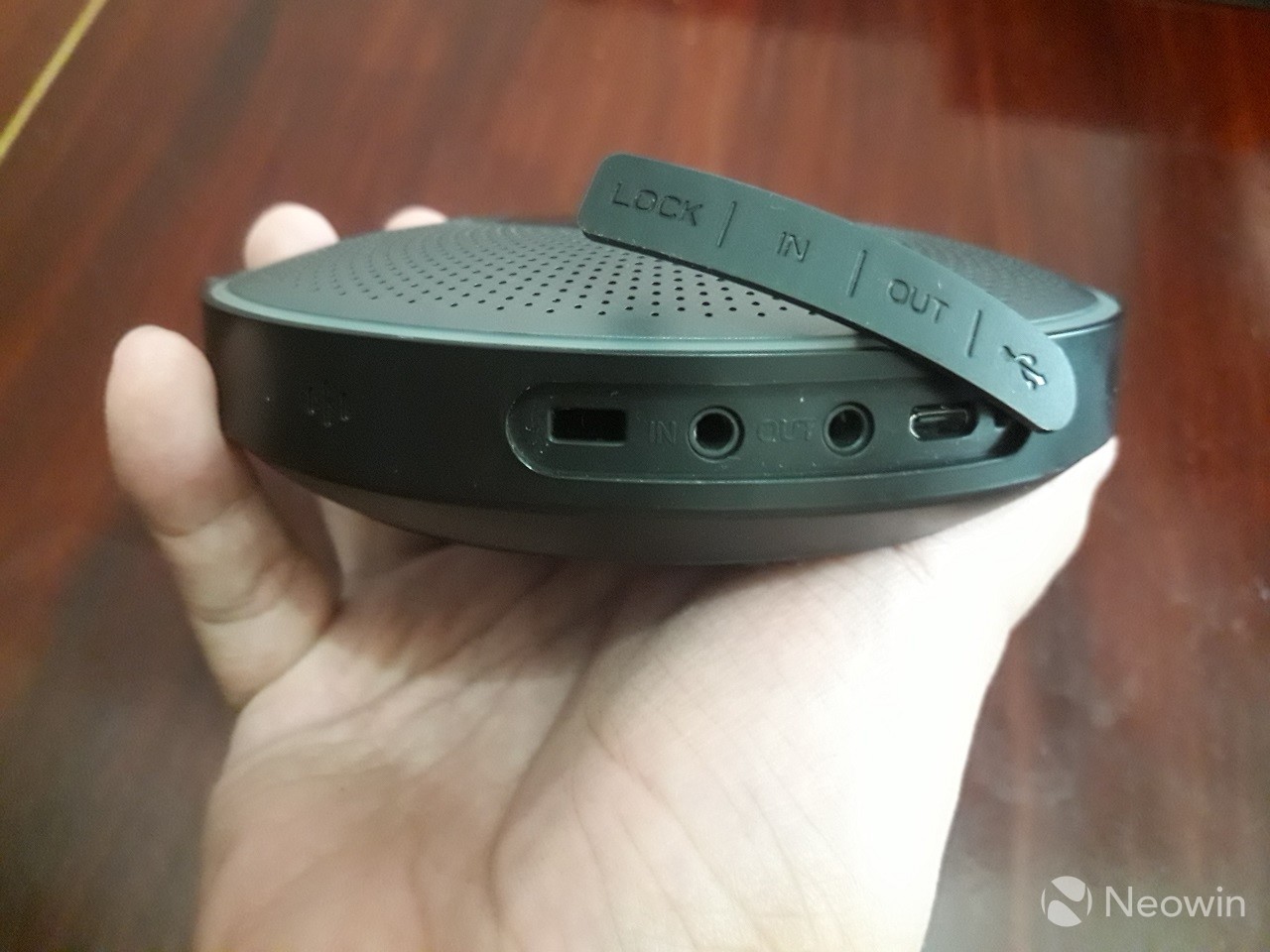 A number of interfaces can also be found on the side of the speakerphone such as the micro USB port, two 3.5mm audio jacks for auxiliary input and output, and an array of four microphones. The microphones are placed in equal distances on the side of the speakerphone so that the array captures the human voice coming from all directions. Also, the micro USB port serves as the power input for recharging the device, which can be juiced up either with a smartphone via OTG or an external battery pack in addition to a traditional power outlet.

The company's claim that the device can last up to 12 hours of talk time seems to hold true, that is, if the speakerphone is used purely for calling. During my test, the device lasted only up to more than 10 hours after using it for calling and music playback half the time. When used solely for playing my favorite soundtrack, the OfficeCore M2 managed to reach more than 9 hours of operation, a little less than eMeet's claim of 10 hours.

The OfficeCore M2 has a decent audio and mic quality overall. When I tested the speakerphone, the white LED color was what I saw often during a call. It pulsated where a specific microphone captured a spoken word so that the device allowed me to know that it listened when I spoke, and it did so in such a way that the LED light indicated the direction from where the sound originated; that is, in this case, my direction. 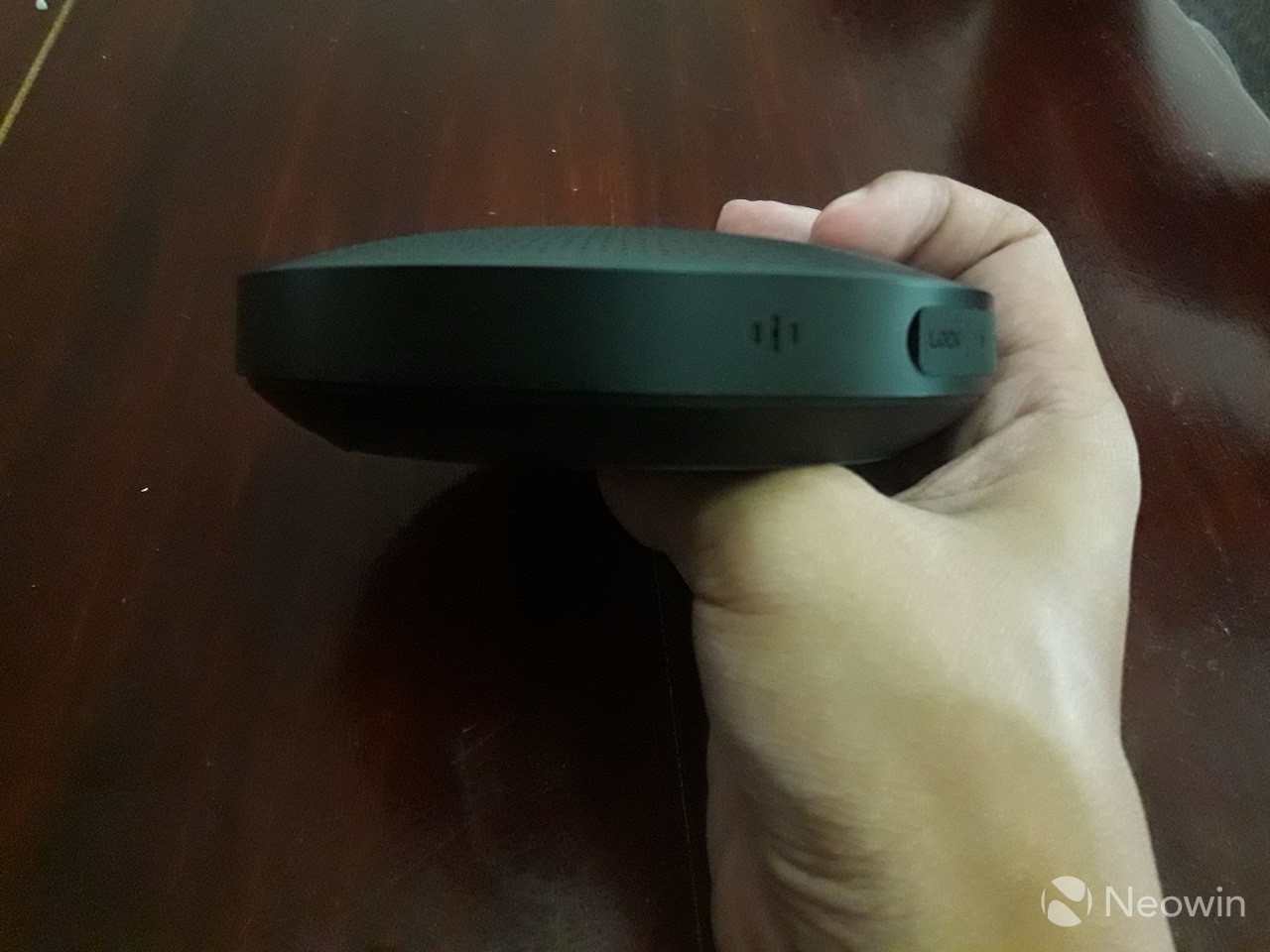 The speakerphone can provide enough volume for a medium-sized conference room and pick up the voice of up to 12 persons, thanks to its omnidirectional microphone array built based on microelectromechanical systems (MEMS), which allow for the development of small microphones with good sensitivity.

In my week-long use of the OfficeCore M2, I can attest to the speakerphone's ability to provide a clear audio even in a noisy surrounding. For this review, I tested the speakerphone with four people, including myself. There was no issue at all with how the device's microphone array captured the voices of my friends who used the OfficeCore M2, with me on the other end of the call listening to them on a phone.

Besides supporting audio and video calls, the speakerphone also supports music playback. However, while it can play your favorite tracks via Bluetooth or a wired connection, it isn't really made for it. If you're looking for a speaker with a roaring sound, the OfficeCore M2 isn't for you.

When necessary, the distance coverage of voice pick-up and playback capabilities can also be expanded by linking multiple OfficeCore M2 units together using cable wires. The speakerphone is also compatible with multiple video calling applications such as Skype for Business, Microsoft Lync, Cisco, Avaya, FaceTime, WeChat, Ding Talk, and more.

Advertised as a smart conference speaker, the OfficeCore M2 made me wonder if it worked like Google's Home or Amazon's Echo devices. Well, it does in a way since it can be used to summon third-party personal assistants, but not natively. I was able to speak to Google Assistant via the speakerphone, with my mobile device tucked away somewhere within the Bluetooth range. In other words, the OfficeCore M2 can function as an extension to a smartphone's built-in speakers.

However, the device is essentially not trying to compete with the typical smart speakers out in the market. The real intelligent function of the OfficeCore M2 lies in its ability to determine the source of sound while eliminating all forms of interference with the help of its VoiceIA algorithm.

It is, perhaps, worth pointing out the speakerphone's AI technology is capable only of reducing unnecessary background noise such as the buzz of an electric fan or the cacophony of traffic outside. In my experience, the speakerphone recognized not only my voice but also the bark of my dog within several meters away in a separate one-on-one call with another person.

The OfficeCore M2, however, costs more than twice the price of Google Home or Amazon Echo devices while lacking a native digital assistant at that, which makes it less attractive to consumers. It would have been nice if eMeet was able to squeeze a built-in voice assistant into the speakerphone to justify its price for that market.

Nonetheless, what the OfficeCore M2 lacks in native smart functions, it compensates in audio and mic quality. This is a product for people who really need a powerful noise cancellation solution for a conference call involving several persons. For that matter, the speakerphone doesn't disappoint. The crystal clear voice that comes despite the interference of a background noise or distance is what you might get for the price. 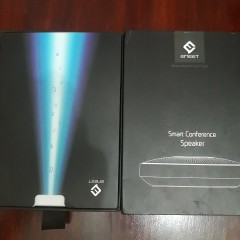 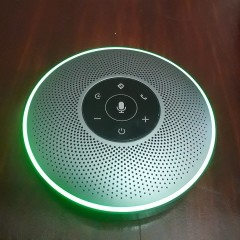 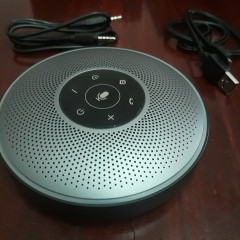 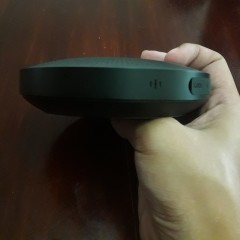 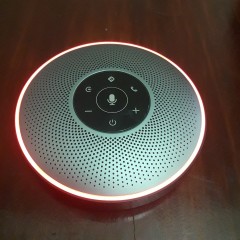 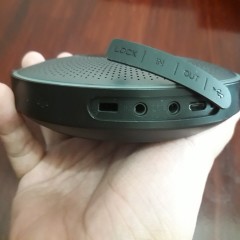 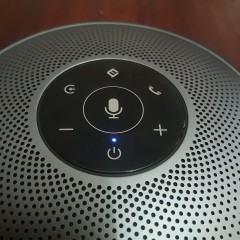 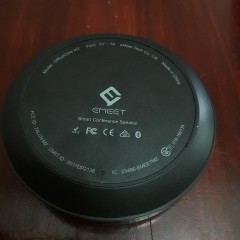 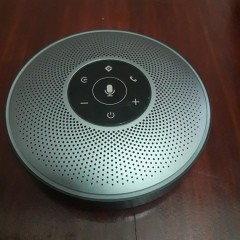 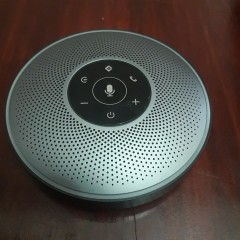 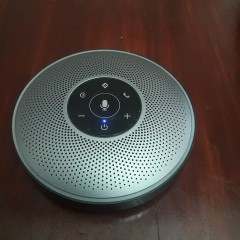 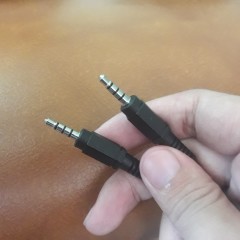 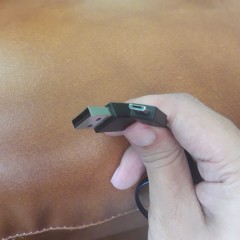