In March 2012, the Raspberry Pi Foundation started taking orders for its $35 Linux-based PC. The bare bones hardware was an immediate hit and it seems that it's price point and its appeal to the hardcore hacker crowd still continues.

In a blog post this week, the team announced that one of its two PC makers, 4/Premier Farnell, have officially announced they have sold over 500,000 units of the Raspberry Pi. That means the PC has generated over $17.5 million in gross revenues. The post added, " ...we don’t have completely up-to-date figures from RS Components yet, but Farnell’s news suggests that we’re well on the way to having sold our millionth Raspberry Pi." 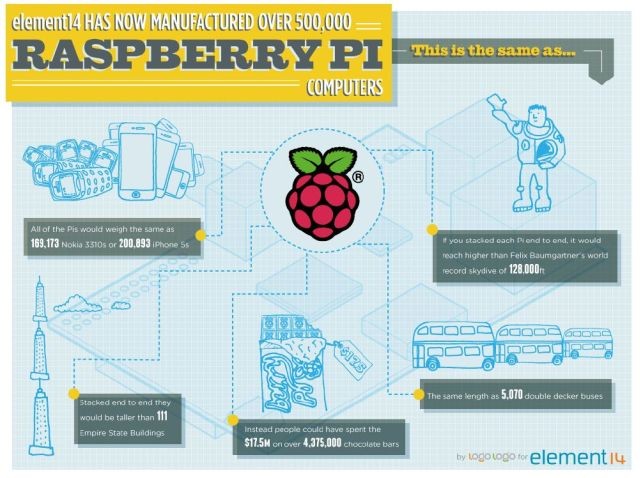 The post came with an infographic, shown above, that has some fun, if somewhat useless, Raspberry Pi facts, such as the fact that people could have bought over 4,375,000 chocolate bars with the money they spent on the PCs.

We are still awaiting the launch of the even cheaper $25 version. The first samples have already been made and the plan is to start taking orders for the $25 Raspberry Pi PC sometime in the early part of 2013.