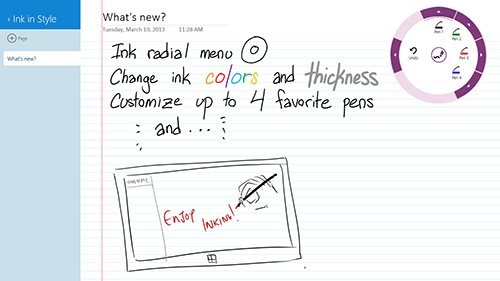 While Microsoft released Office 2013 earlier this year, the only true Office software applications that have been made specifically for Windows 8's new new Modern interface are Lync and OneNote. Today, Microsoft launched a new update for the latter app, adding some more input-related features.

The official OneNote blog has the details of what's been added to the Windows 8 port, which can be downloaded from the Windows Store. One of the new features allows OneNote users to have some improved pen customization options while working with a stylus on a touchscreen. Microsoft says:

As you bring your stylus closer to the screen, the radial menu indicator will pop up. Tap it to open the radial menu to see the available pens. You can customize them by navigating to the second level of radial menu and then selecting the color and thickness that suits your needs.

The new addition will also save the customized pen choice in a slot on the menu so users can quickly go back to it when they need to.