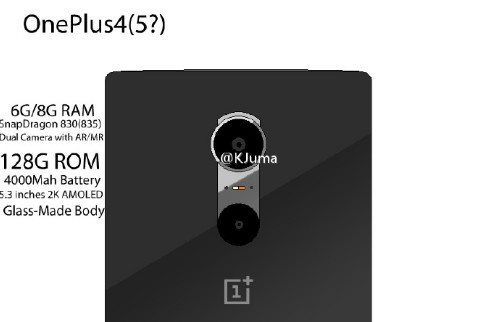 As we reach the end of the year, a majority of handset manufacturers have revealed their hand, and already moved forward and started planning the release of devices that will emerge in 2017. OnePlus had a fairly respectable year, offering the aggressively priced OnePlus 3. As the company prepares another handset for the tail-end of 2016, rumors emerge of what it might be working on for next year.

Although it is still fairly early, it looks like the next OnePlus handset could be a bit more luxurious, as it could offer glass construction. While this is nothing new in the mobile world, the company has been fairly quick to advance its design and use of materials, going from plastics to high-quality materials in the span of a couple years. Also the new handset could be the first to offer a display better than 1080p and feature a 5.3-inch 1440p AMOLED.

As for internal specifications, you can expect top-tier components like a Snapdragon 830 / 835, 6GB-8GB RAM, 128GB of storage, and a huge 4000mAh battery. The camera is where things change a bit more drastically, as it looks like the handset will offer the ever popular dual-camera setup. Naturally, this is a very early rumor and the specifications of the device could change before inception. But it looks like OnePlus could be creating one of the more enticing offerings of next year.