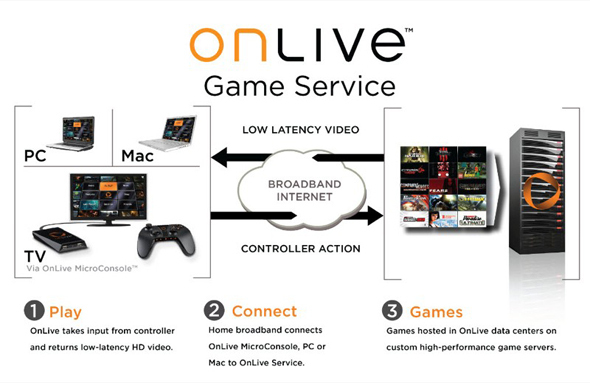 Speaking in an interview with MCV, OnLive Chief Operating Officer Mike McGarvey has confirmed a launch date of June 17 in the United States, with PC and Mac support included day one.

Subscriptions for the cloud-based service will cost $14.95 per month with games from THQ, Ubisoft and Electronic Arts being available at launch. Some of the titles include Assassin’s Creed II, Metro 2033, and Prince of Persia: The Forgotten Sands.

"We’re very pleased with the degree of publisher support received to date and have seen a rise in publisher interest in the OnLive Game Service as their focus begins shifting dramatically toward digital distribution," said McGarvey.

"Individual titles will be available for purchase or rental on an a la carte basis. Specific game pricing, including rentals, purchases and loyalty programs, will be announced prior to the consumer launch event at E3."

"We’ll also be announcing additional loyalty and discount programs for consumers in the coming months."

The promised micro console for TV use will not be available when the service launches in June.

A European release date has yet to be announced.

OnLive is a gaming-on-demand game platform, first announced at the 2009 Game Developers Conference. The service is a gaming equivalent of cloud computing, allowing users with a low-end computer the ability to play graphic intensive games. A 1.5 Mbps connection will be required to display games in SDTV resolution (typical output of the Wii) while 4-5 Mbps will be needed for HDTV resolution, such as those output by the Xbox 360 and PlayStation 3.