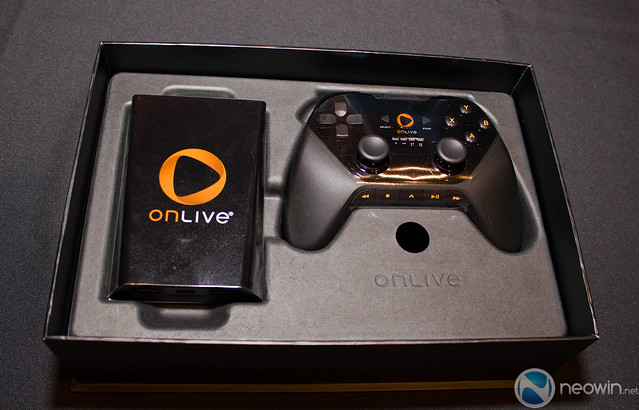 We've seen OnLive and their products before. They're the streaming game company that picks up titles and then delivers them over an internet connection. This year at CES they have announced their partnership with Vizio, the budget television maker with some pretty impressive panels.

OnLive is selling a standalone console as well as consoles integrated into Vizio TVs. The Marvell based chip is the same chip found in many BluRay players and OnLive has stated that they are looking at partnering with many vendors to license OnLive capability for BluRay devices. Also interesting was that OnLive had a solid connection and CES and the games were very playable with very little discernable lag. The rep assured us that we were quite far from the datacenters and the ideal distance is within 1000 miles.

Although performance isn't the same as a fully fledged PC, the iPad demonstration was quite interesting as well. The iPad was displaying the same game as the television and it was just as playable, with a little bit of detail lost. OnLive is not up to par with a fully fledged gaming PC, but the games available and its current performance work well enough for the majority of light to medium gamers. What OnLive has to do now is work with publishers to get NEW titles rather than ones that are a few months/to a few years old.

OnLive is also testing a Netflix like content system with a "pay one price and play all you want" type of rate plan.