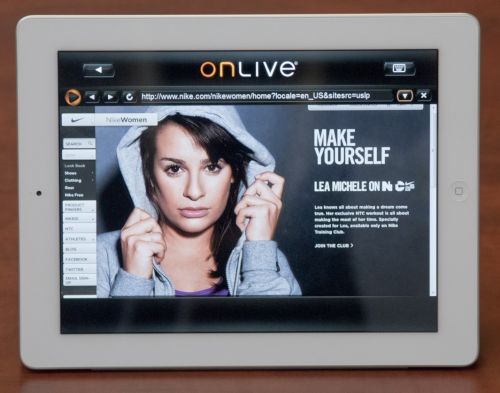 The web browser wars will be getting a new combatant later this summer and it comes from a familiar company. OnLive is planning to release its own web browser using the cloud-based streaming technology that it is currently using for its streaming PC game business. In a new interview at fan site OnLiveFans.com, the company's CEO Steve Perlman stated that the web browser should launch sometime this summer.

Because the OnLive web browser will be run largely by OnLive's cloud servers that mean, in theory, that the speed of the browser should be much faster than the traditional browers from Microsoft (Internet Explorer) Google (Chrome) Mozilla (Firefox) and others. The OnLive web browser would render plug ins such as Flash, Quicktime and others on the cloud server which should also increase speed. This will allow older PCs and Macs to run web sites at a rate they wouldn't be able to do otherwise. iPhone and iPad fans should also be happy with the OnLive browser since it should allow Flash-based apps to run on those devices where the Safari browser cannot.

This new approach does have some drawbacks, which were admitted by Perlman in the interview. He states, "The thing that we have to worry about with a browser that’s in the cloud, it is impossible for us to manage every possible website that could be harmful. In other words, we don’t want it to be a launch pad for someone to go and have a website that turns into a giant spam site that sends out millions of spam messages through our 10 Gigabit connection. We have to be a little bit cautious in what we allow." Perlman also doesn't see the OnLive web browser as a replacement for your usual favorite web browser, stating,  "What we would rather do is give you a browser that accelerates things that are tough to do with a local browser."

At the moment the plan is to release the OnLive web browser for free as part of OnLive's free portion of its streaming game service. However that could change if people abuse the experience. Perlman states, "“If people go nuts on this thing, and for example, it provides flash capabilities to iPad, you can easily see how people can go and just use it; forget the game service and just use it for that." OnLive plans to monitor the web browser's usage once it is released and Perlman states, "If people are being reasonable, that’s fantastic. We’ll let them go wild on it."