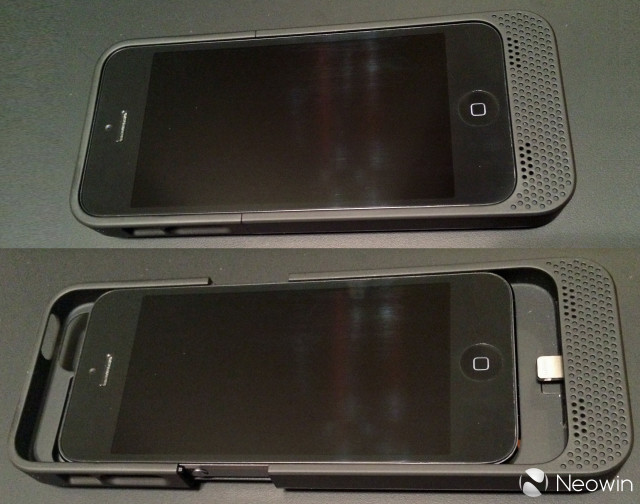 If you own an iPhone 5 or 5s and you use it as often as I do, you probably chew through your battery just as quickly. By 6pm, my phone has but a few drops of life left, not nearly enough to make it through the rest of the night. If you need to be out-and-about, carrying a USB battery pack tethered to your phone can be bulky and awkward. Instead of carrying an additional device, plus a cable, why not have it all-in-one? The Ontrion LifeCharge Battery Case is just that: It provides a protective shell for your phone and a battery that will give you about a charge and a half.

The case is plastic, coated in some sort of a satin/rubber material. It's semi-slippery yet semi-grippy at the same time, similar to the outside of the Lenovo ThinkPad line of laptops. This makes handling the phone is easy.

The rectangular design allows you to stand the phone up on level surfaces. There's a 45-degree bevel on the bottom sides of the case helping it fit comfortably in your hand, and the case itself is slightly lighter than the iPhone. A bezel recesses the screen by about a half-millimeter at the bottom of the phone and becomes nearly flush toward the top, but is still enough to keep the screen from touching a surface if you set your phone face down.

The buttons for volume up, volume down, silent, and power as well as the port for headphones are all recessed. In fact, they are recessed so far that I find it difficult to use them, having to either mash my finger in there, go in at an angle, or use my fingernail. If you use the headphones that came with your iPhone, you might have a hard time plugging them in and may have to use a fingernail to make sure the cable is secure. Unfortunately because the headphone jack is so recessed, you'll have to pull on the cord to get them out. Keep in mind that this isn't an uncommon problem for cases in general, but it could impact your decision.

Tiny holes in the bottom front of the case allow for sound to pass through from the speakers. While I'm sure most don't care about the quality of the sound from their phone, I noticed that the fullness of the sound was taken away. It has fewer lows and the mid-range turns tinny. This probably could have been avoided with a cone shaped port instead of a rectangle, but most people don't buy a phone for the built-in speaker anyway.

The hole for the camera has ample room and won't obstruct your shots.

It is very easy to add and remove your iPhone 5 or 5s from this case, which is one of the things I like most about it. Simply snap the case apart, slide your phone in, then snap the bottom charging section together and you're done. I once had a portable iPhone charger that was the same width and depth as the phone, but in no way other than the plug did it support itself. I always worried about snapping the connection, but with the LifeCharge Battery Case I can throw my phone in my pocket or a bag and not worry about something breaking or coming unplugged.

Not only can you use the micro-USB port to charge your phone, it actually allows you to connect to iTunes like you normally would. Honestly, I was surprised as I thought it was only for power. A huge benefit to having a micro-USB port is that you can buy a 15 foot micro-USB cable for under $3 and aren't completely screwed if both batteries die while you're at your Android wielding buddy's house.

You can check the case's battery capacity by pressing a button on the back. There are 4 LEDs to indicate the level of charge remaining. To begin charging your phone, just hold that same button for a few seconds.

The LifeCharge Battery case has a 2300mAh battery and can charge your phone roughly 1.5 times before needing to be charged itself. This is very intuitive, since the built-in iPhone battery is rated at 1440mAh.

The LifeCharge Battery case is available at Ontrion's website for $79.99 and is available in black, white, or gold. If you shop around you can find it cheaper at places like Amazon although finding anything other than black is difficult.  In the battery case market, you'll find this case falls into the median price range.

Things get a little more interesting if you shop around, as there appears to be other products that look exactly like the Ontrion LifeCharge Battery case, but with different branding and a cheaper price. There also appears to be two Ontrion websites, Ontrion.com and MyLifeCharge.com, that are related but have a different look and feel.

The LifeCharge Battery Case is a good product. It offers extra protection for your phone and has a very healthy sized battery. If you don't like the bulk of a case, it is easy to just store in a bag and then connect it to your phone when it needs a charge. The micro-USB is also a huge win. Unfortunately, as with most cases, access to the buttons and ports is made more difficult with the Ontrion LifeCharge, so you take the good with the bad.