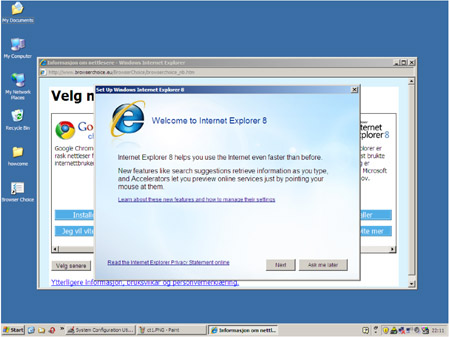 A spokesperson said, "This scenario is very easy to reproduce in a test lab, but would occur only in unusual cases in the real world. For it to occur with the Browser Choice screen, the user would need to have IE set as their default browser and have never configured it for use. Opera’s example, where a Windows XP user has rejected installation of IE 8 for the year it has been available but suddenly decides to install it is not realistic".

Lie also added, "When you've been through the 10 screens of IE settings, you are limited with what you can be bothered doing next".

This news coming just two days after Net Applications reported that Opera had gained only 0.02% market share for the month of March.

Opera has not yet decided if they will file a formal complaint with the EU. The EU already sued Microsoft for $1.44bn and could do again if they find Microsoft guilty of not following the antitrust law.