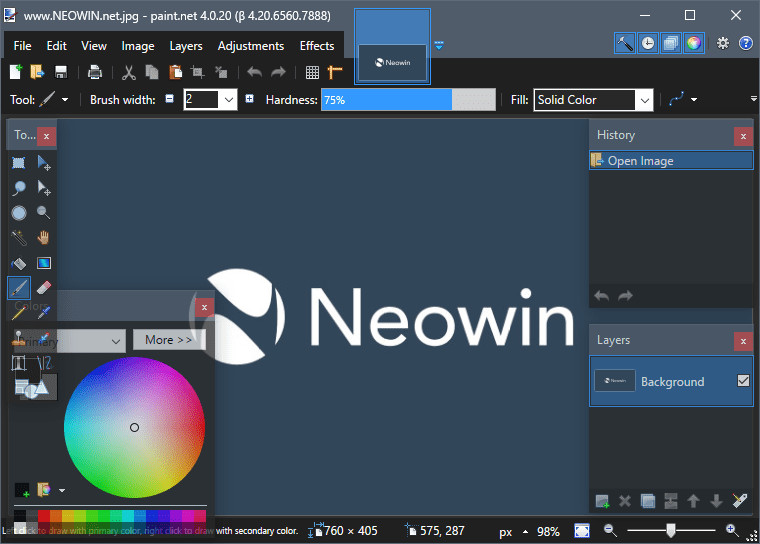 Please note that this is a BETA release of Paint.NET. If you are at all worried about crashes and potential data loss, then please do not install it. Also, it will expire in 12 weeks - an update will be available before then.

This build is not available via the built-in updater (mostly because it just takes a lot of time to get that thing hooked up). Once the final release is available, it will be offered to you through the built-in updater. The same goes for the Windows Store release, there's no beta build available yet.

Here's a quick overview of some of the bigger changes:

GPU-powered Effects! Some of the effects have been rewritten to use Direct2D's image processing system, and the results are phenomenal for performance. Gaussian Blur is actually fast now and no longer takes ages to complete for large images or radii, and the same goes for both Motion Blur and Radial Blur (although Radial Blur does currently need a pretty powerful GPU). A few other effects were converted for the sake of completeness and for my own learning, and there are two new ones (Morphology and Turbulence). This is where most of my time (the aforementioned "last 7 months") and sweat was spent: getting a GPU-based effect rendering system up and running end-to-end was no small feat! Expect to see more effects converted over to the GPU in subsequent updates as this tech matures. I am also planning to make the GPU available for plugins to use in a future update. 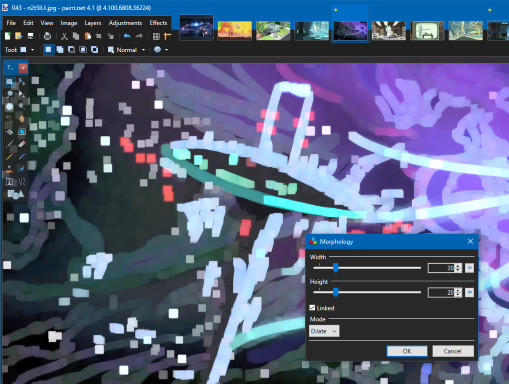 Copy/Paste for Selections. You can now copy the active selection to the clipboard, as well as paste from the clipboard to the active selection (all selection combine modes are supported). This copies only the selection, not the pixels that are within the selection. You can then apply the selection to another layer or image, or just save it for later. Because the selection is copied to the clipboard as JSON text, you can use external utilities to maintain them or even do processing on them (you aren't limited to Paint.NET's built-in selection operations, in other words). For example: if you want to save and reuse 5 selections, just open up 5 copies of Notepad and use them as a storage buffer. You can also use Paste Selection when a regular image is on the clipboard: if the image is from Paint.NET, the embedded selection will be used, otherwise the image's size will be converted to a selection (a rectangle anchored to x=0,y=0 with the same width and height as the image). More formal documentation for the data format will be available soon. 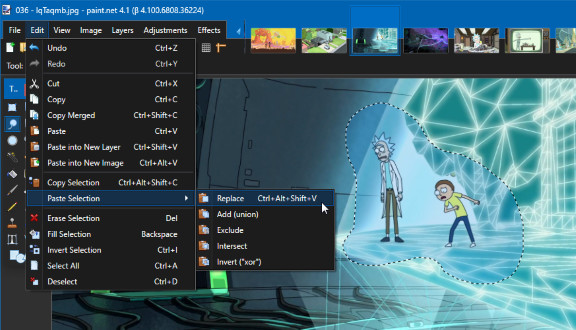 Bicubic resampling for the Move Selected Pixels tool. This can produce much higher quality results than Bilinear resampling. It is very CPU-intensive, so a fast CPU with 6+ cores is highly recommended if you plan to use it a lot. The default is still Bilinear, so if you'd prefer to always use Bicubic you can change it from Settings -> Tools. 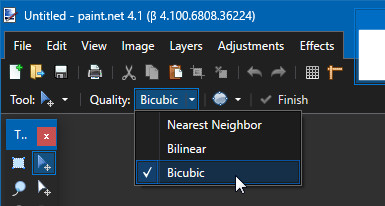 New +/- buttons for Tolerance and Hardness. This is a great quality-of-life improvement, especially for the Magic Wand when you're trying to find just the right value for Tolerance.