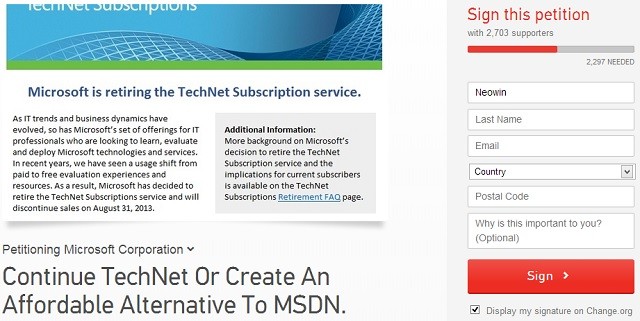 Microsoft announced earlier this month that they would be retiring TechNet starting on August 31st, saying they would not accept any new or renewed subscriptions after this date. TechNet has been used by many IT professionals and software evaluators to try out Microsoft's array of products for a relatively low yearly price, so this announcement was received poorly by the community.

With the move, MSDN becomes the only true subscription service available that gives access to the full array of Microsoft products; however it costs significantly more, as base subscriptions start at $699 as opposed to just $199 for TechNet. The price hike has caused a petition (the second petition to Microsoft this week) to bring back TechNet, or alternatively provide an affordable alternative to MSDN.

The petition on Change.org reads:

Currently the petition has almost 3,000 signatures out of a required 5,000 with the organizer, Cody Skidmore, asking for people to "double down on the pressure" and to not assume that Microsoft will easily back-peddle and reinstate TechNet. If you would like to see TechNet brought back, head to the source link and sign the petition.

Source: Change | Thanks for the tip, jorel!