Adobe revealed last year that it will be bringing its full-featured Photoshop for the iPad sometime this year. The announcement was major news since the firm confirmed that the iPad app would indeed be built on the same codebase as that of its desktop counterpart and that the apps would eventually reach feature parity. Apple too has long been advertising the arrival of the app, touting the prowess of the iPad Pro line. However, not much has been heard since the announcement back in October of 2018.

Now, a report from Bloomberg suggests that Photoshop CC for the iPad is on track to be launched by the end of this year and that Adobe will provide more information during its Max conference later in November. However, not all major features will be made available to users at launch. This isn’t a surprise since the firm originally stated that it would be releasing “a smaller set of features on the iPad first” for version 1.0. The company plans to then add features gradually. 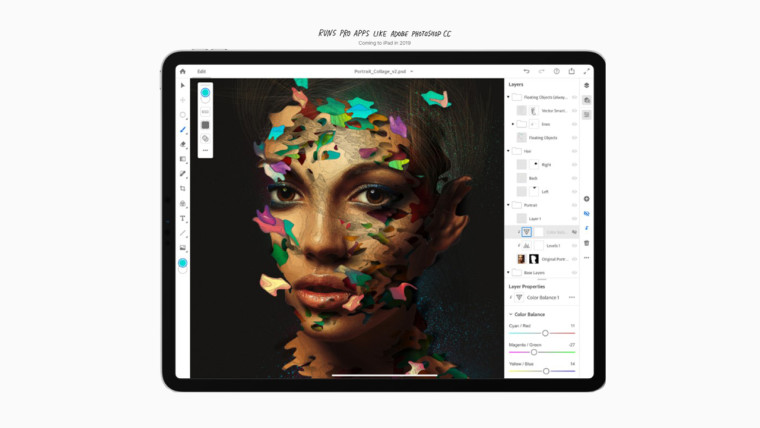 While it is expected that we won't see all of Photoshop’s capabilities make it to the iPad at once during launch, those that have been testing beta versions of the software tell the source that the app, feature-wise, “feels like a beefed-up cloud-based version of their existing iPad apps” – a far cry from the full-fledged Photoshop that the company has been promising. Features that are either omitted or are present in a less advanced manner include filters, the pen tool, custom paintbrush libraries, vector drawing, color spaces, RAW editing and more. Some testers termed the app “rudimentary” and added that the iPad version of the app seems inferior to competitors such as Procreate and Affinity.

Adobe Creative Cloud division’s chief product officer, Scott Belsky, said in an interview that the beta set of features would not represent the final version of the app for consumers. He added that more features would be added ahead of launch. Photoshop for iPad is said to bring in new experiences for modern touch-based devices. In the context of calling the app “full Photoshop”, Belsky adds that he wants to “say it’s the best product in the world for specific workflows and not have to apologize that it’s not full because that’s not what the customer needs”.

With the addition of the Cloud PSD file format, the company touts the app as being able to negate the need for importing, exporting, or converting to different formats, improving cross-device workflows. However, with strong competitors such as Affinity and Procreate already providing robust solutions, it remais to be seen as to what features finally make it into the public version and how the app is received by creative professionals when it does make it to the platform.

Are you looking forward to Photoshop on the iPad? Let us know in the comments.