The world is becoming more connected by the day, and nowhere is that more obvious than in the different "smart" devices that are available inside your home. While some devices are obvious candidates for connecting, such as your television with a Chromecast or Amazon Fire stick, it's clear that the "Internet of Things" is definitely starting to creep into our daily lives.

That's why I was intrigued when MiPow offered up their latest device, the Playbulb Color, for review. The device is billed as a multi-color LED light bulb with an integrated speaker that plugs into a normal E26/E27 socket and is controlled via Bluetooth. The Playbulb Color is currently not available for purchase, but is available via Kickstarter and will start shipping in early 2015. The question is, how does the device perform?

The Playbulb Color comes in a clear plastic case, allowing you to easily see what the device looks like while in the packaging. The fine print on the back of the packaging displays the requirements: Android 4.3 with Bluetooth 4, or iOS 7 or greater.

The bulb itself is fairly large compared to a standard LED bulb, and has some heft to it. The top looks like a standard LED bulb and houses an array of LED lights that can display a wide range of colors. Below that is a grille that allows sound to escape from the speaker. 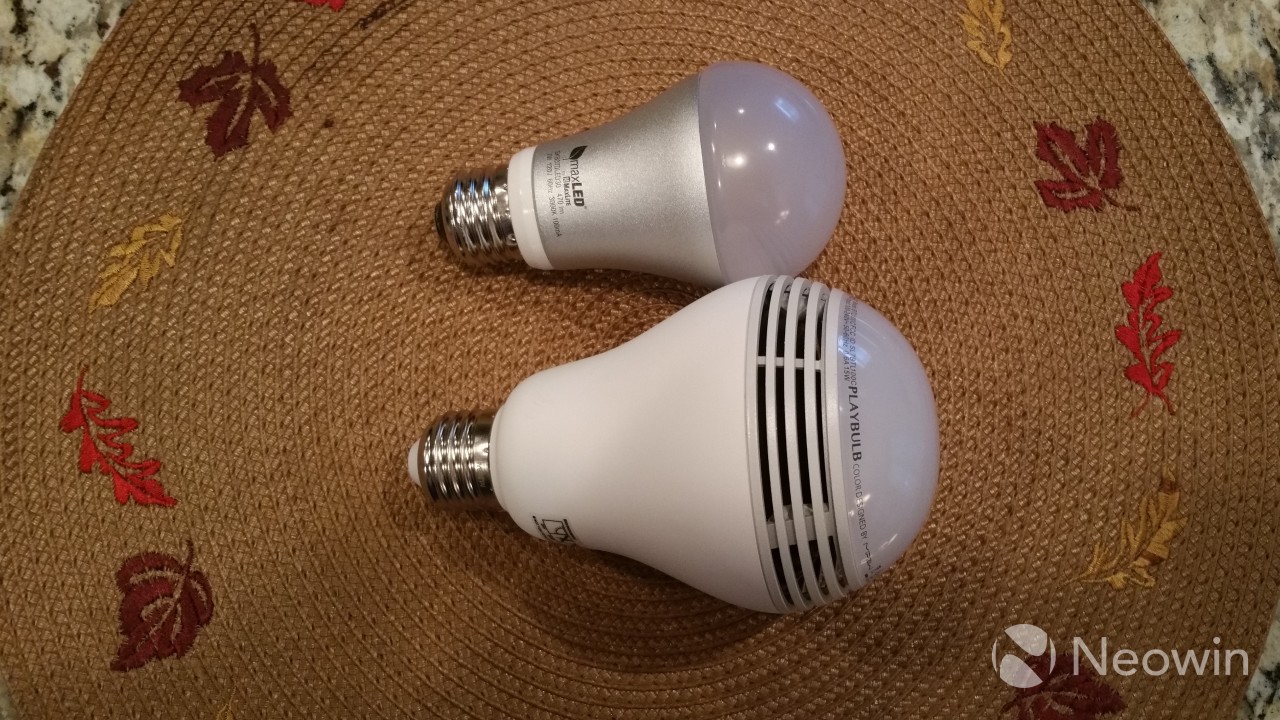 The Playbulb Color is quite a bit bigger than a standard bulb and while it worked in every lamp and chandelier I put it into, the extra size caused the top to be visible in some of the lamps. This didn't impact functionality at all, but my wife wasn't happy with being able to see the bulb in some of the fixtures, so it's something to keep in mind when deciding where you're going to use the Playbulb Color.

The device can easily be used as a regular bulb. Flipping on the light switch turns the Playbulb Color on with its standard white light. While I'm not an expert in lighting, the color temperature looked similar to the only other LED light I have in the house, so it didn't look out of place. The real power of the Playbulb Color is in the software, which I'll discuss later.

One area that I expected to be weak was the sound quality of the built-in speaker. However, that turned out to be an incorrect assumption: While lacking some bass, the Playbulb Color has great volume and sounds very good, with no noticeable distortion until the volume was maxed out. It's not going to replace your home theater setup, but it sounds like an average speaker and is much better than playing music on your mobile phone. Considering it's a speaker that's completely out of sight and is relatively small, it's quite good. 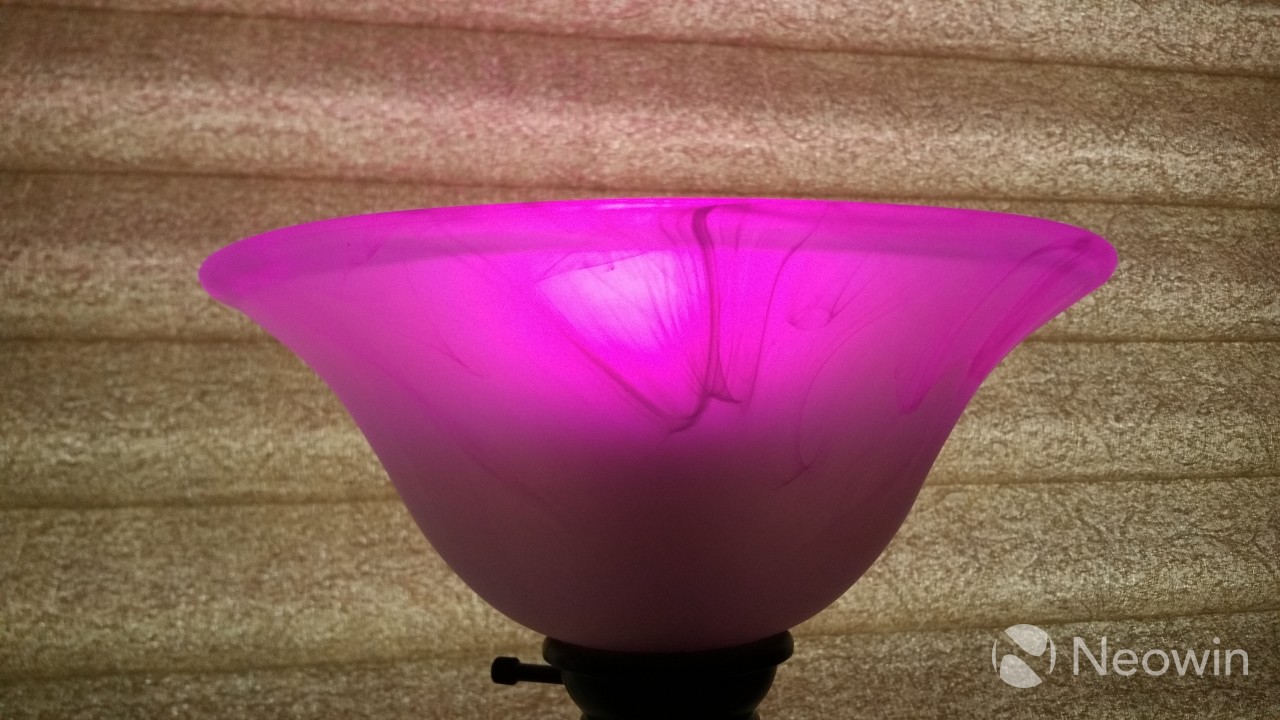 One thing that was interesting to note is the fact that the Playbulb Color takes longer to turn on than my other LED light. If I had to guess, it's because the device has a small computer to boot up when power is applied. While not a big deal, it was weird having to wait an extra 1-3 seconds for the light to turn on.

Without the free mobile app, the Playbulb Color would be just an oversized white LED light bulb. The app is available from both Google Play as well as iTunes, and is a free download. Unfortunately, there is currently no Windows Phone support.

The app is called PLAYBULB X, and can be used to control all of the devices in the Playbulb product line. Currently, that consists of the original Playbulb (white light only), the Playbulb Color, and the Playbulb Candle.

When launching the app, you're first presented with a list of Playbulbs that are currently powered up. Simply select the one you want to connect to, and you're done. The first time you connect to the Playbulb Color, you'll also be prompted to connect via Bluetooth in order to stream audio. When connected, the bulb makes a short beep letting you know the pairing is complete. 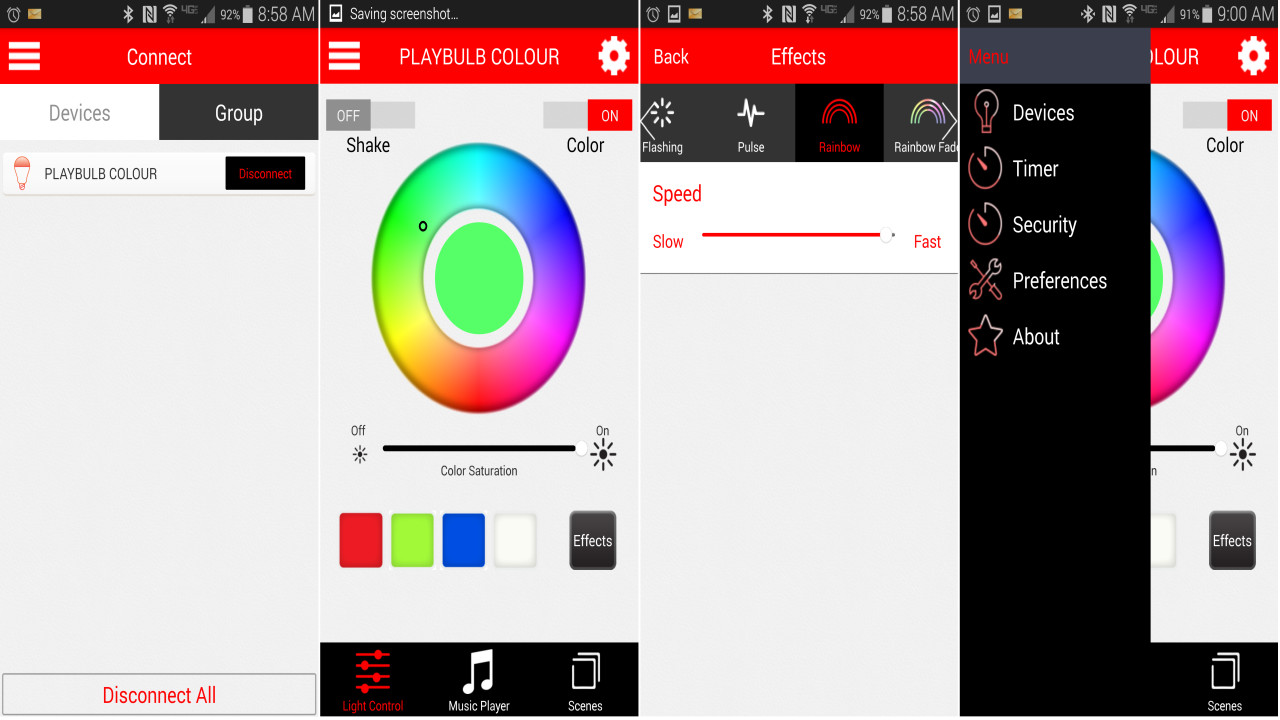 The lighting can be controlled by simply touching a color on the presented color wheel, while the saturation (which is more like brightness) is controlled by a slider right underneath the wheel. There's also a button labeled "effects" that let you make your Playbulb Color flash, pulse, or fade from one color to another. There's also some gimmicky features, such as shaking your phone to change the color of the bulb.

The app has a built in music player, but since the device is a Bluetooth speaker, you can use any player you want. I was able to play music from the app, as well as stream music from my Amazon Prime account with ease. The first time I played audio through the Playbulb Color, my dog started looking around in confusion because he couldn't figure out why the lamp was playing music. 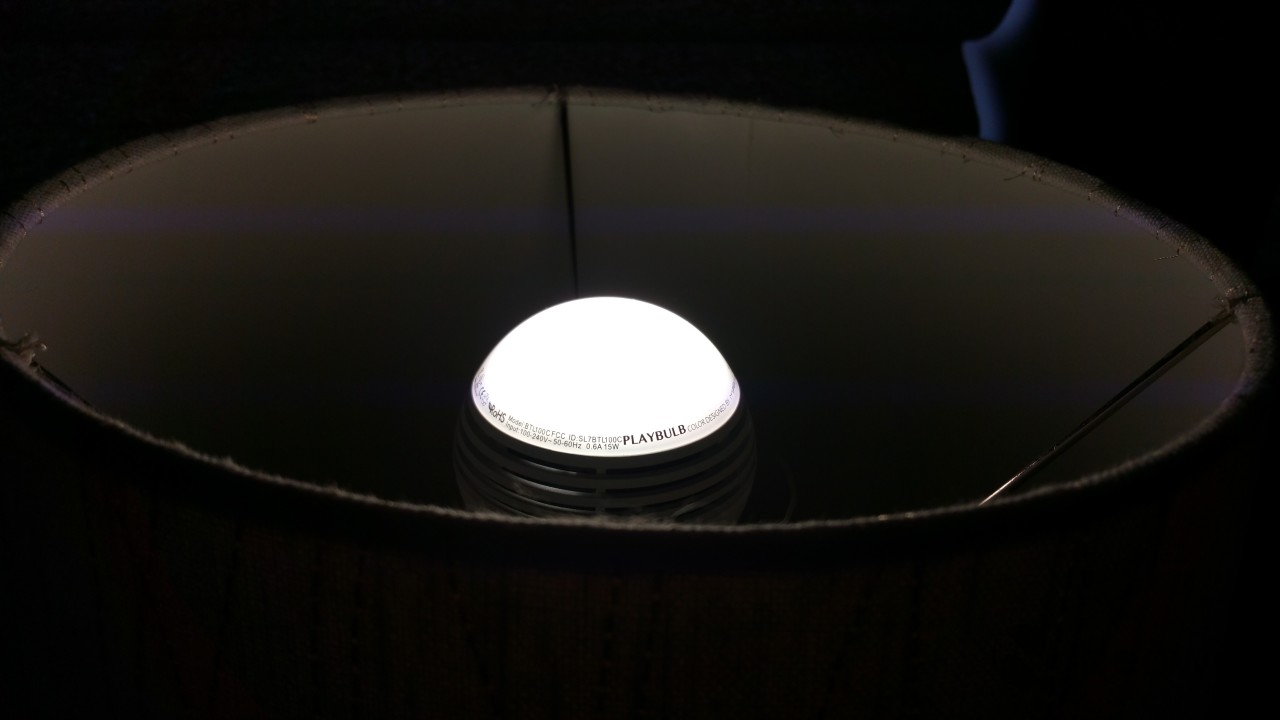 In addition to controlling the Playbulb Color in real-time, the app also lets you control the clock based on time using two different features: Timer and Security. While similar, the former lets you use the device like an alarm clock where you set the time and duration for the light to turn on and play music, or turn off while helping you fall asleep, while the security feature lets you set a specific time to turn the light on and off, useful for making a house appear active while away. Once you set the times, the information is stored in the Playlight Color itself, so your phone does not have to be nearby. It's important to note that if power is lost, the timer loses its data.

Although the application works as expected, it still needs some work, especially regarding the interface. For example, while first using it, I was able to make the Playbulb Color flash to the music, like an equalizer, even when using external sources like Amazon Music. I never saw that option listed anywhere and when I tried to use that functionality again, I wasn't able to figure out how to start it. The Timer menu is similarly confusing, providing a host of options but none are very intuitive.

My biggest concern about the Playbulb Color revolves around security, or the lack thereof. The device is extremely easy to use, and there were no apparent safeguards. Download the app, select the bulb, pair with Bluetooth, and you're done. This makes for an extremely user friendly experience, but that means there's nothing in place to stop your neighbor from controlling your light or playing music through your device. In the future, MiPow needs to add a form of authentication to the device, especially if they become popular.

The Playbulb Color is a pretty cool device. The colors are pleasing, and it's nice to be able to set timers and on/off schedules, and have them work independently of your phone. The speaker also sounds much better than I expected from the device. If MiPow can improve the app and add in some security to prevent neighbors from controlling the device, they'll have a real winner on their hands.