Market research from US firm TDG claims that more PlayStation 3 owners have their consoles connected to the Internet compared to the Xbox 360 or Nintendo Wii, Neowin has learnt via Eurogamer.

The survey of 2000 adult broadband users showed that 78 percent of PlayStation 3 owners have the console hooked up. Xbox 360 owners were not far behind with 73 percent of respondents who owned the console saying it was online, while the Wii came bottom with just 54 percent of its owners connecting the console to the Internet.

However, the report from TDG also seems to indicate that the number of PlayStation 3 owners was the lowest, with just 382 compared to 453 for the Xbox 360. The Wii had by far the most owners though, with 707 respondents appearing to own the console.

TDG concluded that a third of all broadband households in the United States have a console connected to the Internet - something which TDG's Michael Greeson puts down to people not just looking to "enhance their gaming experience", but also "to access the growing variety of online media." 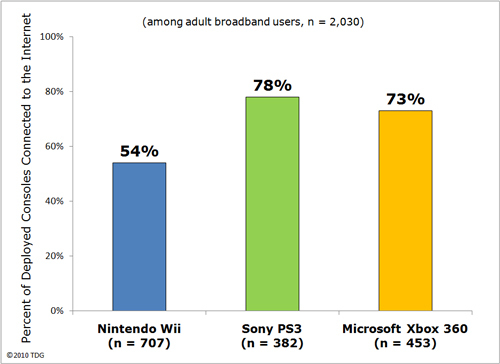