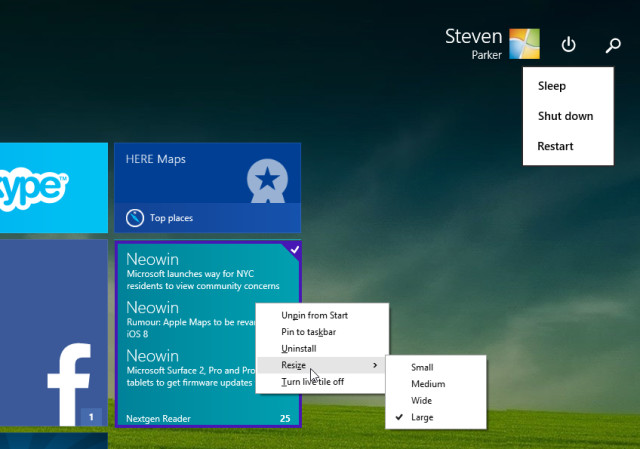 The Start screen now has a mix of modern and traditional mouse menus.

When Microsoft mistakenly made it relatively easy for anyone to update to the Spring Update for Windows 8.1 (also known as the Feature Pack for Windows) last Friday, at least one site is claiming that this was merely a way to test if the update mechanism worked properly, most likely because of it's multi-stage update requirement, rather than one huge one like we would expect to see with a Service Pack.

Chinese website PCBeta is claiming that build 17031 may just have been one build that was used to test the update method; and as we already know, Microsoft pulled the files shortly after the news broke on how to edit the registry to "officially" update through Windows Update.

Microsoft is expected to announce the update at the Build developer conference which takes place in early April, possibly giving the company more than a month to finalize a newer build for distribution. Earlier reports suggested that Microsoft had already signed off to RTM and delivered the update to OEMs, so while this all may be possible, it's anyones guess really and we'll just have to see when it is announced on the day.

The latest leaked files, which are now only available through torrent or file sharing websites, could be installed straight over the previous leak so it's likely that if a newer update is released, the same will be possible.

Modern apps can be pinned, switched and controlled all from the taskbar with the update.

The Spring Update adds features for desktop and mouse users, such as Modern app taskbar switching, a title bar in app that allows minimizing and closing, as well as desktop like context menus among others which can be seen below.

Since Microsoft has yet to confirm anything about this update, including the official name for it we'll probably have to wait until the Build conference to know for sure either way.