Messaging apps like Skype, WhatsApp, and Facebook Messenger have boomed in recent years, due in great part to their flexibility and universality. Meanwhile regular SMS texting has seen very little growth within the past decade. That seems to be changing though as more phones and carriers begin to support Rich Communication Services.

It looks like some Windows 10 Mobile users are able to join the party, as the service was just spotted by GMR Tec on Vodafone in the UK. The feature allows users to see text indicators in real-time, letting you know when the person on the other end “is typing” a message, or when your message has been “read”. iOS users should find this familiar, as it’s something that’s already available on iMessage. 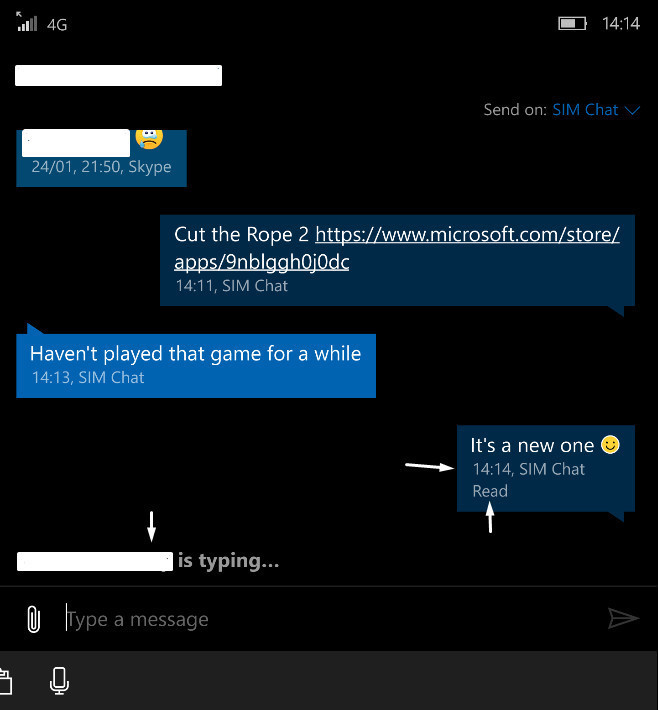 The difference with this service is that instead of being confined between one messaging app, it’s implemented within regular SMS texting, though some carriers have released separate apps (some know these as joyn and others as Messaging+). In the above photo, you'll notice at the top, a change from the usual "SMS Text" to "SMS Chat", which according to Microsoft means that your carrier has an RCS-compatible messaging service available to you.

The feature is carrier dependent, and support must be added through a firmware update, though newer phones may already support it out of the box. T-Mobile US brands this service as Advance Messaging, and has already begun to support it along with AT&T.

“With T-Mobile Advanced Messaging, you won’t need to search out, download, install, setup and register an extra app to get all that and more. It just works. Right out of the box. And, even more important, because Advanced Messaging is built on the RCS standard, in the future, your real-time chats won’t be held inside a single app or platform ecosystem.”

It's good to know that the texting experience is getting a much deserved upgrade, though it may take some time before many of you get to take advantage of it. In the meantime, you can watch it in action in the video below.