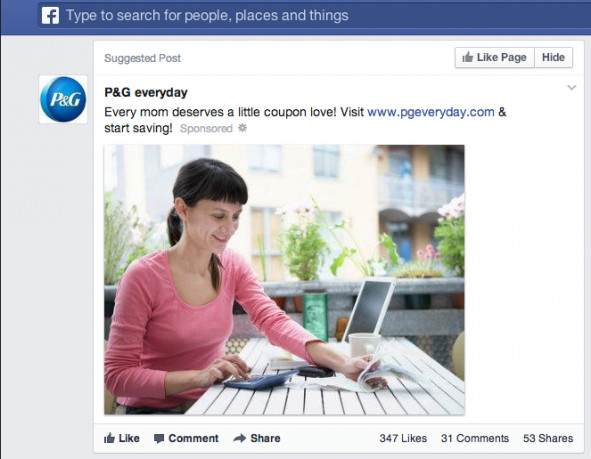 Good news everyone! All the complaining surrounding Facebook, its UI and its ads has finally had an effect on the company and they’ve started listening to feedback and making changes. And by that we mean Facebook won’t change anything and it will just serve you more intrusive ads.

Facebook already offers ways for advertisers and companies to upload and promote videos on the social network but now it wants a lot more money to put those clips directly in front of users. The idea is to capitalize on all the young people that spend time on Facebook in “prime time” slots (if you can call it that) and take a chunk of the ad money that has traditionally gone to TV.

According to this report, such an ad would cost between $1 and $2.5 MILLION a pop, depending on how many people are targeted. The clips would be 15 seconds long, the same length as an Instagram video, so that people find them familiar and aren’t put off. And users, as noted above, would “only” see one ad in about 20 regular posts.

Mark Zuckerberg is reportedly very interested in limiting how many times a user sees an ad so as not to become too intrusive. He’s also interested in having HD content with clear video controls so users feel in control and don’t find the whole experience infuriating. Regarding people’s reactions to ads shown on the social network he said:

One of the things I watch most closely is the quality of our ads and people’s sentiment around them. We haven’t measured a meaningful drop in satisfaction.

If we were to make a suggestion we’d say Facebook should simply implement the Premium/Ad free model that Neowin has. We offer a subscription where for as little as $2/month you get a completely ad-free version of our site, plus a lot of other perks. And that sure as hell beats having to watch ads while you're trying to stalk your ex.

Right now these plans aren't official, but they may come to fruition soon enough, and if that’s the case Facebook may get a little worse for all of us.

Are you folks still using Facebook? Or have you already jumped ship to other platforms such as Google+ or Yammer? And would a subscription model for your social networks be something you’d want? Let us know in the comments below.