When most people need a wireless router, they simply go to their local electronics store and pick up the cheapest device they can find.  While there’s nothing wrong with that approach, I’ve experienced several less-than-stellar routers with this method: either the range wasn’t very good or the box stopped working after a few months. That’s why we were intrigued when we read about Amped Wireless's R10000G wireless router that allegedly can cover a 10,000 square foot home with ease.

The device itself is rather nondescript: A basic black box with a couple of antennas that screw onto the back and some standard Ethernet ports. Setup of the box is also relatively straight forward compared to other similar devices. Users hardwire a PC with DHCP to the router, enter a default URL to get to the setup screen, and answer a few questions to finish the configuration. After rebooting, the basic configuration is complete although there are many more features to play with. 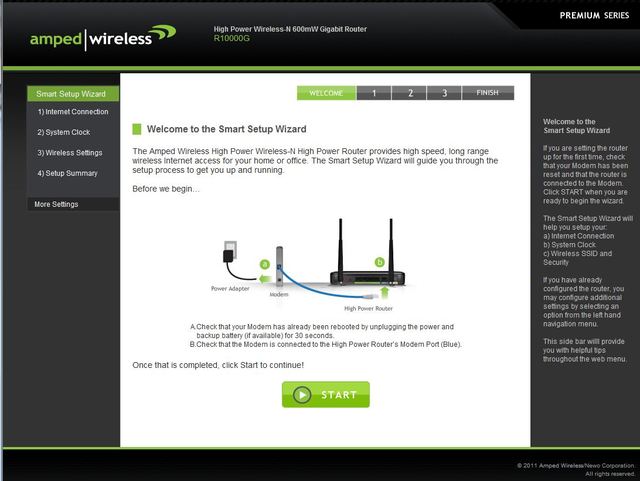 After the initial setup, we were extremely disappointed with the router’s performance. Signal strength was low and download speeds from the internet were slow. This seemed counter-intuitive to us, so we decided to try out their Wi-Fi analytics tool that can be found on the Android marketplace and is a free download.

The app is not limited to Amped Wireless products and is a good way to see what other routers are sending their radio waves through your house.  After running the app, we saw our problem: There were a half-dozen devices all using the same channel as we were. The scanner showed us that nobody else in the neighborhood was using channel nine, so we changed the setting on the router and instantly our performance increased to where we expected it. Even though we wish the router would’ve been smart enough to put itself on a non-cluttered channel automatically, the scanner is a very handy tool and we highly recommend everyone check it out to see what your own setup looks like. Unfortunately, it is only available for Android devices. 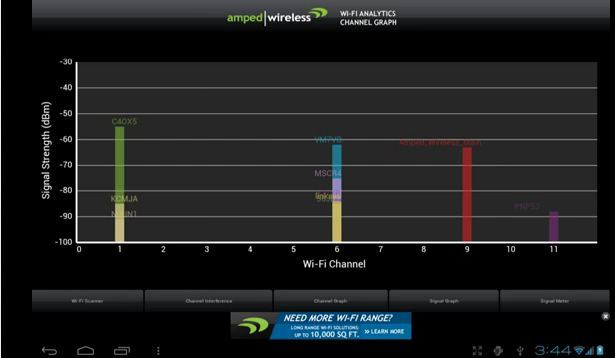 We used four different devices to test: An IBM Thinkpad, a Motorola Xoom, an Amazon Kindle Fire, and a wireless Playstation 3. The Amped Wireless router lives in the basement of our two-story, 1,700 square foot home while the PS3 is two floors higher in the master bedroom. While many reviews focus on synthetic benchmarks and make note that one device is X% faster than another, we decided to go with more real-world usage tests to see how the R10000G compared to our old D-Link DGL-4300 108G Gaming router.

Hardwired performance on the Thinkpad was on par with other gigabit routers on the market, but the company makes no claims that their wired speeds surpass their competitors. Where the router shines is with its wireless capabilities.

The first thing we noticed was the fact that all of our test devices had full bars no matter where in our house we went. From the basement to the first floor to the second floor, all rooms registered the maximum signal strength. This was in stark contrast to our D-Link DGL-4300 108G Gaming Router that struggled to provide two bars on the second floor of the house. Streaming Netflix with our original router produced buffering errors, but with the Amped Wireless router we never had an issue during any of our tests and all programs began in HD. This alone was a great improvement and although it doesn’t prove the “10,000 square foot coverage,” houses that currently have poor signals in certain areas can certainly improve with the R10000G. 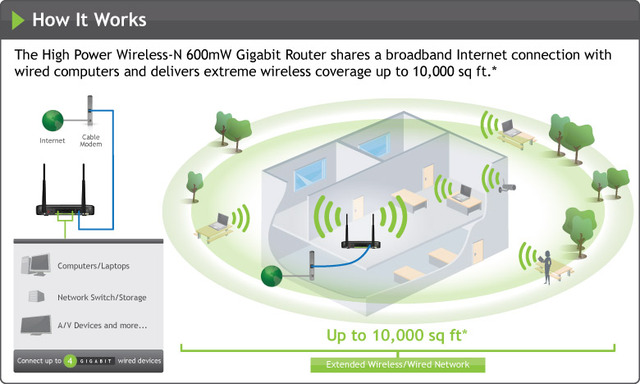 Next, we decided to see how well performance worked outside of the house. We had visions of being able to visit our neighbors and still connect to the device, but these hopes ultimately fell short. Roughly 20 feet from the house our signal fell to half. Surfing the web was still possible, but was noticeably slow. Streaming from Netflix was not in high definition and we experienced some buffering issues. Overall it was usable in a pinch, but not a great experience.

Moving another 15 feet towards the street reduced the signal to a single bar and we were unable to load Google’s search page, making it unusable. This is actually the best of both worlds - exceptional coverage in our own house, but not so good service for potential war-drivers passing by. We suspect that we’d get much better coverage if we moved the R10000G to the second floor of the house so that the signal didn’t have to pass through poured concrete walls to get out into the world but had no reason to test this as our main use is in the house or maybe as far as the attached patio, all of which worked great. 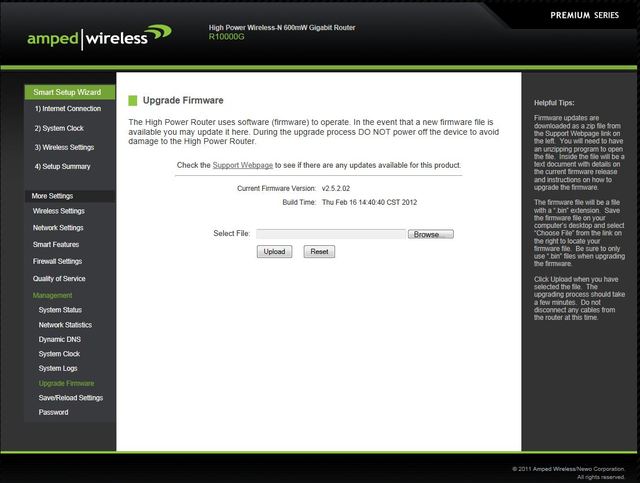 It’s usually a good idea to upgrade the firmware on a device to the latest revision before you start using it, so that’s the first thing we did after the initial configuration.  Unfortunately, the process was not as streamlined as some other wireless routers we’ve seen. While there is a “firmware” button in the interface, all it does is take you to the company’s website. From here, the user is expected to determine whether the update is required or not, and if it is, it must be manually downloaded to the host PC and then selected from a browse menu. It would’ve been nice to see this streamlined where a click of a button automatically goes out to the site and downloads the latest version if required.

After upgrading the firmware, we were unable to access the network from our connected device anymore. We hardwired a DHCP client directly to the router again and realized that the firmware upgrade deleted all of the settings we previously configured. We reached out to Amped Wireless about this issue and they confirmed that there’s a bug with the latest version of the firmware and that there “should be a firmware soon to address this issue.”  Until then, it’s recommended that users save their configuration and then simply reload it later. This is probably a good idea after your initial configuration, even if you’re not upgrading the firmware. 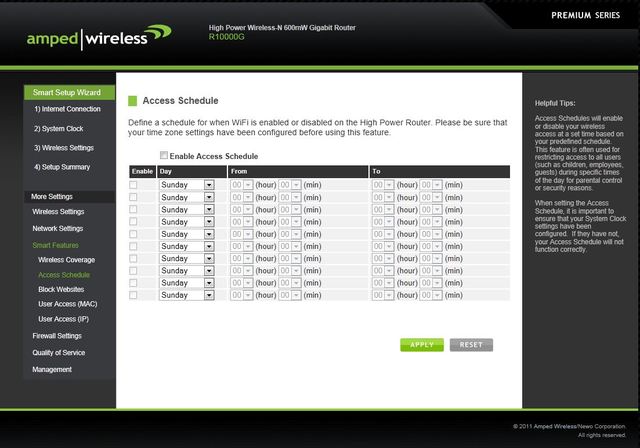 We were also disappointed with the overall setup of the user interface. Each time you connect to the interface you’re greeted with a “Welcome to the Smart Setup Wizard” screen and that’s very confusing when you’ve already set the device up. In order to dig into the other features you have to look for the “More Settings” button on the left hand side of the setup screen, and that will open up your common functions such as port forwarding and logging. In addition we were surprised that there’s no option in the GUI to reboot the device – in order to power cycle it, you need to physically access the router.

The R10000G also offers some interesting configuration options such as reducing the signal output, thus reducing the range (to avoid war-driving as previously mentioned), the ability to block specific URLs (to stop your kids from accessing Facebook, for example), and the option to turn Wi-Fi off completely at certain times. While none of these are particularly groundbreaking, they’re nice touches to an overall great product.

Although we couldn’t validate Amped Wireless’ 10,000 square foot coverage claims, we can say without a doubt that this is the most powerful wireless router we’ve had the pleasure to use. Although there are a few issues, notably the somewhat kludgey interface and the loss of settings after upgrading firmware, these issues should be updated in a future software release. The overall hardware is top notch and does what it’s supposed to – gets you online without a worry.  We highly recommend the Amped Wireless R10000G.

UPDATE: Based on user comments, we reached out to Amped Wireless to ask about their (lack of) support for DD-WRT. We received the following response from the company:

Our firmware has been specifically designed and tuned to  maximize the speed and range of the router using our amplifiers and antenna combinations.  Any 3rd party firmware can cause a severe reduction in performance or cause the amplifiers to malfunction and/or overheat.  We do not support 3rd party firmware such as DD-WRT for the protection of our customers and our product performance.