Death certainly lives in Darksiders II, swinging his dual-scythes and inflicting a world of pain to redeem his brother War from his crimes committed in the first game. Having played and loved the original Darksiders, in the two weeks following the PC release I've been casually making may way through Darksiders II thanks to THQ. 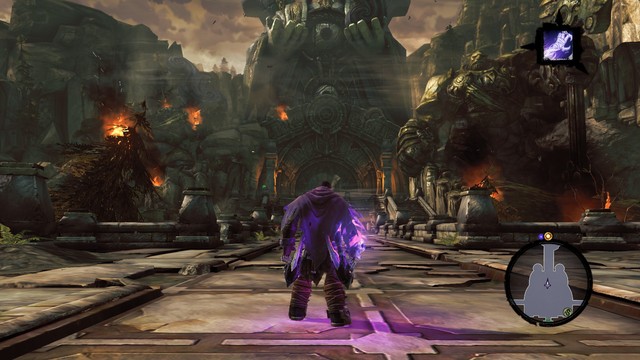 It's all about the Four Horsemen of the Apocalypse in Darksiders II, so this time around you are taking control of Death just like how War was the protagonist in the first game. War gets in a bit of strife in the first game, such that he is imprisoned by the Charred Council for starting the apocalypse prematurely, and causing the complete destruction of Earth. In the sequel, Death knows War is an honorable horseman, and so must try and do whatever it takes to clear War's name and restore Earth.

As Death goes about his quest to restore humanity and clear War's name, he must visit a number of realms where he faces all sorts of enemies. The sum total of these realms is considerably larger than the first game, which means there is even more to explore, collect and pillage - so you'll likely be spending a good deal of time roaming around and seeing what the realms have to offer as I did. 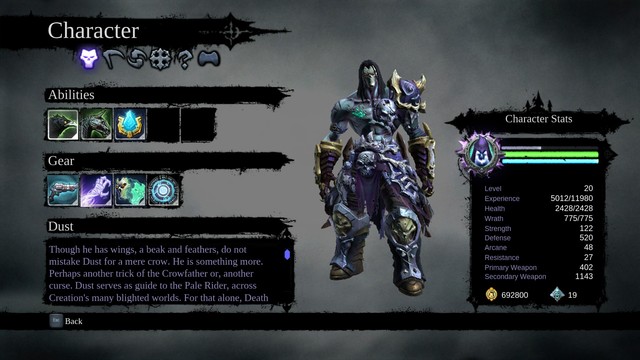 Apart from increasing the size of the world, there are a number of other great improvements that have been made to Darksiders. Role-playing elements have been introduced that gives you a lot more control over how you play the game. Each kill you make earns you XP, which eventually levels you up and you receive skill points. These skill points can be used to unlock a variety of skills and abilities that can be activated during combat alongside regular hacks, slashes and combos.

Also, rather than simply having a few fixed weapons that you gradually accumulate during the game, Death can now find and replace his weapons and armor as he explores. Items such as scythes, hammers, boots, amulets and pauldrons may be dropped by killed enemies and come out of chests; each item has its own stats, and so as you go you can pick and choose what you want your character to look like and fight like. 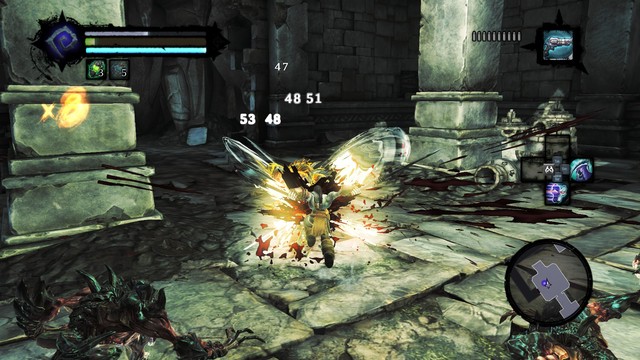 Naturally the inclusion of a multitude of weapons and armor makes the game more interesting to play, as you must constantly be on your toes to ensure your gear is the best it can be. If it isn't you can perhaps spend the coin you find throughout the game to buy new and awesome gear. I was also glad to see that instead of finding chests filled with health, you can now carry around health potions that can be used a critical moments like during boss fights - instead chests are loaded with the aforementioned gear.

The actual gameplay of Darksiders II is, for the most part, divided into two groups: combat, and platforming puzzles. You'll be fighting groups of enemies in one area, and then in the next you'll need to traverse walls, gaps and other elements in often challenging platformer-like puzzles. Both these elements can be immensely fun, such as pulling insane combos on your enemies or jumping from wall to wall, but I do have one issue.

It's the repetitiveness of the gameplay formula; basically throughout the entire game I felt as though I was simply alternating between combat and platforming puzzles in different areas, with a couple of boss fights thrown in. Occasionally you would unlock a new power or new ability that expands what you can do in either the combat or puzzle arena, but it wasn't enough as I still felt the game dragged on a little bit in the second half with repetitive gameplay. 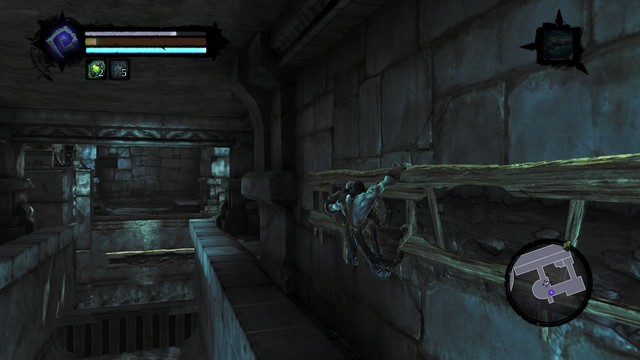 Luckily there is one other element of gameplay that I really enjoyed, and that is the boss fights, which you'll be glad to hear there are a lot of. In each of the realms there are several boss fights you must undertake, and each of them requires different strategies and gear to defeat - something which I greatly enjoyed as a break from regular gameplay.

I also really enjoyed seeing what sort of bosses Vigil Games concocted. Graphics-wise the game isn't particularly impressive, but what I enjoyed more was the composition of some world elements and particularly the bosses. Around half way through you have to fight this absolutely gargantuan beast, constructed of multiple parts, which was perhaps the visual highlight of my gaming experience in Darksiders II.

You may wonder if unimpressive graphics affects the enjoyment of the game, and at least for me I didn't think so at all. Darksiders II is a fantasy game, so realism doesn't really come in as an important factor and you can enjoy the stylized combat without needing movie-quality textures on the enemies or environments. 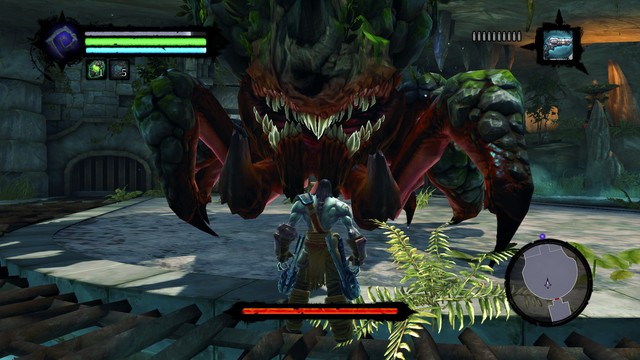 As the story of Darksiders II is a natural progression from Darksiders, following the quest of Death is interesting if you want to complete the saga from the first game, but overall I felt as if the game's story wasn't as strong as the first. Don't get me wrong, it definitely ramps up to exciting levels towards the end, but there were several lengthy parts of the game (I'm talking 6+ hours here) where you're basically told to go find some stuff with very little narrative progression; these parts can get somewhat boring without a story to follow.

Luckily in addition to the main story there are several side quests that you can undertake, as well as numerous collectible objectives such as finding book pages for Vulgrin. The addition of these extra tasks greatly increases the value of the game beyond what the main quest already provides: it took me 19 hours to complete the main game and just one of the side quests, so I could easily spend another 5+ hours completing everything.

While the visuals aren't particularly impressive, a shout-out must be made to those involved with the sound design. Everything from the musical score that accompanies parts of the game to the sound effects - and especially the voice acting - is extremely well done. 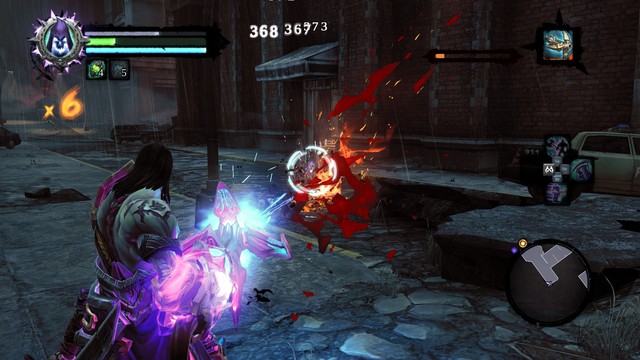 As Neogamr is a PC site, it's time to mention how Darksiders II performs on a PC. I'm sorry to say, but Darksiders II is a console-to-PC port, so I was greatly disappointed by a few aspects of the game. To start, the default keyboard bindings are atrocious so I needed to fix those pretty much straight away. Then, occasionally the game tells you what keys to press, but instead of saying "E" for the action key, it just shows a confusing, generic key image and makes you guess.

But it doesn't end there, because in the menus it seems like console 720p imagery has made the switch, so you'll occasionally see low quality images and textures in the menus. Towards the end of my gaming experience THQ released Patch #2 which addressed some of these 720p image issues, but the key binding problems still remain. 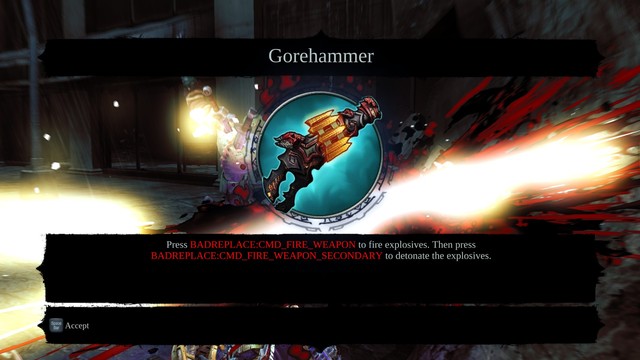 Finally, while the performance is quite good (constantly over 60 FPS with my quad-core Intel CPU and NVIDIA GTX 560 Ti) there are no graphics options to speak of, and the VSync option didn't work until the latest patch. The graphics quality overall indicates that this game was definitely designed for current generations of consoles, and not PCs.

At the end of the day Darksiders II is an enjoyable game that improves in many ways from its predecessor, introducing some great RPG elements. However it's a console-to-PC port that you're going to notice, and some gameplay and story elements are somewhat questionable. That said, for $50 you'll pick up a game that easily has 20 hours of gameplay, and once you look past some minor blemishes it's one of THQ's decent games.