When I look back across all the Xbox 360 exclusive games, the Gears of War series is the one that I, without a doubt, enjoyed the most. The third-person mechanics, engaging storyline, fun co-op and multi-player, and epic action sequences made for a great series of games, and with the recent release of Gears of War 3 I was really hoping that the series would end on a high note. 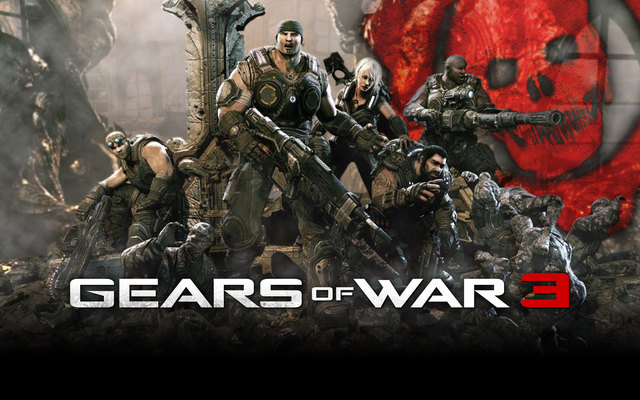 The premise of Gears of War 3 is you are continuing the story of Marcus Fenix, and his group of COG soldiers called Delta Squad, that are attempting to rid the planet Sera of the “Locust” alien infestation. After the events of Gears of War and Gears of War 2, the civilization on the planet has been left in ruins after several attempts to rid the planet of Locust once and for all, and this time Marcus must locate his father if he is to stop them.

What I have described above certainly does not do justice to the epic storyline that is present across the series, and especially in Gears of War 3. I won’t go into too much detail over the plot as you should experience it for yourself, but there are plenty of turns, emotional moments and epic battles that must take place if you are to stop the Locust forces.

From what I remember from playing the first two games, the storyline does not compare to what has been achieved in GOW3. Epic Games have managed to increase the tension and add a whole new cinematic feel that makes every moment of the game exciting, fast paced and intense. The variety of locations, introduction of new enemies and full 4-player co-op certainly helps elevate this game to become a spectacular end to the current series. 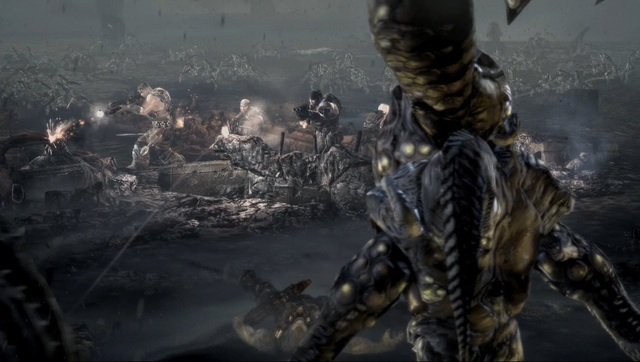 Just on the co-op aspect of the game, at all moments through-out the game you are with a team of four, unlike GOW or GOW, so at any point in the story you can choose to get together with your mates to enjoy the action of GOW3 either online or locally on the console. I played the game through the first time completely in single-player (on Hardcore difficulty), and while some scenarios and action sequences are designed for co-op, it is certainly enjoyable and not excruciatingly difficult to play through alone.

Gears of War 3 also introduces a few new mechanics that feel right at home in the series. The first one that I was extremely pleased about was that your AI teammates can now revive you, whereas previously you would simply have died as soon as you got knocked down. You can also select targets that your AI teammates can focus fire on, leading to some strategy while playing by yourself. It’s not much, but these little things just feel right.

However GOW3 does not go over the top with introducing new things: you still play in third-person, you still have the Lancer as your main weapon, you still enter cover, run weirdly and have a very similar interface to the game. You do get several new and exciting weapons, vehicles and characters introduced, but it’s not so many that it feels like the series has been brought too far forward into new realms outside what the series should be.

Another aspect of the game that was extremely good to see was the variety in locations and scenery between acts and chapters. The location in the final chapter (which I won’t spoil) and destroyed city were simply stunning in terms of visual quality, and graphically the Xbox 360 was capable at delivering fantastic smoke, light ray and high-textured graphics at (most of the time) a smooth framerate. It didn’t improve loads over that of GOW2, but it certainly felt graphically fantastic – especially the frequent explosions which are more beautiful (is that possible?) than I have seen in any other game. 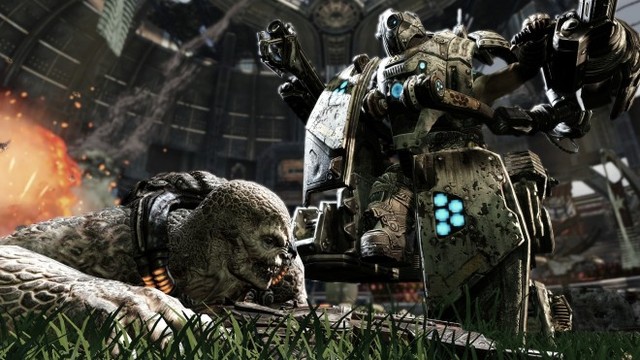 Accompanying the fantastic visuals is immersive surround sound. If you have a setup capable of full surround sound audio, you will definitely get the most of it with Gears of War 3. The great explosions boomed out of my subwoofer, enemies and environmental sounds could be heard from all directions and the orchestral score was fantastic at capturing the mood of the scene. I would give the game full marks for both the cinematic feel and the fantastic sound design and effects.

Keeping up again with Gears of War tradition is the great multi-player modes and overall online competitive and cooperative gameplay. Included, of course, is the classic Versus mode in which you can play gametypes like Team Deathmatch, King of the Hill (capture the base style), Capture the Leader (capture and hold the enemies’ leader to win) and more. All modes are extremely fun and faced paced, and while I preferred Team Deathmatch the most, the other modes are still worthy inclusions.

Horde mode also makes a comeback, but this time with more strategy. You must protect your base from the attacks of the Locust, and you can buy and build defences to help protect your base while you and up to three others battle 50 waves of enemies. It is, again, fun, cooperative and an improvement on previous games. Alongside Horde mode is the new Beast mode, which involves the opposite – you buy Locust enemies to send at the humans in 12 waves of fun with up to three others.

There is definitely no shortage of online gameplay in Gears of War 3, and this is compounded by a great levelling system. While you play through the campaign, as well as other standard multiplayer, you unlock levels depending on your performance and these levels go to unlocking new characters, performance ribbons and the like. The addition of the campaign into the levelling system means that everyone can be included in the levels, and by the time you finish the campaign you should have already unlocked several characters as you head into multiplayer. 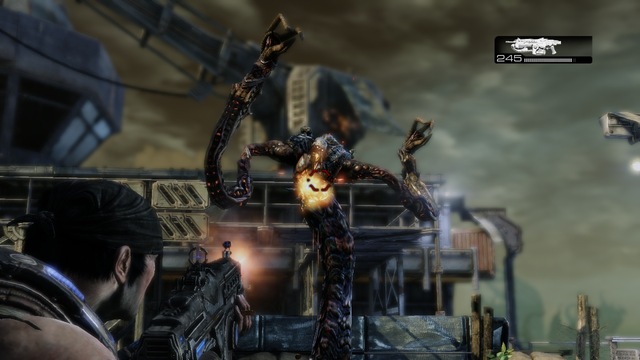 Also worthy of a mention is the “Arcade” mode of the campaign, which sees you play against your teammates to rack up points for kills and things like that. In this mode there are no cut scenes or dialogue and you can add mutations for more fun, so it’s intended for some co-op fun after you have played through the campaign in the normal mode –adding of course to the replay value of the game.

As I played through the game I was really struggling to find faults to the game, but all the things I could come up with were minor and not really worth mentioning. The game is really outstanding, but things such as the occasional framerate stutter, lack of tutorial for some game modes and minor plot/gameplay annoyances prevent it from achieving perfection.

Overall the campaign lasts (at an estimate) between 12 and 14 hours, but there is plenty of replay value as you can head back in to find the hidden artefacts, play standard co-op, Arcade, Beast or Horde modes  with mates or head in for some Versus action. You could even try a higher difficulty to test your abilities, or wait until Microsoft releases the promised DLC packs for the game.

Gears of War 3 is epic. There is absolutely no doubt in my mind that the game deserves a spot in the top games of the year so far with its cinematic, enthralling storyline, fun and engaging gameplay and multiplayer modes along with some awesome visuals and sound effects. If you played previous Gears games, you will love the third instalment even more than before, and if you’re a newcomer to the series you can be sure to enjoy frantic and intense action from start to finish.

Sorry for the lack of original screenshots. I'm working on acquiring a capture card for use in future reviews.