I was genuinely excited when I got my Google Music invite. Ever since the service was introduced last year at Google I/O, I’ve been looking forward to Google Music, and Google’s entry into the music business. The digital music industry needed a refresh, and Google was poised to take music to the cloud, a service that no major digital music provider had been able to implement at that point in time. Fast forward one year, and Google is in a very different situation. Amazon has already released a fully functional consumer cloud storage platform, built for music but really compatible with any kind of media. While Amazon’s offering garners generally positive reviews, there are stirrings around the Internet about Apple jumping into the music subscription and cloud storage arenas, and that has rightfully terrified anyone looking to get into either business. Zune Pass has become once again a force to reckon with. It's leading a new push in Zune hardware, now in the guise of WP7 devices, a promising new market for music subscriptions.

In a world that is no longer the vacuum Google hoped it to be, Google Music Beta was released, on a US-only, invitation-only, basis. The first batch of invites was given to I/O attendees, and the next batch (which seemed to be directed at Motorola Xoom users) only started going out this week. I’ve been working with Google Music for the past few days, and before I start the in-depth portion of this review, I’ll put it simply: This is as beta as it gets. Among all the beta products I've used from Google, this one very much deserves the beta tag, and I sincerely hope, for the consumer’s sake, that Google has some tricks up its sleeve before this thing goes truly public. 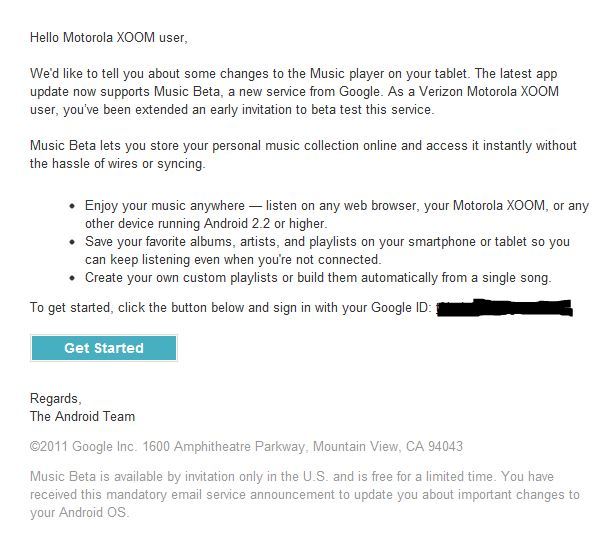 My invitation came via email. Apparently, the one time I used my Google login on a Xoom was enough to grant me the grand title of “Xoom User,” and on that basis I was given access to Google Music. The link brings you to the Google Music website, which prompts you to login and download the Music Manager, the tool that actually uploads your music. Simple enough. I download the installer, it does its job, and it prompts for a login. After providing that, I’m greeted with an error. “Unable to Login. There has been a temporary server error. Please try logging in again." Needless to say, logging in again, didn’t work, and I was stuck. I figured maybe something was wrong with this specific PC, so I went to a different PC to download the installer. Unfortunately, that’s nowhere to be found. After clicking around the Music Player to find any reference to the download, I searched the Help section, which informed me that the download link could be found in the original invitation email. After reading the invitation email a few times to make sure I wasn’t crazy, I determined that, indeed, there was no link to the download in the email. I ended up grabbing the installer from the other PC and dropping on my current PC, but that obviously shouldn’t be necessary. The software doesn’t give you access to the service, so there’s no reason Google shouldn’t have a download link clearly labeled in the web app.

After installing Music Manager on a different PC, I was given the same error message, so I tried to contact Google. Refreshingly, I got a response in a few hours. Given Google’s support track record, I expected to wait at least a day. However, none of their solutions worked.

In the meantime, I could still get on the actual web app. That was never the problem. I just couldn’t upload any music to it. Fortunately, Google gives you an impressive amount of free music to start with. When you first sign up, it asks you what kind of music you would typically listen too, and in the spirit of journalistic integrity, I just selected everything. As soon as I logged in to Google Music, I was greeted with 128 tracks of free music, spanning countless genres and moods. We’ll return to the uploading process later. 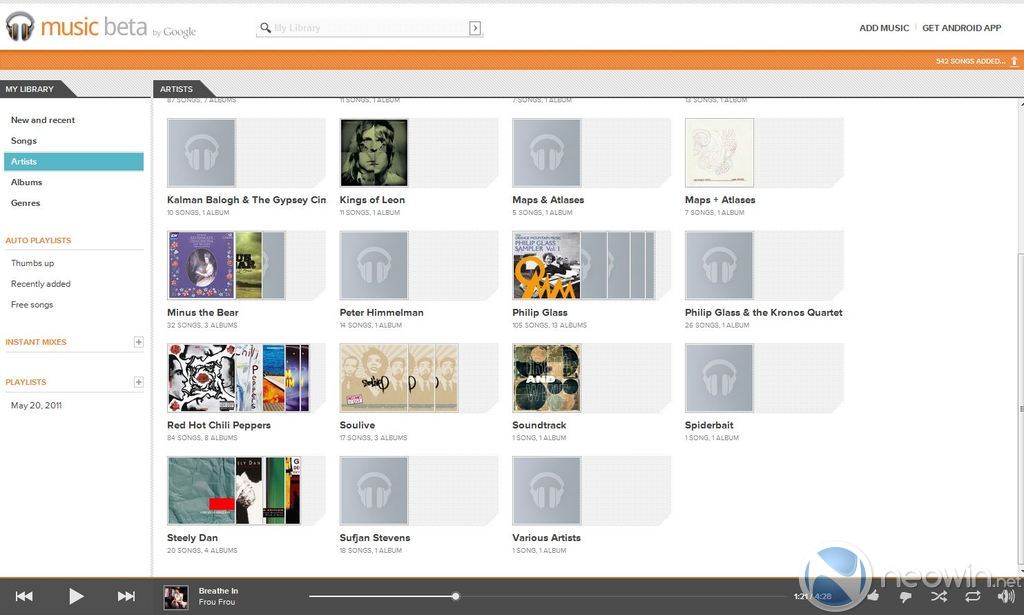 Google did a good job with the overall UI on the web app. It’s different than what you would see in a typical Google App, and it’s got a refreshing and modern look and feel to it. Navigation is simple enough. You have some predetermined organizational views in the left hand side, with the media itself on the right side. There’s an ever present “Now playing” bar at the bottom, so you can browse through other music, while you’re listening. It’s very simple, very streamlined, and I was rarely confused as to where something was. However, one thing I did notice is that there are no right-click context menus for the web app. While not a really big deal, it makes the experience fell more like a web app than a music platform. Actions are done by left-clicking through menus. It takes some getting used to, and it’s not all that bad, but if Google Docs can do it, I’d want Google Music to have the functionality as well.

There isn’t much else to the interface. You can drag music into playlists, and you can select a song to make an “Instant Mix” out of it, which will supposedly find 25 similar tracks and make an ad-hoc playlist for you. I say supposedly because this hasn’t worked for me yet. It just tells me “Couldn’t create instant playlist.” No explanation or anything. However, the mix shows up in the New and Recent view, and when you click on it, it just thinks for a while and then pretends that nothing happened. Very beta. There’s no way to automatically download album art or query a database like Gracenote for ID3 tagging.

If Google was going for pure simplicity, they’ve made it pretty clear. There isn’t much to do here, and that’s both a blessing and a curse. It’s an easy way to get to your music in a pinch, but that’s really all you can do. The next step, and the feature that really was the selling point for Google Music when it was introduced last year, is Android Sync.

The app updates the current integrated Music, and adds Google Music sync functionality. It also makes the application almost unbearably ugly. I don’t know if this is a problem with my phone, or if it’s by design, but it looks like very little time and effort was put into making the mobile app presentable. It’s also slow, at least when you start it up. Performance gets better with time, and this could be a function of the music information being synced at startup, but, as before, it feels very much like beta software. 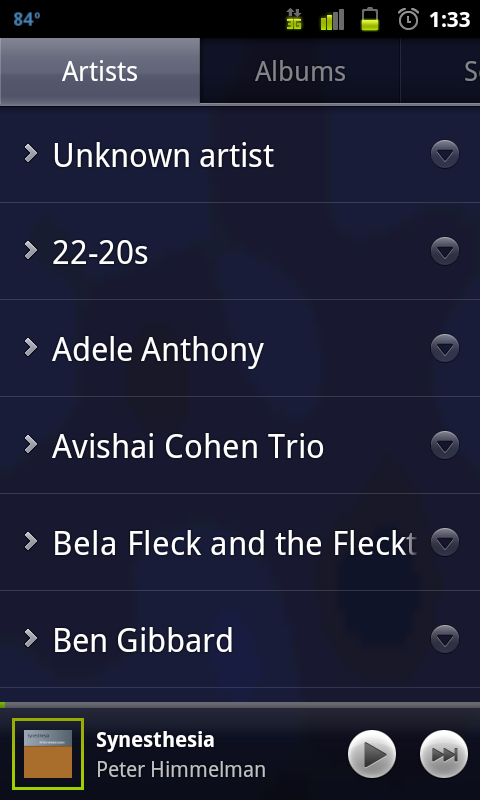 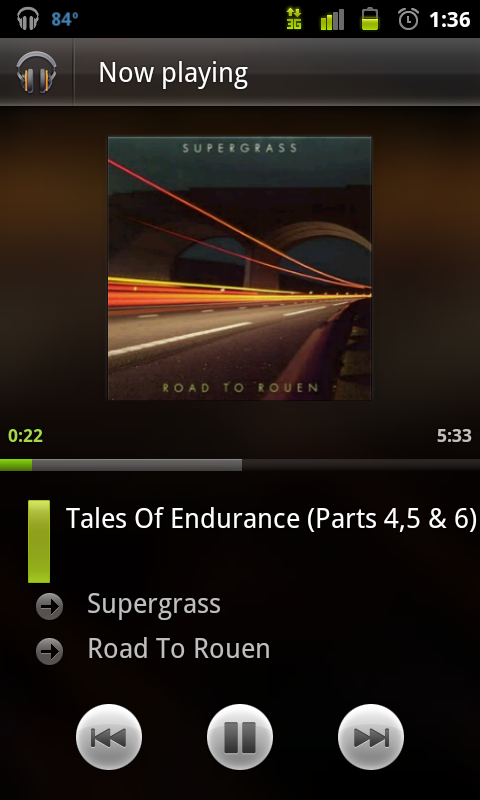 Google Music automatically syncs information about your library to the device, and you can choose to display all content or just offline content. When you play a song from your online collection, the Music app cached it automatically, and it becomes available offline for later listening. This option can be turned off, and you can still stream without the automatic download. Users with not a lot of SD card space left will want to make use of this. 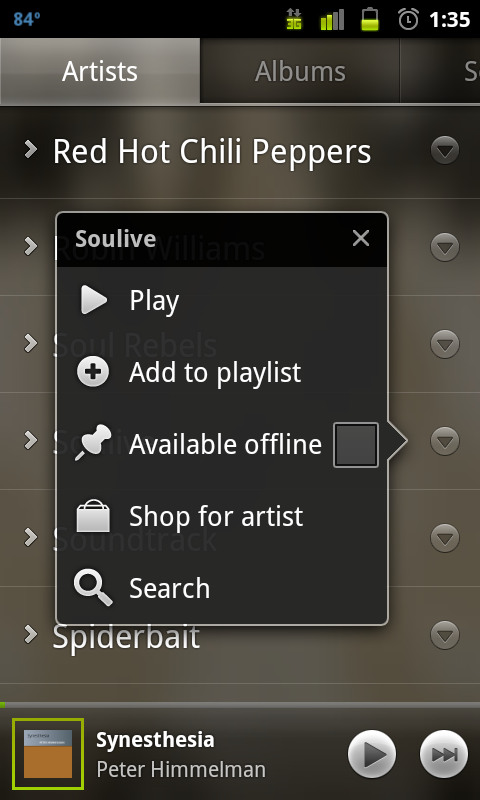 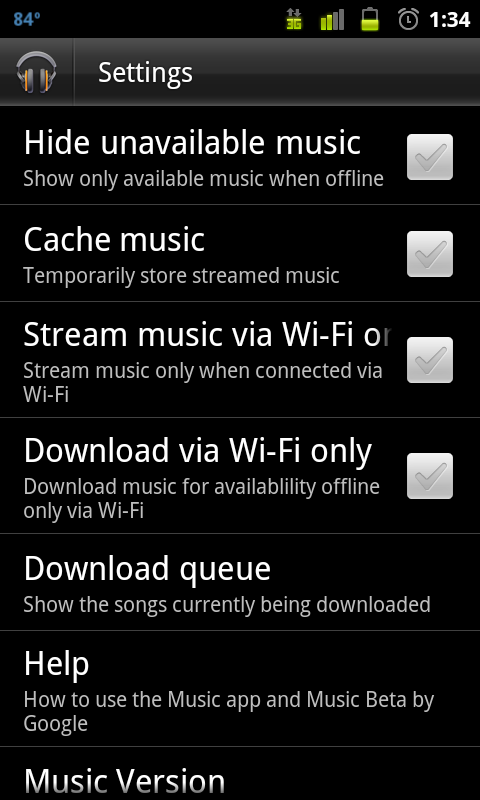 An interesting twist I wasn’t aware of until trying to write this review is that you can’t play music from two devices at once. If I’m listening on my PC, and I try to stream something from my phone at the same time, the PC player gets paused with a message saying that playing music on multiple devices is a big no-no. This takes Google Music basically out of the running for a complicated home media center setup where you could very well have multiple streams for different rooms. And it also takes the idea of a shared music library completely out of the equation. If only one person can listen at a time, it almost defeats the purpose.

Oddly enough, after the web app told me that it couldn’t create an instant mix for any of my songs, a fully populated 25-song instant mix showed up on my Android phone. Odd. 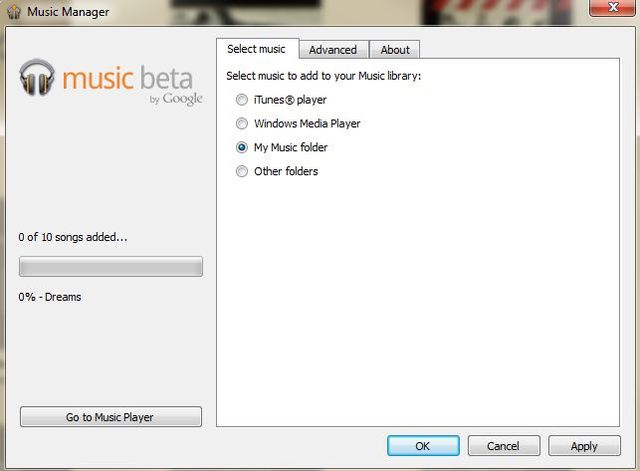 After about 6 hours, the Music Manager decided to finally let me in. I guess it was really a temporary server error, but that doesn’t make me any less concerned about it. The Music Manager doesn’t ask for much. It asks you where your music is stored, scans the location, and starts uploading. Or, at least, that’s how it should go. My folder of around 1000 tracks kept confounding the Music Manager. After 18 tracks, it just decided to stop uploading. I had to restart the software to start again, and even then, it only worked sporadically. I tried giving it smaller portions of music, and that seemed to stop the issues, but that was only temporary. Eventually, once again, I gave up and waited to try again later. The next morning, I started the upload again, and it seemed to work decently. My upload speed isn’t stellar by any means, so I wasn’t expecting much as far as speed goes, but it took almost 5 hours to upload 500 songs. Your mileage may vary. Overall, the experience was frustrating, at best.

I’m honestly not sure what Google was thinking with this. People have tried to tell me “It’s a beta. It’s not supposed to be perfect,” and I understand that. I also understand that Google rushed this out because Amazon had already beaten them to the punch, and they wanted desperately to get this rolled out before Apple decided to crash the party, with its fancy label licenses and juggernaut of a user base. Beta is an excuse for bugs, but not an excuse for a product that simply can’t compete.

Ultimately, that’s the point that will keep me from praising the Google Music platform in its current incarnation. There simply is nothing here that is compelling enough to switch from another platform. For now, you do get 20,000 songs worth of storage free, and that will be attractive to users with very big libraries, but Google was decidedly cryptic when it said the service would be free “for now.” That free storage could very well be fleeting. There’s no integration with a music subscription or purchasing service, it won’t tag your music, and the web app is a very simple affair, both in that it’s streamlined and that it has virtually no features other than being a pretty place to store your music. Add to all that the simple fact that it simply didn’t work for me for much of the time, a subpar mobile app, and Google Music is all of a sudden standing on some very shaky ground.

There is some good here, though. The underlying design behind the mobile sync is rock solid, and is a huge asset for anyone looking to sync large libraries and make their music available on the go. For now, you are getting a large storage area at no cost, and you can use an unlimited number of devices to access your musical assets (only one at a time, though).

If Apple really does manage to get an iTunes cloud storage platform and label-backed subscription plan released in June (or even September), and Google hasn’t improved on their offering, it could be a very short ride for the search company’s musical aspirations. At that point, it will be up to Microsoft and the other already entrenched subscription services to start a storage division and give Apple a run for their money.