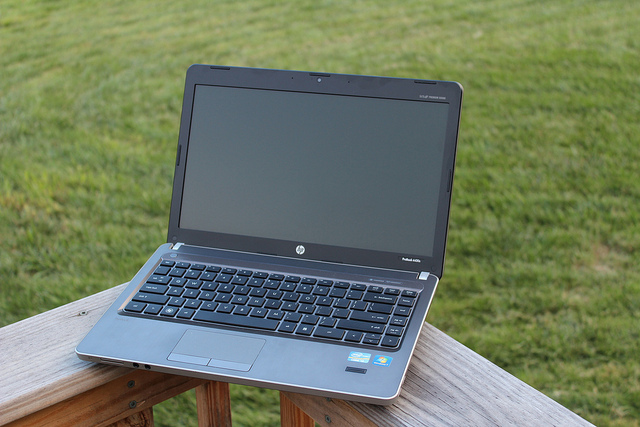 Choosing a laptop can be an overwhelming experience if you don't keep up on the latest and greatest technologies. With new processors coming out all the time, integrated vs. discrete graphics options, and many more features, choosing the right laptop for yourself or your company can be a difficult task.

HP sent Neowin one of its ProBook 4430s models for review. This model replaces the previous generation 4420s series and this particular line of laptop starts at $579. The model that HP sent comes in at $649.00 and for that amount of money you will receive the following machine:

The entire spec sheet can be found here but the key specs are listed above.

This particular unit falls into HP’s ProBook series which denotes that it for the business environment.  Because of that, HP kept the look and feel of the device to a minimalistic approach. You wont find any overzealous colors or unusual materials; HP opted to keep it simple and classy.

The 4430s weighs in at about 4.5 pounds, which gives it a solid feel but at the same time does make it heavy to place on your lap.  The body of the unit has the look of brushed aluminum but is smooth to the touch.

Overall the look is quite attractive. HP made it clear that design was not an afterthought with this product, which you can see by the recessed hinge for the screen. 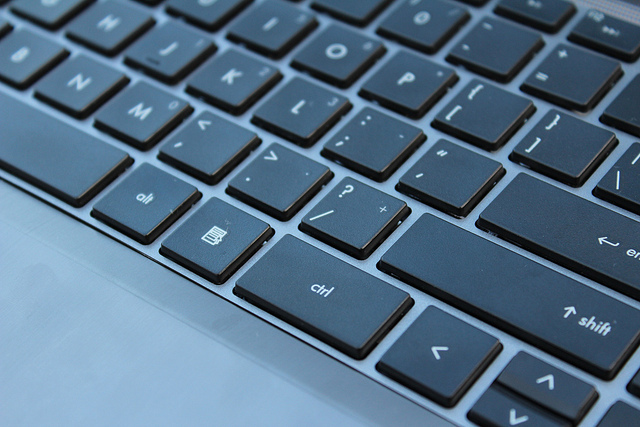 When it comes right down to it, the keyboard is a make or break feature on many laptops and fortunately HP has found a good balance of texture and travel distance on the 4430s. The keys are covered in a material that provides enough traction to keep your fingers firmly planted on the keys but does not feel uncomfortable either. One little note, this keyboard has possibly the largest ctrl key we have seen on a laptop. 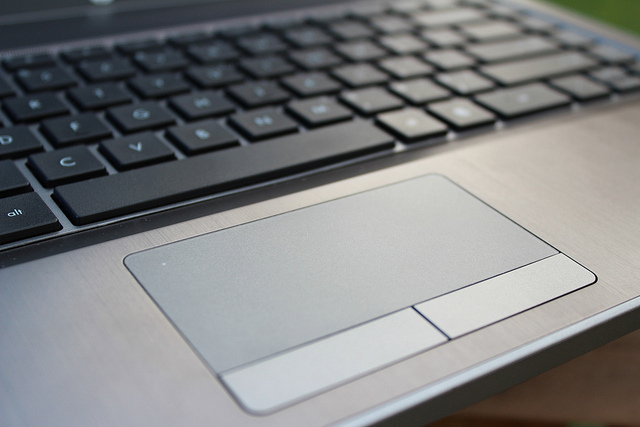 The trackpad on the 4430s is middle of the road. HP said that they listened to customer feedback to make it larger, but it still looks to be about the same size as most competitors on the market. It works as one would expect, but is nothing special.

The two buttons below the trackpad receive high marks for the build and "clickyness." While they are a bit firm, over time they will become second nature. The keys are well planted in the chassis and rank among the top that we have used. 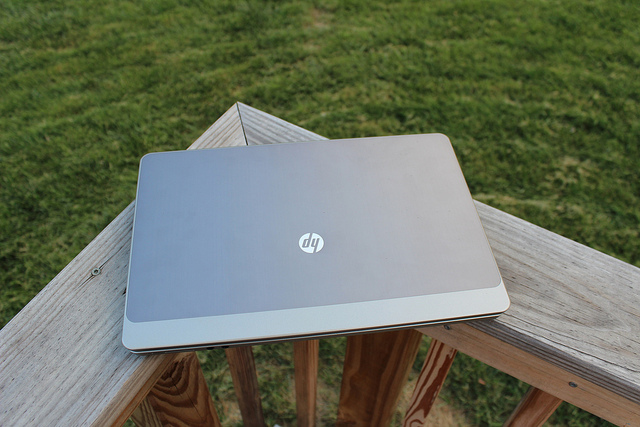 The review unit came with a 6-cell 47 Whr battery that lasted about 4.25 hours of general to heavy use. There is also a 9-cell battery option available for those who need to go longer durations without plugging in. The battery length is adequate for this machine: While you could argue that 4.25 hours isn’t exceptional, for $649.00, we feel it hits the mark for its price point.

One sticking point, and one that is usually denoted by our readers, is that the resolution of the screen is 1366 x 768. While we desire a higher resolution screen, compared it its competitors, the 4430s is on a level playing field. Viewing angles both horizontal and vertical were adequate but they are not extraordinary. The screen is matte and is something that we prefer as using it in a well lit area is done with ease and direct sunlight, while a small barrier, is workable on this laptop.

For being a Core i3-2310M, the machine had few issues churning out Excel, Word, Outlook, and YouTube videos. Clearly a lower spec machine, this would not be ideal for heaving Photoshop use or video editing. But for your simple daily tasks, there are no issues. 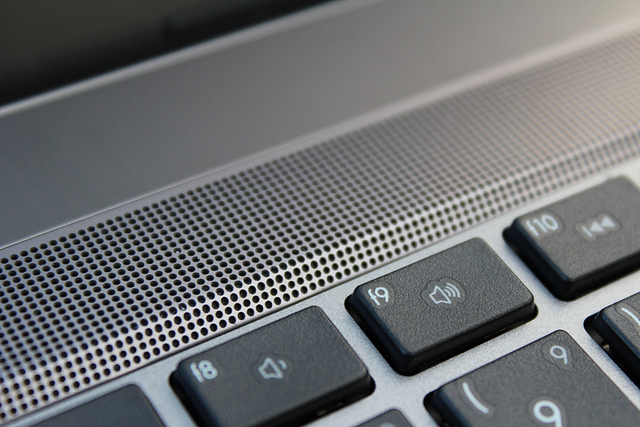 The 4430s is neither a star nor a last place finisher. The audio is acceptable for a laptop as its mids are respectable but the highs have a tin sound to them. HP added in a few extras to enhance the audio for conference calls but at the end of the day, the audio works, and wouldn’t present any barriers to use. 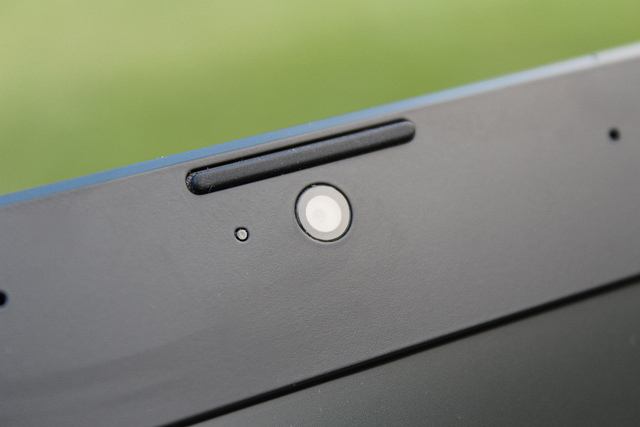 Like most other machines on the market, this one comes with a webcam. Like many others, it gets the job done but falls short on color reproduction. For Skype calls and the like, it will get the job done without issue. 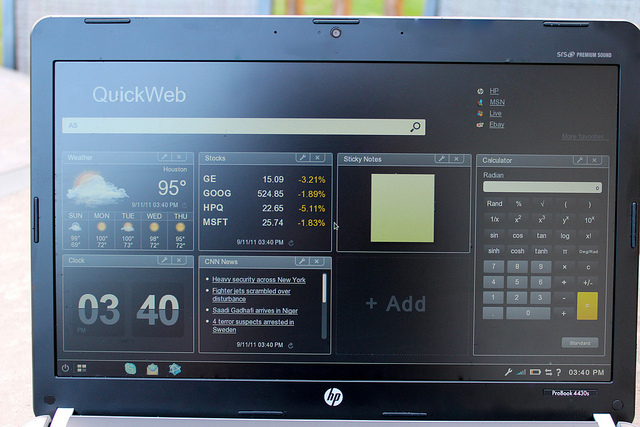 A nice little addition that HP includes is its “QuickWeb” feature. On the keyboard is a button that allows you to boot to an alternative Linux OS that gives you quick access to the web and to your email. The browser is built on Mozilla platform and is a nice addition to the laptop. You may not use this feature every day, but when you need to quickly access the web and little else, this feature fills that niche rather well. 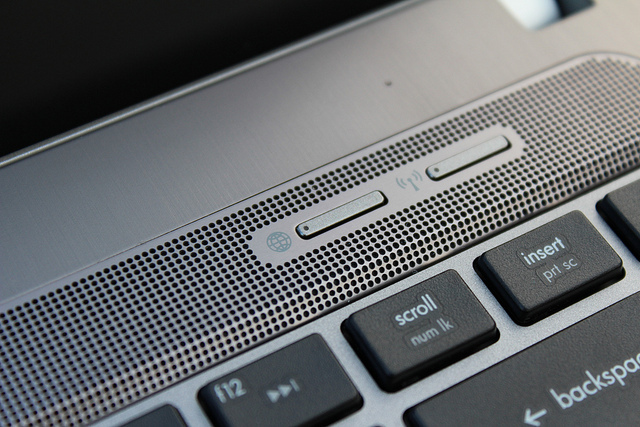 Heat is always an issue with laptops. The 4430s does get a bit warm under moderate usage and the fans are a bit louder than we would prefer. We have certainly heard louder fans in the past, so don't think it sounds like a jet engine when running, but they are not all that quiet either.

The hard drive in this unit is 320 GB, which may be small for some who use this laptop. Keep in mind that it is typically easy to upgrade your hard drive, even in a laptop.

HP also includes sensors to shut the hard drive off if dropped. There are actually two modes, one if the laptop is open and one for when the lid is closed. If you have ever been using a laptop with the lid open and moved locations to only have the hard drive shutdown, this setting should help avoid such scenarios.

The HP 4430s is a beautiful machine that has the build quality to back up the look and feel of the device. HP did a great job at making its lower end machines not feel like second class citizens.

There are a few areas of improvement, notably the resolution, but overall, for the price of $649.00, this an excellent machine for business or even personal use.