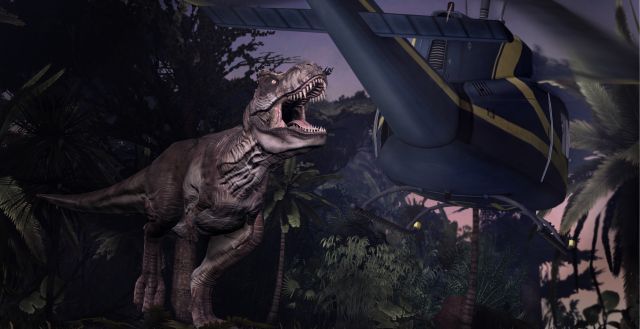 The late novelist Michael Crichton gave us the original Jurassic Park novel back in 1990 but for most of us, it's the movie version directed by Steven Spielberg in 1993 that captured our pop culture minds. The basic idea of ancient and extinct dinosaurs brought back to the modern world via science was combined with the most advanced CGI visual effects ever attempted in a feature film at the time to help create the creatures. The result was a movie that was pure popcorn fun and remains highly entertaining today.

There have been numerous attempts to adapt and add onto the Jurassic Park mythology via video and PC games over the years. Perhaps the most infamous was Jurassic Park: Trespasser, a 1998 PC game that had some direct involvement by Spielberg. The game attempted to create a unique first person experience centered on a woman who crash lands onto the dinosaurs' island. In the end the game failed miserably on almost all counts and is frequently mentioned by members of the media as one of the worst games ever made.

At first, the storyline for Telltale's game runs parallel to the events of the film as we follow a new set of characters on the Pacific island of Isla Sorna. One is a park veterinarian who happens to have his teenage daughter with him (it's never explained why this guy could bring his daughter to a supposed secret animal preserve-wildlife park, but hey, maybe John Hammond authorized it). Another character is a mysterious woman who has been hired by the same company that convinced Dennis Nedry to steal the dinosaur embryos off the island. Early on she discovers Nedry's Barbasol shaving cream can where he hid the stolen embryos buried in the mud (she also discovers Nedry but that's another topic). That Barbasol can turns out to be the central item in the entire game.

After the first of four "episodes" (unlike other Telltale adventure games the entire "season" is available from start to finish in one game) the storyline tells what happened on the island after the survivors that are seen in the the movie are rescued by helicopter. It's in the second episode that we meet the rest of the game's main characters. There's a three man mercenary team hired to evacuate the remaining survivors off the island and a dinosaur geneticist who might have another agenda up her sleeve. The storyline is actually quite involving as you get to know the characters: most of them are not what they seem to be at first glance, which is a good thing as it kept me interested in their plight. The voice acting for these survivors is also solid.

Unfortunately, if players were expecting a pure action game in this latest Jurassic Park offering they will be greatly disappointed. The game could have easily been made as a Flash-based web browser title. There is so little real interaction that this title borders on watching a movie with a few interactive elements. Most of the action involving the various dinosaurs on the island involve the player clicking on the arrow buttons on the PC keyboard in time with icons on screen in order to run away from or fight the dinosaurs (mostly run away). There's very little challenge in these sequences. 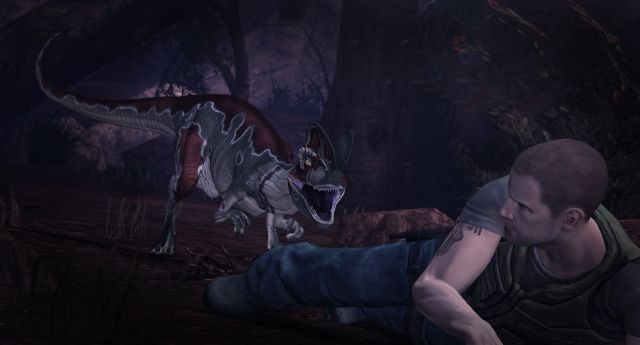 There are also some puzzle elements to Jurassic Park: The Game that involve trying to solve problems such as powering up a wrecked rollercoaster (yes, apparently Hammond planned to have an amusement park in addition to the wildlife park on the island) or figuring out how to get an elevator working. But there are sections in the game where the player has little or no interaction at all. These mostly involve dialog choices given to you by the game in order to address characters in different ways.

Overall, most gamers should solve the entire four episode "season" in about four or five hours or so: yep, it's pretty short. On top of that the game offers little in replay value. You can get a gold status symbol if you complete a section of the game without making any mistakes but that isn't enough to go back and replay a section.

Visually the game is a mixed bag. It has some flat looking lighting and texture models, but the character models are well done for the most part and the dinosaurs, including some new ones that haven't been seen in any of the movies, look appropriate and scary.

It's clear that Telltale designed this game not for the hardcore gamer but for the very casual fans of the movie. It's likely that they will enjoy the storyline and voice acting, but we like to interact with characters, creatures, and the environment in the games we admire the most and that is just not present here.

We are still waiting for a perfect Jurassic Park game where we are in first person and exploring an open world island filed with genetically resurrected dinosaurs. Instead we have this game, which is clearly dumbed down for the people who liked the movies but have never seriously played games. Only gamers who are die hard Jurassic Park movie fans should get this game and even some of them might come away unsatisfied.

This review is based on a download code given by Telltale Games for the PC version.