If you love pinball, then Zen Studios’ Pinball FX2 is the game you have to get. The base framework is free and the company releases various tables at reasonable prices (less than 240 MS points). Their latest package of tables is called Marvel Pinball: Vengeance and Virtue and contains four individual super hero themed tables for 800 MS points (or $10 on PSN).

While the previous Marvel four-pack contained tables for well-known icons (Spider-Man, Wolverine, Iron Man, and Blade), this release focuses on some of the lesser known heroes. While this fact does not detract from the games themselves, I did have to scratch my head and ask, “Who?” when I saw the table for Moon Knight. Although I enjoy playing pinball, I’m hardly an expert at it. In order to review four individual games at once, I decided to play through each table three times and record my impressions.

The first table I tried was from my favorite super hero group, the X-Men. I was very excited about this one as it pits Magneto against Charles Xavier and includes a big cast of characters fighting it out on the table. Missions include attacking the Blob, freeing Jean Gray with the help of Cyclops, defending Charles Xavier from a Magneto attack, and helping Ice Man repair a bridge that Magneto destroyed. This last mission is one of the more interesting ones I’ve played on any pinball table because Magneto literally rips apart one of the bridges that the ball can travel on and fixing it requires shooting a specific ramp three times so that it’s rebuilt in ice. Shooting the wrong ramp causes the ball to shatter the incomplete ice bridge, forcing you to start over, which is a nice touch. 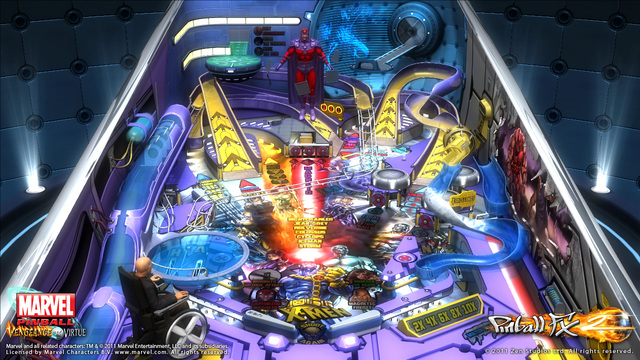 I really wanted to love this table, but it’s a bit of a mixed bag. The graphics are amazing and the introduction of Magneto when you first start is great. The missions are wonderful, but it’s an extremely difficult table to get the hang of. One of the biggest issues I had was the fact that it’s hard to see the upper right and left flippers and the ball travels very fast so by the time you remember the flippers up there, it’s too late. In addition, in my first two games, I drained the ball down the side five out of six times, making it a frustrating experience. I also couldn’t figure out a couple of the missions: For example, in the fight against the Blob it said to shoot the flashing ramp but I didn’t see any flashing arrows to aim for.

With practice this could be a great table, but it’s definitely not very beginner-friendly. My high score was 32M.

The next table I tried was that of the superhero… Moon Knight? From what I can tell, he was Marvel’s answer to Batman and wasn’t all that big of a sales force. That begs the question: Why did Zen Studios decide to make a table with him? Surprisingly though, this turned out to by my favorite table in the pack teaching us that you shouldn’t judge a book by its cover. 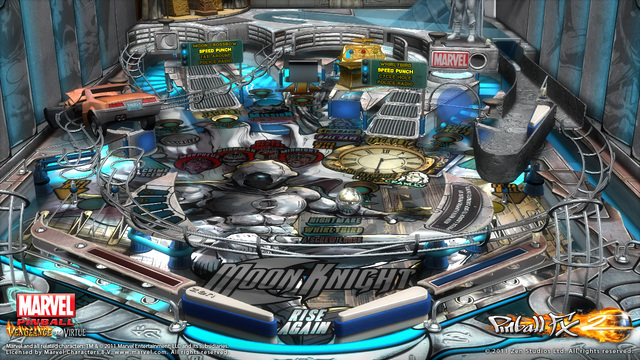 The first thing you’ll notice is the cool comic-book like intro when you start the game. Unlike others that initially pan across the table, this one shows Moon Knight’s ship flying through space. It’s a nice touch, although you’ll probably skip it after seeing it the first few times.

Like other Marvel tables, missions consist of attacking the Moon Knight’s enemies, usually by hitting a specific ramp or target on the table. One nice twist (that is also present in the Thor table) is that during battles, you reduce your opponent’s health by hitting the flashing ramps and you reduce your own health by hitting the non-flashing ramps. This gives the missions more strategy since you have to hit more flashing ramps before the non-flashing ones and is an interesting twist I haven’t seen in other tables. There was also a mini-game where you use the flipper buttons to punch and block a digital opponent but I found this part rather dull and lacking any substance

Overall though, the fast playfield, the different missions, and the quippy lines by the main character make this our favorite table of the bunch. Our high score was 26M.

This table had the most interesting looking playfield. In the center is a ramp, blocked by a motorcycle wheel. A devil is standing to the left of that. There’s a big shotgun along the left edge of the table and a big motorcycle in the upper right. The table just looks cool! 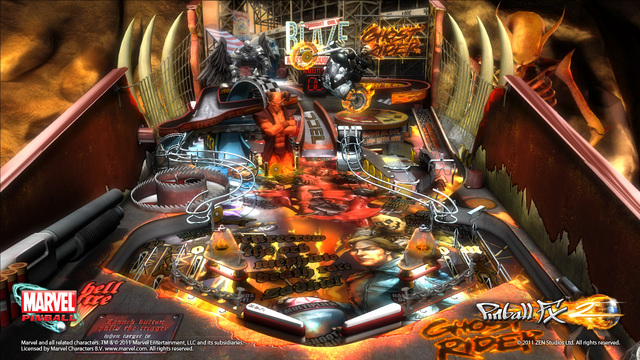 Unfortunately, the looks of the table didn’t translate into a great gaming experience. Overall the table’s layout is very confusing and the ball is hidden from view a lot of times. There are many missions, but it’s usually not very clear where you’re supposed to be aiming and I found myself just shooting the ball down the middle or at the Devil for lack of anything else to aim at. Adding to the confusion, at one point the shotgun on the left started panning to the right and left but I couldn’t figure out what I was supposed to be aiming at – or whether it was simply an animation of some sort.

While the X-Men table seems difficult and could be a great table, this one left us feeling like it was the worst of the bunch and not that interesting. Our high score was 11.6M.

The ancient Norse god, fighting against his adopted brother, Loki, is a fun table and our second favorite of the lot behind Moon Knight. The gameplay is extremely fast – the ball flies around the table at high speeds many times – but you still always feel like you’re in control of the action. 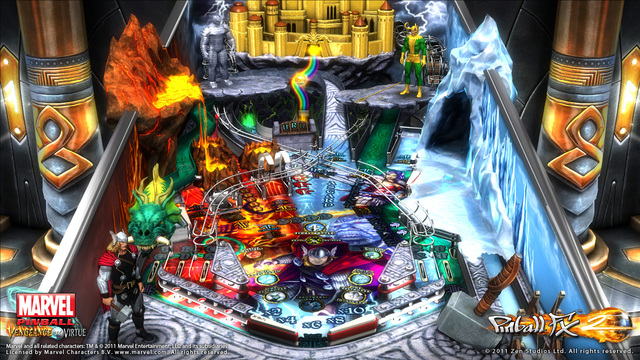 Getting missions is relatively straight forward – simply spell “uru” (the fictional metal of Asgard) by hitting the middle target and the Rainbow Bridge will open up ready to take your ball up where you select a mission.

Similar to Moon Knight, some of the missions have you hit certain ramps to deal a blow to Loki and the other ramps deal a blow to Thor. Get Loki’s health down to zero before Thor’s and you win. That said, overall the missions are much more difficult to complete in Thor than they are in Moon Knight, but again it’s challenging in a good way and not due to confusion of what you’re supposed to be dong.

Overall the table was extremely fun, but also fairly difficult. Our high score after three plays was only 9.1M.

So is this Marvel four-pack worth your hard earned money? Overall, it definitely is. In essence you’re paying $2.50 per game and they all have some interesting elements to them. Three out of four of the tables are extremely fun, and while Ghost Rider didn’t personally appeal to us, like we said we’re not exactly pinball experts so maybe it was created for more hard-core players.

That said, for new players who haven’t played any of Zen Studios’ Pinball games, we’d highly recommend purchasing the original Marvel pack as we found those slightly more entertaining. The Sorcerer’s Lair table that we reviewed earlier is also a great recommendation – and is cheaper for newcomers since it only contains one table.

Fans of Pinball FX2 or the Marvel universe will definitely enjoy this new addition to the fleet and we can’t wait to see more tables from the company.