Zen Studios has been creating many different tables recently, and most of them have been licensed to some pretty big hits. From Fox's various animated series, to many different Marvel titles, there's been plenty to keep everyone happy.

April 26th is being hailed as "Alien Day," inspired by planet LV-426 from the original Alien movie, so to help celebrate, Zen Studios is releasing three tables that are based on the Alien universe. The first, titled Aliens Pinball, has you work with Ripley and the Colonial Marines to fight the Aliens on LV-426. The second, titled Alien vs. Predator, puts you in the role of a young Yautja (Predator) warrior. The last table is based on the video game Alien: Isolation, where you're playing Amanda Ripley, taking on a deadly Alien threat on the Sevastopol Space Station. All three tables have some similarities and many differences.

People usually save the best for last, but in this case, the machines seem to take the opposite approach as this table is perfect is nearly every way. 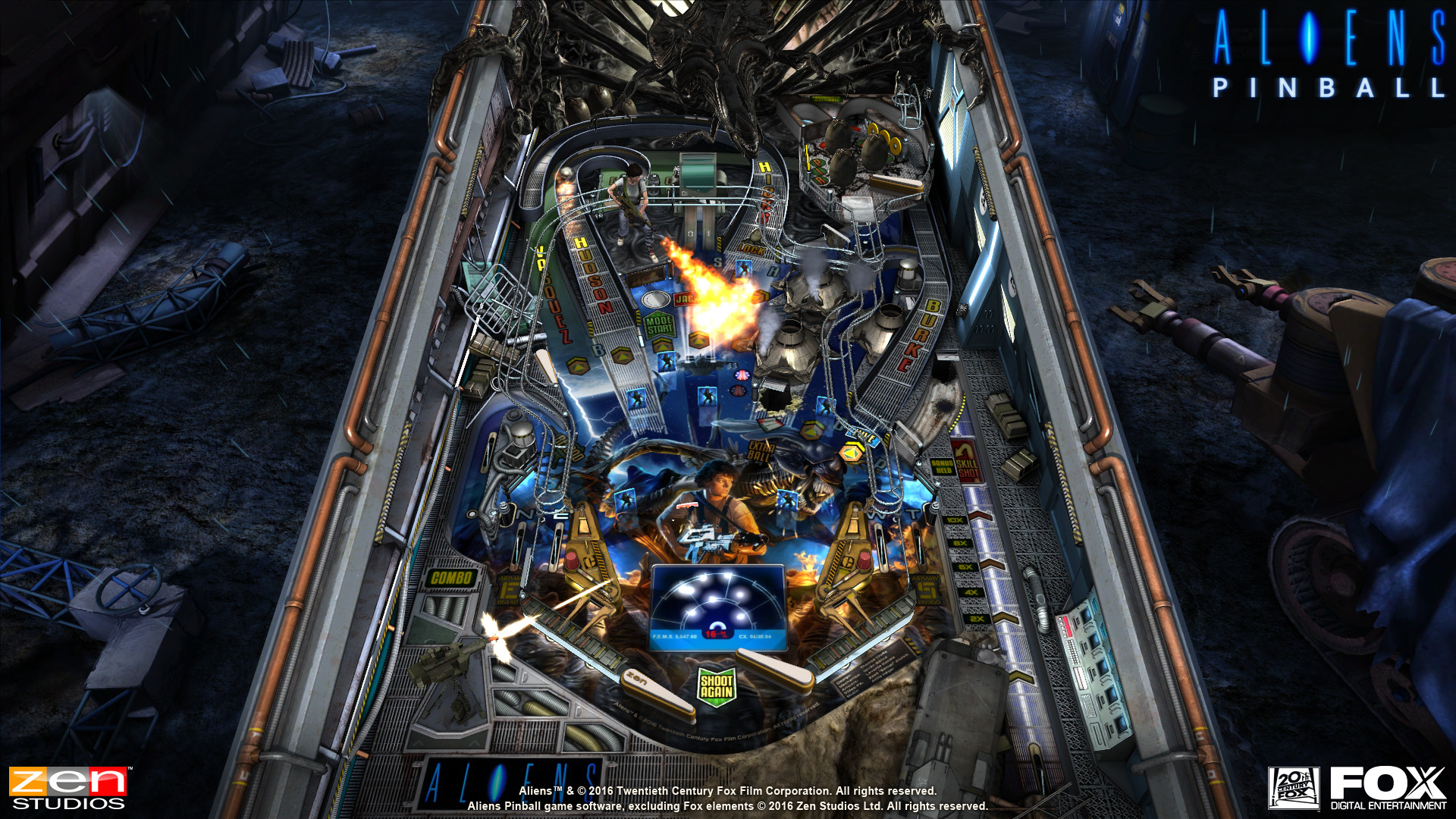 You're greeted with a clip from the movie Aliens of Ellen Ripley talking to Burke which sets the stage for your battle with the aliens:

Just tell me one thing, Burke. You're going out there to destroy them, right? Not to study. Not to bring back. But to wipe them out.

The first thing you'll notice when playing this table is how atmospheric it is. Like with the movie franchise, there are periods of quiet while you're sneaking around, staying away from the alien and collecting supplies. When you start a mode or a mission, the creepy factor disappears and you're met with a burst of adrenalin as the music, lights, and sounds pulse all around you. In the quiet periods, it felt a lot like playing the original Dead Space game, and that's hard to pull off with a pinball machine.

There are six total missions, and as you finish each mission, a new letter in Aliens lights up in the lower-left hand corner. Missions range from simply hitting a few ramps, to having to light your ball on fire and hit a specific target with it. Hitting the ramps a certain number of times also helps with the missions by reducing the power of the creatures or by increasing the damage or lowering the reload time of your gun but in my few games, I didn't notice much of a difference in the battles, probably because I was too focused on stopping the creatures from getting to my flippers.

Throughout the game you'll hear clips from the Aliens movie, but they're not very repetitive like some tables can be and never felt "in the way." Frequently they help you determine what your next step is as well, which is a nice touch. 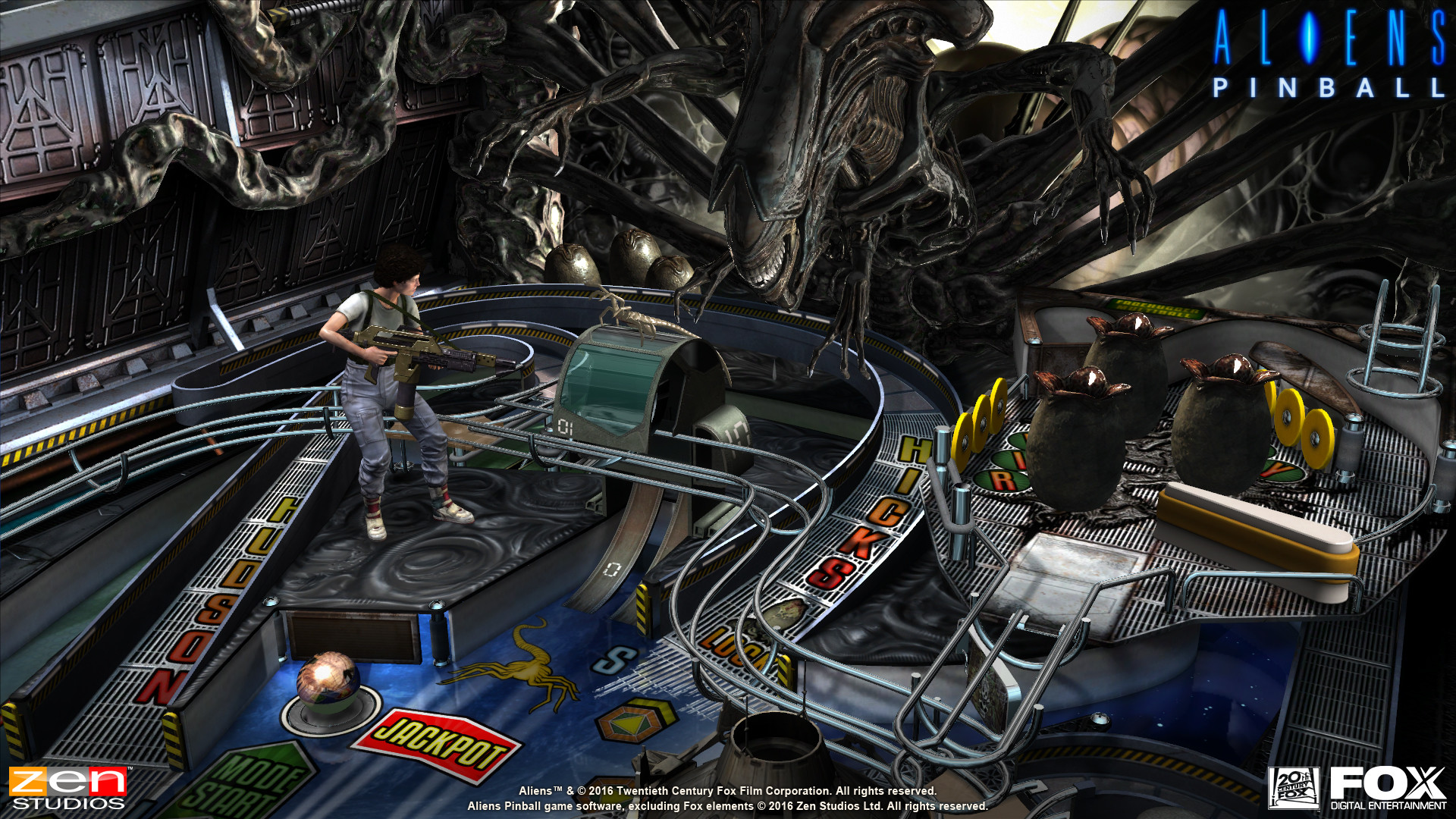 It's hard to explain why the table is so great, aside from saying that all of the components just fit together and work in a way that most tables don't. I had a friend play the table and, without any prompting, she also said that this was one of the best tables she's played. It's worth the price of admission on its own. And the best part, which everyone who has watched the movie knew had to be in the game, is that when the game's over, Bill Paxton (the voice of Hudson) exclaims:

There are a few negatives to the table, but they're extremely minor. The first is that when the game starts, you're given the choice of whether missions are presented sequentially or whether the player gets to choose the order. During all of my tests, I always played in order, but it's obvious that some missions score more points than others, so getting a higher score may be possible by following a different order.

The other minor negative is that the difficulty is much lower than some other tables because you only need to activate a mission, not actually complete it, to get to the next mission. This makes the game much more accessible at the cost of a lower challenge for experienced gamers.

Despite these minor drawbacks, I haven't had this much fun with a table in a long time. Everything works together and is a great example of the whole being greater than the sum of its parts. If reviewed separately, without question this table would receive a 10 out of 10.

The second table on the list is Alien vs. Predator, based on the movie of the same name. Although I've never seen the movie, the concept is pretty simple: Aliens and Predators fight each other. 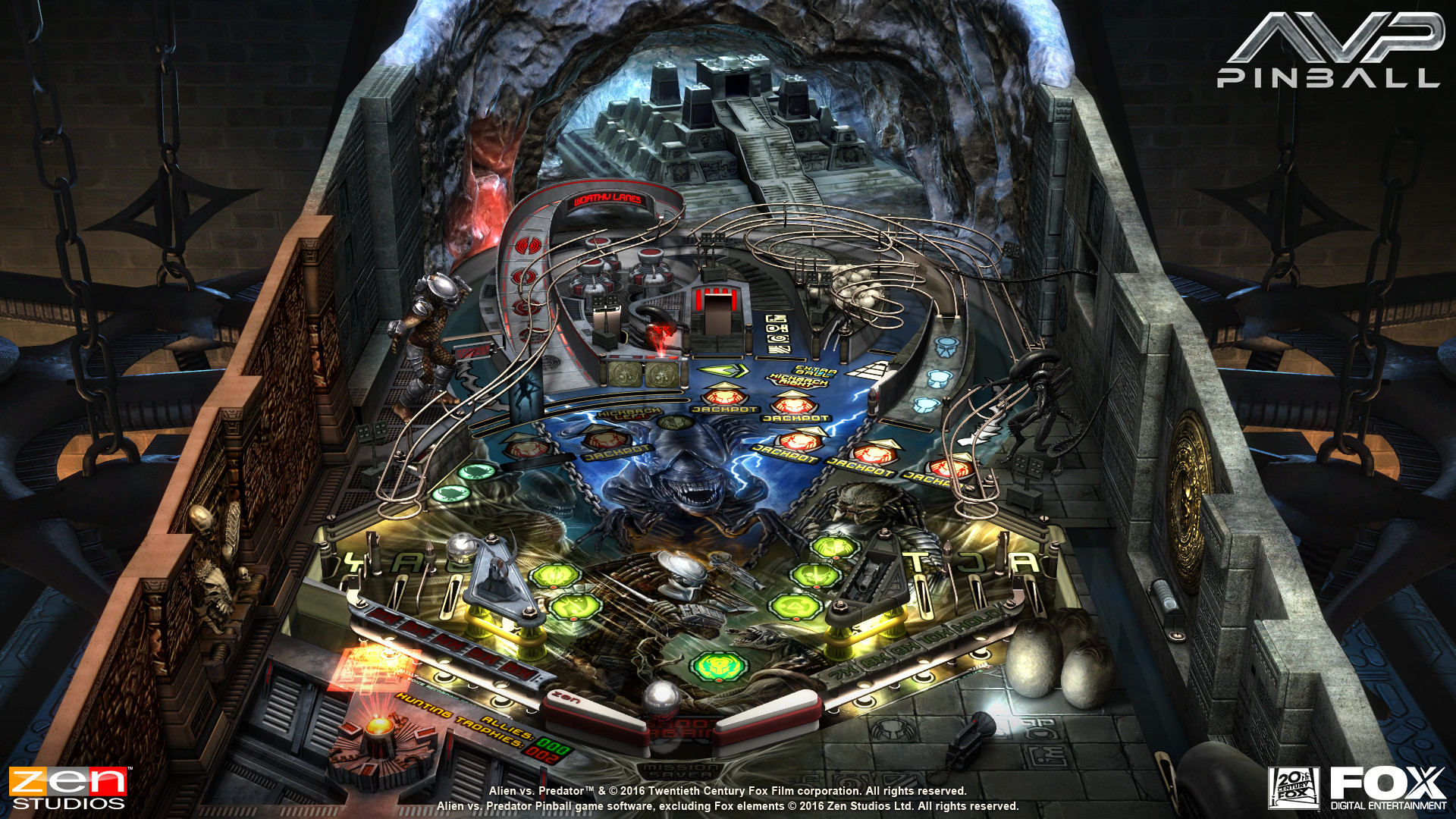 As with the first table, this one is also very atmospheric as your Predator hunts down the Aliens on the table, urged on my the people who apparently consider you their "friend." While most of the missions were pretty straight forward, one of them was cool in that you activate your Predator mode and see the world with thermographic vision, making your targets big heat sources to aim for. It fit in with the Predator world extremely well and was a lot of fun tracking both the Aliens as well as various human shaped figures on the table. Another interesting mission, Vertigo, actually flips the entire table upside down.

Most of the missions on this table have timers, but unlike traditional tables, when the timer expires you have a couple of seconds to hit a flashing ramp to reset it, giving you more time to complete the mission. It's an interesting game mechanic and helps make the game easier than many others which may be a positive or a negative depending on the player's opinion. 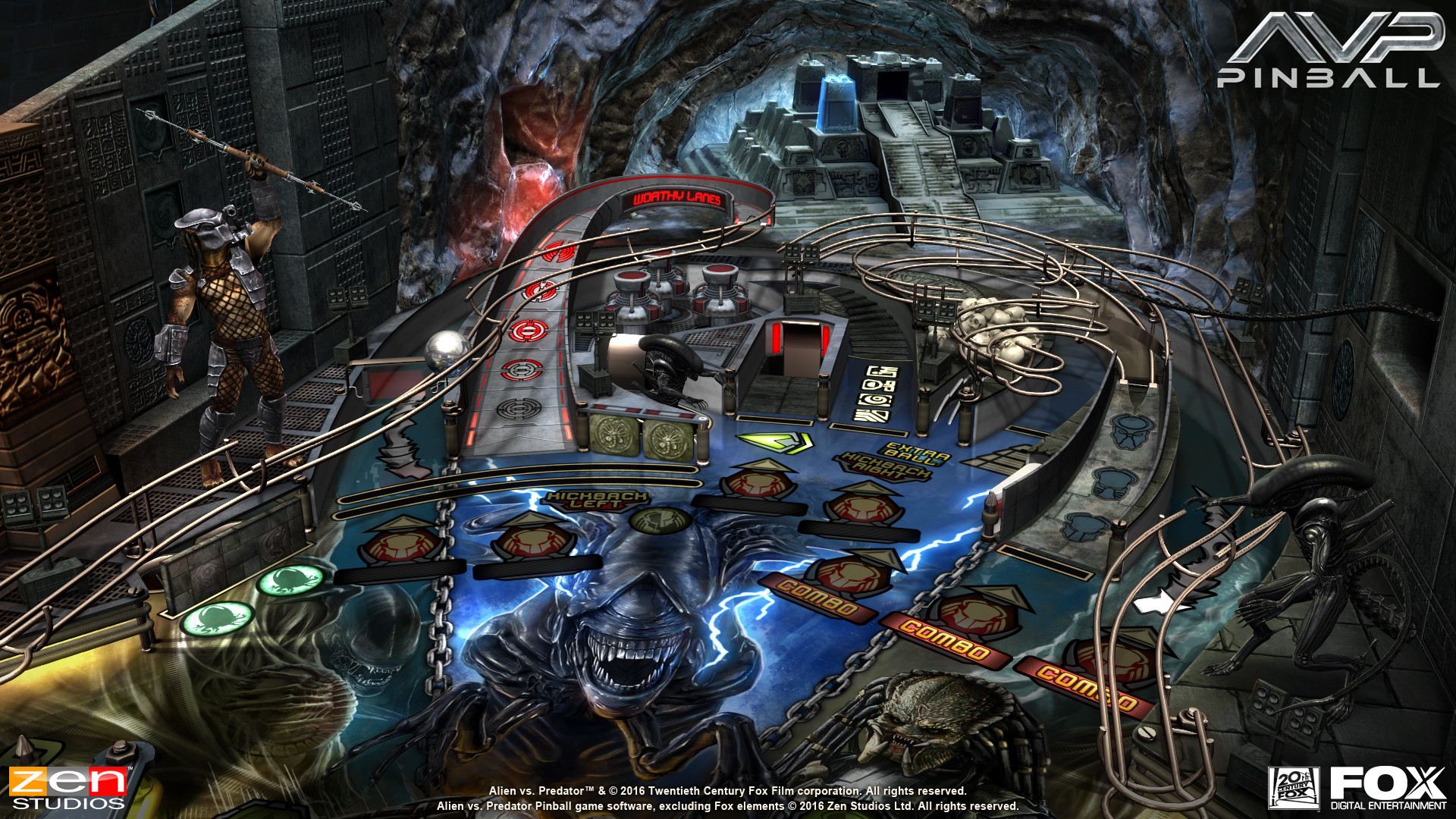 The voicework in this game is also very good, although I'm not sure if it's directly taken from the movie since some comments, such as, "He's aiming for the targets now," seem to be made for the game.

Some of the minigames are fairly weak. When you unlock the pyramid at the top of the table, for example, you're presented with four different patterns in the center, with four different patterns on towers surrounding the main structure. Using the flippers and the plunger, your job is to twist the towers so that they match the main building. There's no timer, and doing this quickly only results in a score bonus. Overall, the game feels completely out of place with the rest of the table and doesn't present much of a challenge either.

If reviewing this table individually, I'd give it an 8 out of 10.

The weakest of the bunch, Alien: Isolation is based on the 2014 video game of the same name. I wasn't familiar with the title, but the table looks really good. 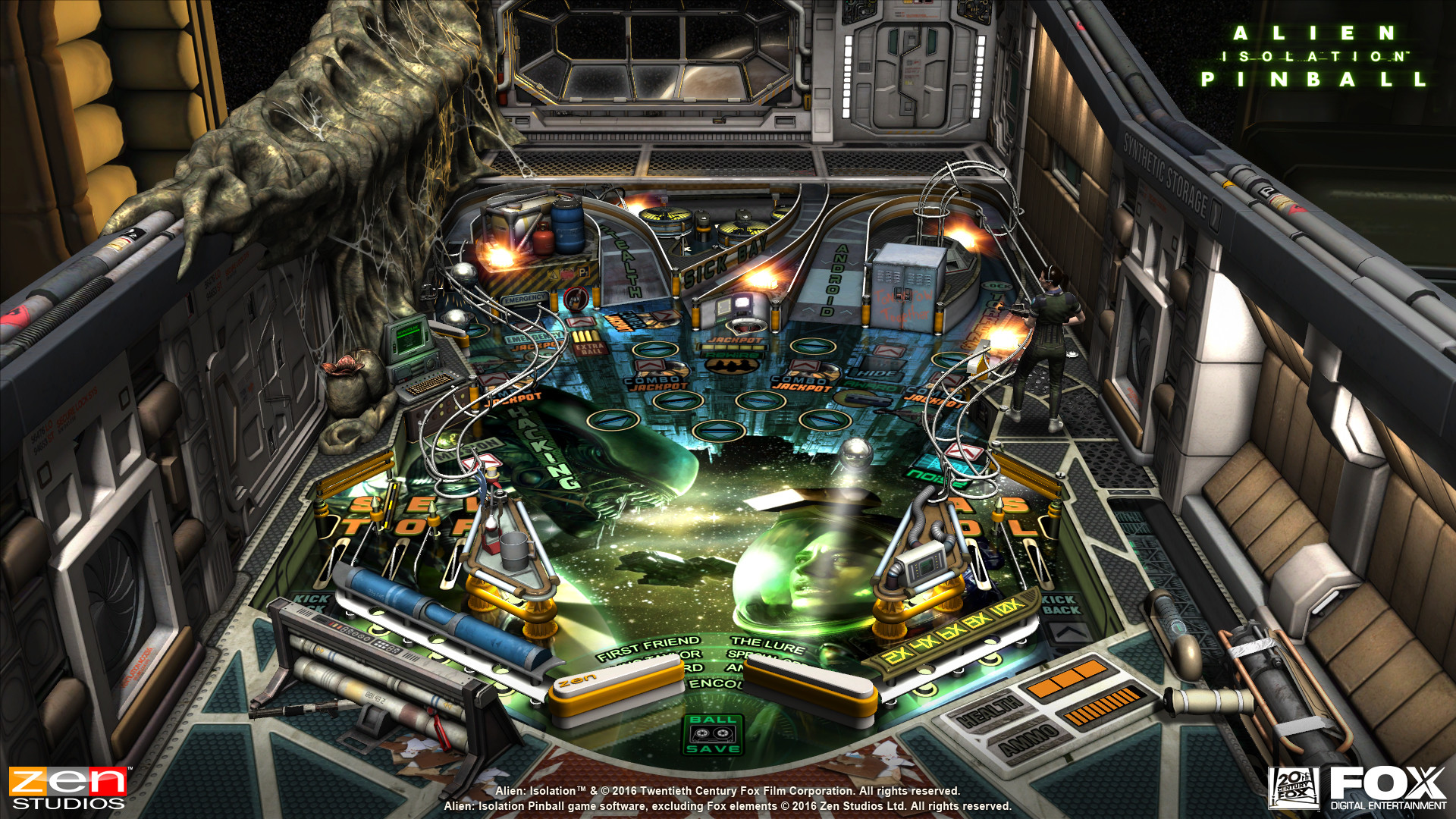 The game has several different modes. In one, you're sneaking around and the Alien is unaware of your presence. In another, you're being hunted, and in another you're in battle with the creature. I wasn't exactly clear what mode I was in all the time, although the voices usually gave you a good idea of what to do.

Speaking of voices, the voiceover work on this table is also good although, unlike the previous two tables, some points became a little repetitious. In addition, one of the actors has an English accent, and the way he says "depot" made me roll my eyes, although this is clearly just a personal issue.

What makes this table unique is the concept of health and ammo, displayed in the lower-right hand corner of the table. When fighting the Alien, your health is reduced and while it will never cause you to lose the game, it does negatively impact your score. The ammo, on the other hand, is used to shoot both creatures as well as security guards. You can do "stealth take downs" by hitting the targets from above, and gunshots ring out when you hit the targets head on. When you start running low on ammo, you need to aim for the reload target in the upper-left corner of the screen. I rarely found myself running out of bullets, but it was a nice mechanic nonetheless. 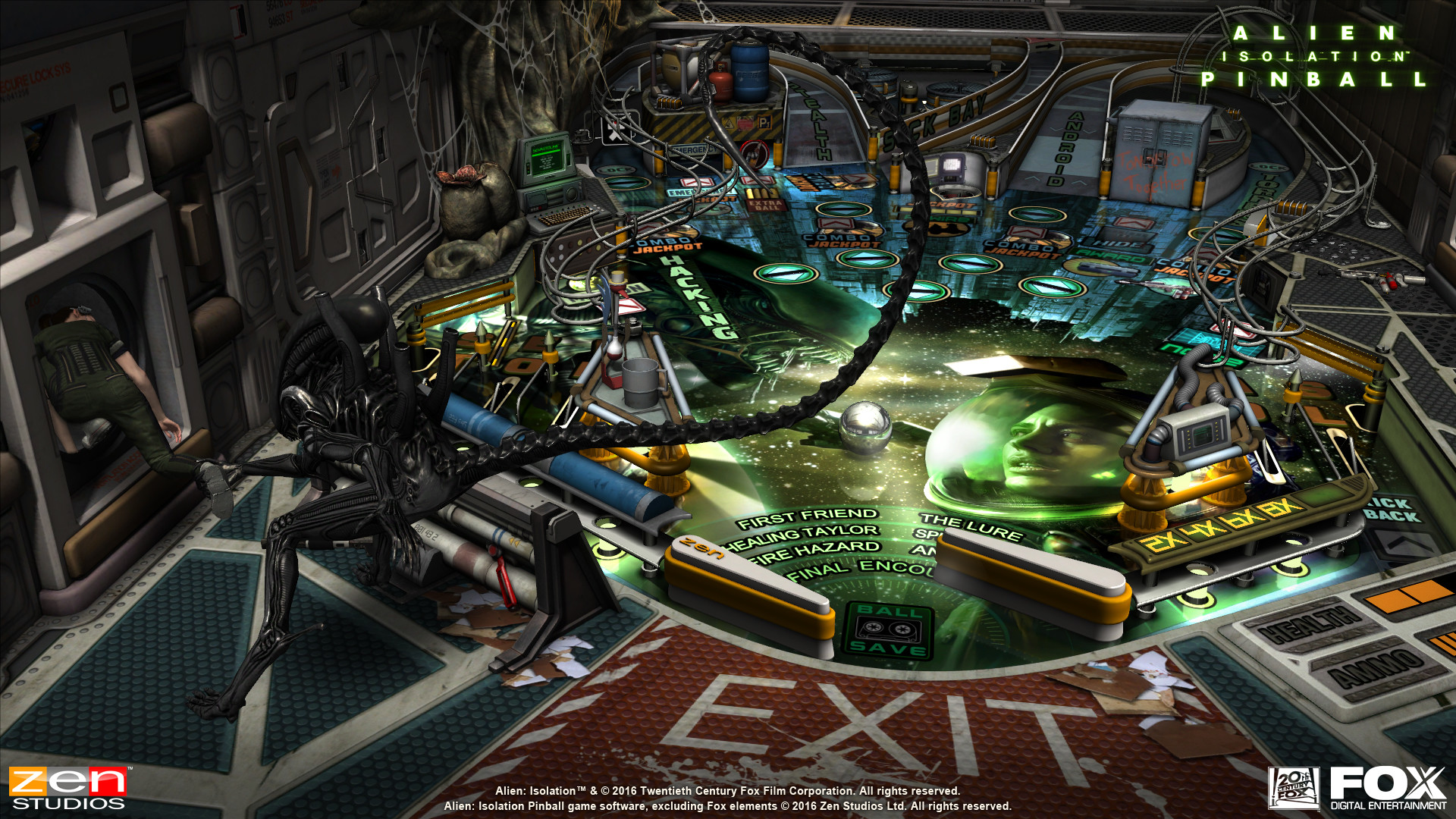 Other than that, the game felt like a typical run-of-the mill table. That's not bad by any stretch of the imagination, but when compared to the previous two tables, I felt a little uninspired. If on its own, this table would receive a 7 out of 10.

It's clear that although all three tables are fun to play, the crown jewel of the pack is the original Aliens Pinball table, and is close to a perfect table in general. If I was providing individual scores for each table, I'd give this one a perfect 10 without hesitation, even with the minor quibbles about difficulty and mission selection. The other two tables are still fun, and would receive strong scores on their own: Alien vs. Predator is a very solid 8, while Alien: Isolation is a still respectable 7 out of 10. Combining these three scores gives us an 8.3 out of 10, which I rounded down to an 8.

The tables try to strike a difficultly balance to be accessible enough for casual players but strong enough for Pinball Wizards and it mostly hits the mark. While progression through most missions doesn't require successfully completing the mission, there are other pieces put in that add to the difficulty, such as being able to deactivate an already lit side light. That said, this pack of tables definitely skews more towards the casual player.

For $9.99, it's definitely worth a purchase by anyone who is a pinball fan or those who like the Alien franchise. The games are a great combination of action and atmosphere and are just plain fun to play. So on Alien Day, April 26th, go out to your gaming marketplace of choice and buy it: You won't be disappointed.

UPDATE: Interested in entering to win the table yourself? Check out our Xbox One giveaway post and you could be a winner!

UPDATE2: The Xbox One giveaway is over, but we're now giving away codes for Windows 10! Check out the information here and good luck!