Zen studios is well known for their excellent quality pinball games, and I've written and reviewed many of them in the past. What many people may not be aware of is the fact that the studio releases other types of games as well. One of them, CastleStorm, has been a popular game on other platforms for over a year, but has made its way to the Xbox One and PS4 this week. For those who are unaware (as I was), CastleStorm is a mash-up of games, including real-time strategy (RTS), action, strategy, and even throws in some castle building for fun.

I had seen the game for the Xbox 360 in the past, but the screenshots just never grabbed my attention. When Zen Studios asked if I'd be interested in looking over the game for the Xbox One, I figured I'd try it out, but didn't expect to like it all that much because the previews made it seem like an advanced version of Angry Birds. I'm pleased to say that I was wrong: The game looks fantastic and has a great combination of humor, strategy, action, and just overall "fun" and I found myself playing for hours without even realizing it.

You play as the "Protector of the Realm," a fierce fighter equipped with both a sword and a bow. After years of war, peace between the Barbarians and your kingdom was restored after a goddess cried two tears that turned into protective crystals. Then the barbarians attacked, stole your crystal, and threaten to take over the entire planet. Or something like that. The plot of the story, while mildly entertaining, isn't the draw of the game.

CastleStorm does a great job of easing you into the game and not overwhelming you with choices early on. You start by controlling a simple ballista that fires arrows, and after you learn to use that tool are provided with a greater array of projectiles such as boulders, magic potions, and even sheep. 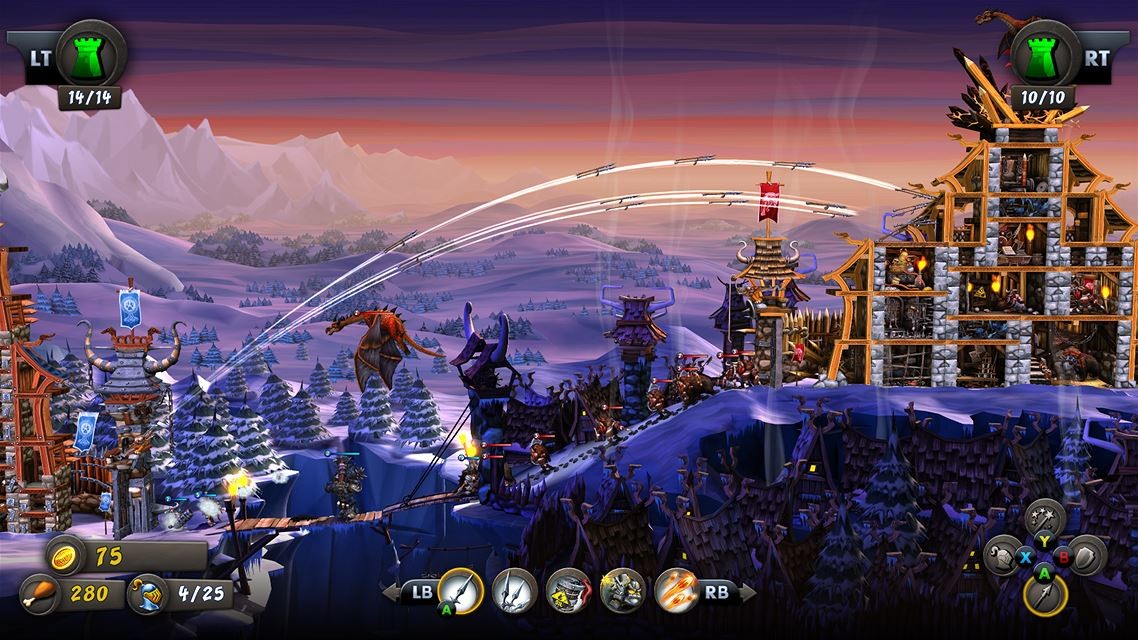 After a few levels of the game, you add more resources to your arsenal. Pressing the X button brings up your selection of troops, where you summon swordsmen, archers, knights, and the like, to go attack your enemies. Pressing the Y button shows your selection of magic, where you can rain swords down on your opponent, heal your troops, or even teleport yourself onto the battlefield.

There's a variety of levels available in the campaign. While most consist of defending your castle while trying to either destroy the enemy castle or steal their flag, there are others mixed in such as using only your hero to attack the enemy, or protecting your allies as they try to escape.

While there's limited strategy in the beginning of the game, after you get a few levels into it, you have decide how to arm yourself for the upcoming battle because you're only allowed a maximum of five ballista weapons, troops, and magic powers per level.

In most cases though, the enemy sends troops that begin at the right hand side of the screen and move towards your castle at various speeds depending on the type of troop. For example, a dire wolf will sprint across the screen, but doesn't do much damage, while a rock troll plods slowly by but is fiercely strong and difficult to kill. When they get to your castle, they begin destroying the door that's protecting your flag. Once in, the troops take the flag and try to take it back to their side of the screen. 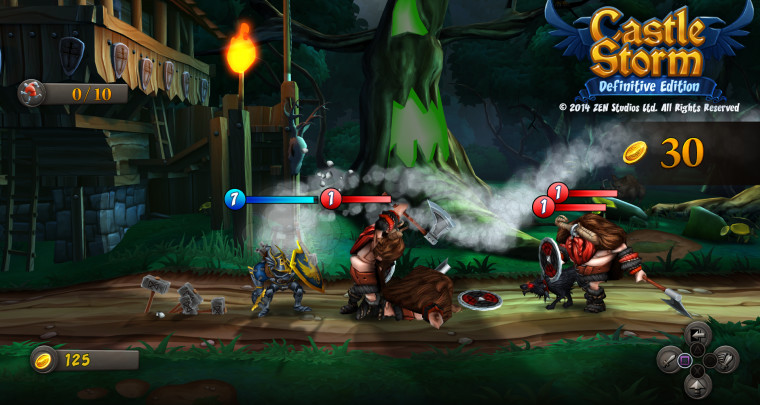 You counter this by firing your ballista, summoning troops, and raining down magic, and that's where strategy is important as there are numerous ways to win a level. First off, friendly fire is in effect, so when your troops are in battle you have to make sure you're not accidentally hitting them and that's difficult with some of the area effect projectiles you have. Second, troops are summoned based on how much food you have in your castle and increases at a steady rate but there's a maximum so you can't summon a dozen knights at the start of a level, but you might be able to summon a dozen wimpy swordsmen early on if you choose. 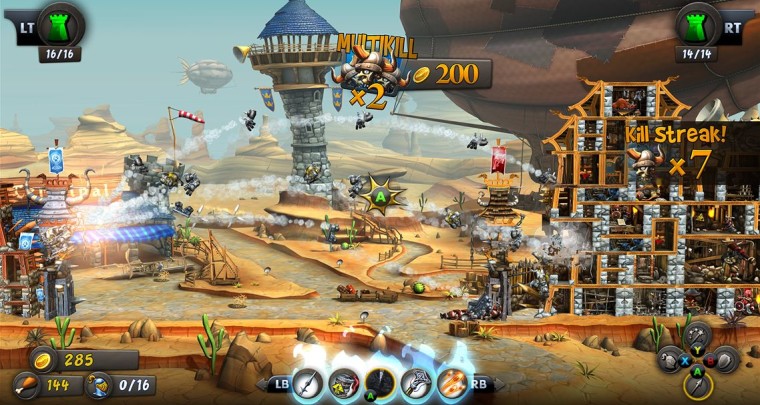 Once you complete a level, you're ranked on a scale of one to five stars, and given gold based on how well you did. Spending your money is another strategy aspect of the game, since you have to decide what pieces of your arsenal you want to upgrade. I heavily invested in the main ballista arrow early on, only to find that it's not very effective later on in the game. In addition, you'll find that on some levels, you don't have access to things you had in previous levels; for example, sometimes you have no access to your ballista during a mission. You can also upgrade components of your castle, making it more difficult to destroy, increasing food productivity, or granting other bonuses to your troops.

There's other modes available as well, including multiplayer and castle building. Unfortunately, I wasn't able to test the multiplayer functionality during the review period because nobody else was online when I was. I suspect that is no longer a problem since the game is now released to the public. 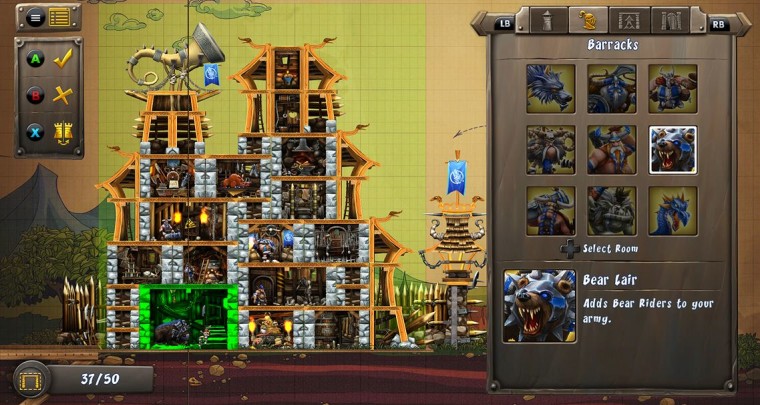 Castle building, on the other hand, sounded promising. You get to architect your own castle, and try to build it in such a way that the enemy can't easily destroy it. You also figure out where to put various rooms, like the pantry (for troop food), for maximum effectiveness. Unfortunately, this mode felt a little clumsy on the console and while I wanted to love it, I just couldn't get into it. I suspect it'd be a lot more fun on a PC because it felt like it was made for a mouse.

Overall, I have to say that I was extremely surprised by just how much I loved playing CastleStorm. I went into it thinking that it was going to be an Angry Birds type of game, but instead found that it's a strong strategy game that includes a good dose of humor and is overall just a lot of fun to sit back and play. 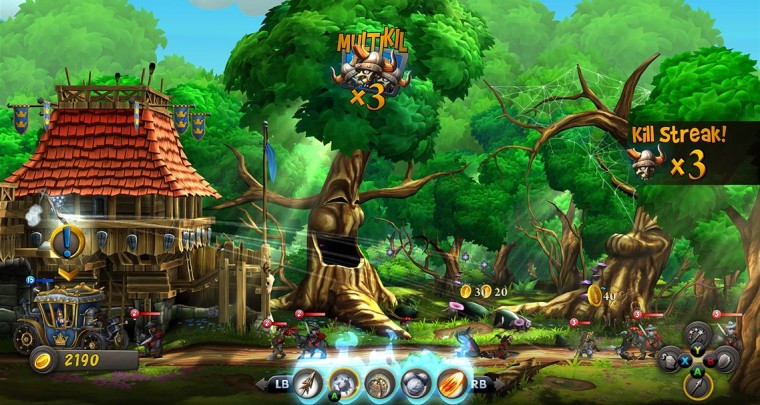 CastleStorm isn't without some flaws, but they're very minor. There's minimal voiceover work, with most communication consisting of grunts and groans (along with reading text on the screen). At first this seemed extremely out of place, but after a few levels it added to the whimsical nature of the game. I also found creating a castle difficult to do on the console. But the positives - picking what weapons/troops/magic to bring into battle, upgrading your tools between levels, and of course, launching things at your opponent to destroy their troops and castle, are all very rewarding and kept me playing this game far longer than I expected.

The Xbox One version of CastleStorm include previously released DLC, The Warrior Queen and From Outcast to Savior. The game runs at 60fps in 1080p, making the game look extremely good. It's currently available in the Xbox Store for $14.99.