"Sheltered" is a strategy game developed by Team17 Digital - the same developers behind The Escapists and The Escapists: The Walking Dead - which focuses upon survival, and time and resource management. While the game has been available on Steam and Xbox One for a few months now, Sheltered just made its way to Windows 10 Store last week.

Unfortunately, the game isn't available on Windows 10 Mobile as of yet, but on the brighter side, it does offer Xbox achievements. And while the game may not appear to be graphically appealing at first sight, it does present a significant challenge to players as they try to keep a family of people alive in an underground shelter in a post-apocalyptic world. 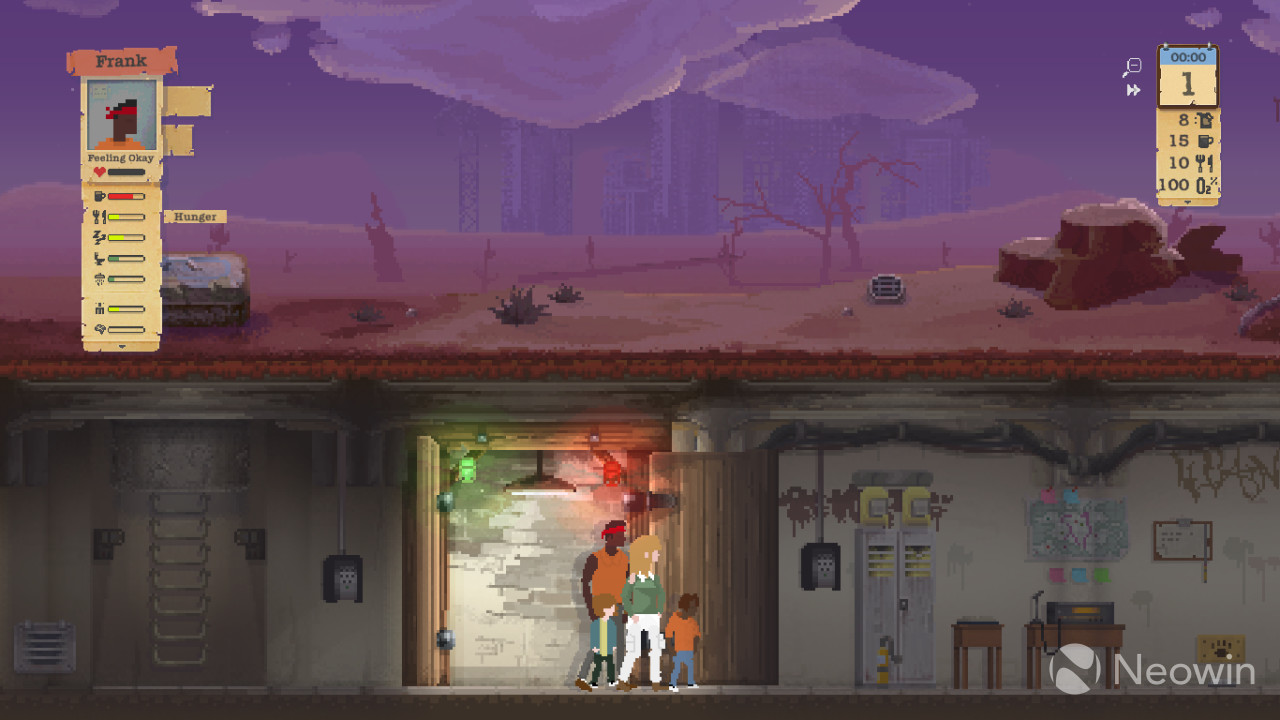 Sheltered tasks players with a straight-forward objective: try to keep your family alive for as long as possible in a post-apocalyptic world. As soon as the game started, I had to create a family of two parents, two children and even a pet (which could be a dog, a cat, a goldfish, or even a snake!). Due to my natural affection for cats, I chose an orange tabby cat as my family pet. Each character, which also included the cat, had specific characteristics and appearance which I could modify to my own liking.

To be honest, customizing my characters abilities and appearance isn't something that I'm overly fond of. In fact, even when I play simulation games or role-playing games such as The Sims or The Elder Scrolls V: Skyrim, I tend to either choose random skills or simply randomize my character, which is exactly what I did in Sheltered, to my great regret, as I later found out. 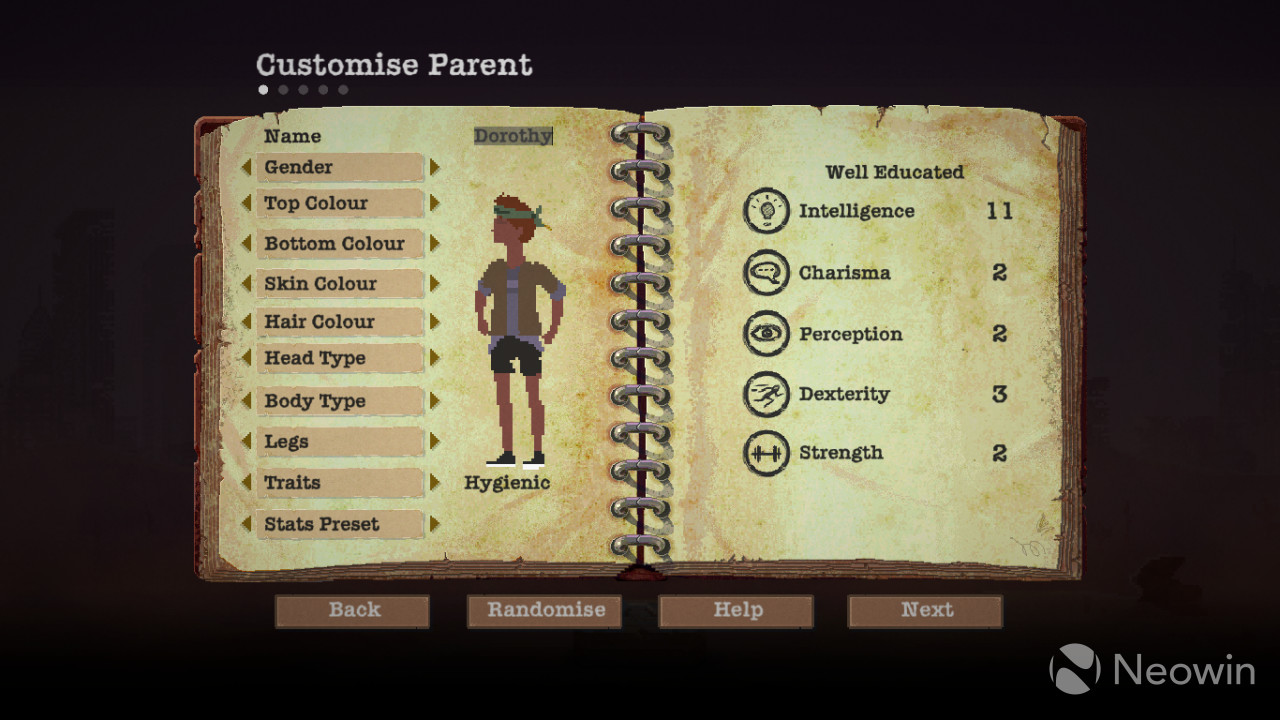 In order to keep my family alive, I had to ensure that they ate their food on time, went to the loo when required and to sleep when tired, drank their water when absolutely necessary and ate their medicine if ill due to radiation or some other external cause. This game has made me terrified of all the responsibilities on my shoulders should I ever have to live in an underground bunker with four other family members.

The game began with a tutorial, like most games. The controls were fairly standard being a strategy and simulation game. I was quite pleased to see the game utilizing the keyboard as well as the mouse effectively. I could navigate across different rooms in my shelter by simply moving the cursor to my required direction on the screen, shift between my family members using the 'Q' and 'E' keys, zoom in or out using the left control key and select and modify various objects using the mouse buttons. 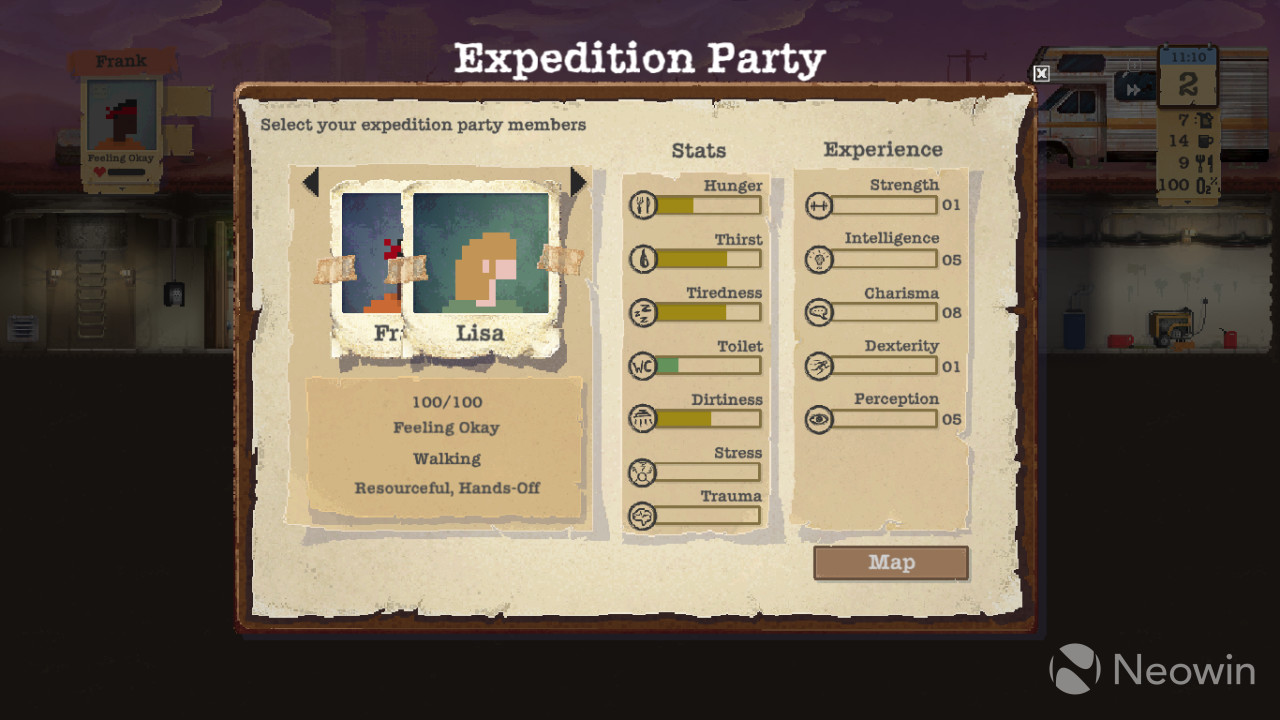 After explaining the controls and some of the major requirements that I needed to survive such as drinking water, eating food and keeping the generator running, the tutorial ended rather abruptly and I was simply tasked to survive.

Although I had understood the controls perfectly well, I had expected a relatively longer tutorial that would walk me through all the mechanics in the game (trust me, there are hundreds of things to do in Sheltered!). And I feel no shame in admitting that for the first ten minutes or so, I was at a complete loss as to what I was required to do to stay alive. I wandered across my shelter aimlessly, drank water at leisure and discovered that I had a crafting table in the basement which I could use to build various tools including shelves, beds, a makeshift shower and more. Simply put, I was bored to death during the first ten minutes.

However, the game slowly grew on me as I began to understand the dynamics and mechanics of the game. I could wear an anti-radiation suit before leaving the shelter for exploration and scavenging, build extra rooms in my sanctuary, manage and ration my supplies and put my family members to work on various other jobs. Meanwhile, my cat could wander around the shelter without any purpose. 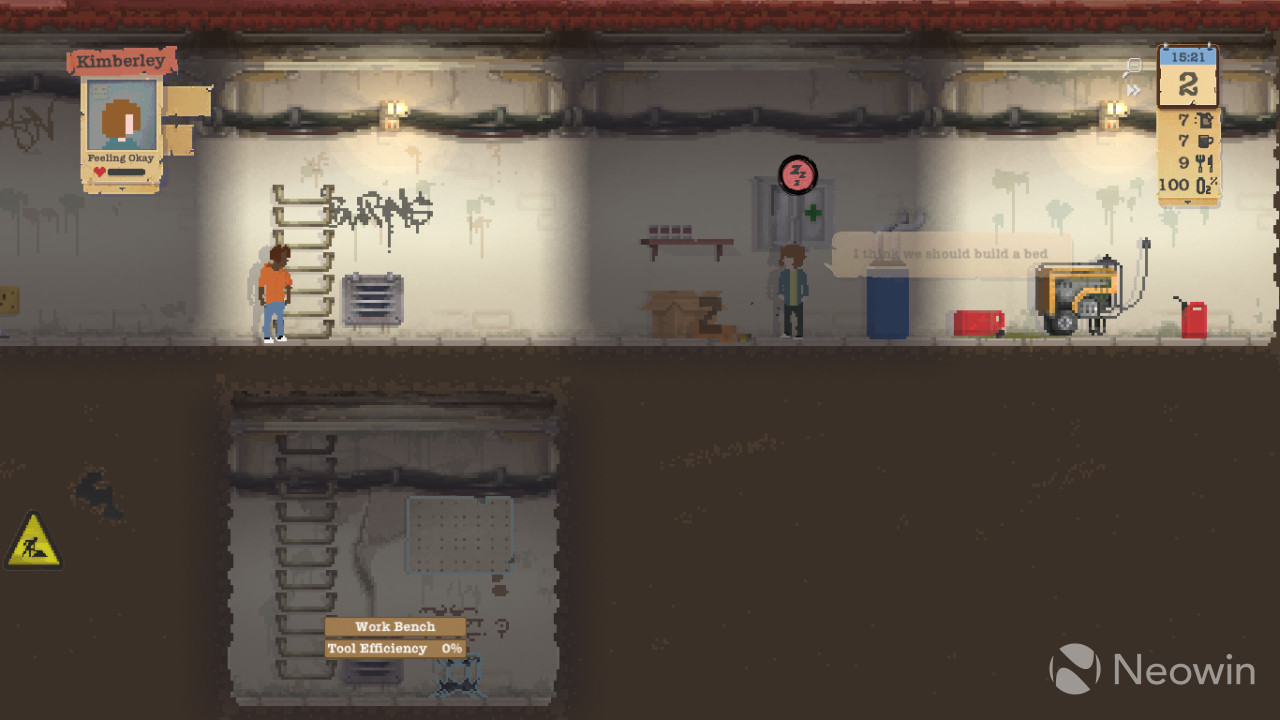 While Sheltered doesn't deal with an apocalypse caused by zombies, being a huge fan of The Walking Dead (both the comics and AMC's TV show), I re-imagined the situation as being brought upon by zombies, ahem...walkers. This made the overall experience considerably more fun for me as I sent out family members to hunt for supplies or to search for other survivors as I devised strategies to build the next Alexandria, albeit, underground. Occasional hints popped up from time to time to aid me in designing an indomitable bunker.

Meanwhile, the familiar feeling of dread hung upon me, the fear of being attacked by strangers, starving to death and then burying the dead members of my family, or worse, harvesting them in a fridge and eating them when needed (yes, as repulsive as that may sound, you are allowed to do it in the game). I also began to feel a bit guilty as I forced my children to build extra rooms in the shelter manually, but all that guilt soon evaporated into thin air as soon as I noticed that my son, who had just finished crafting a bed after 24 hours of manual labor, had intelligently decided to sleep in it without my permission. Darn kids... 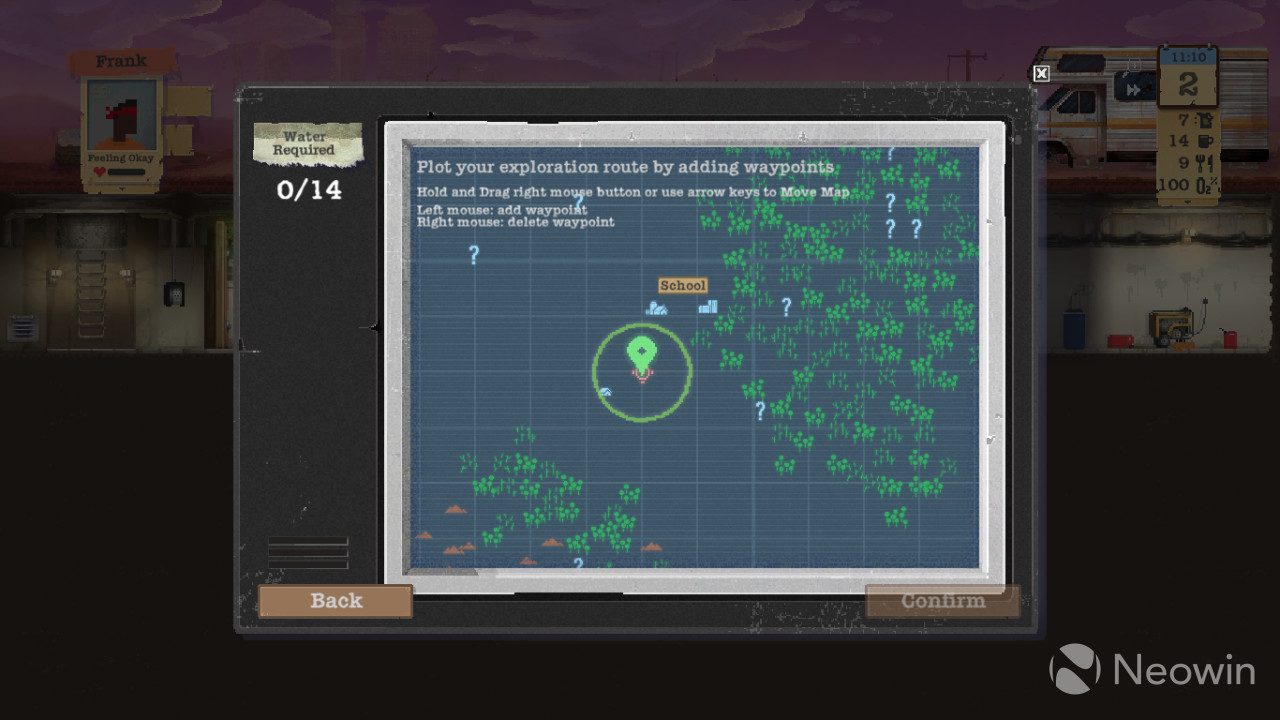 Something that I really liked about the game was that I could choose to either manually control every action of my family members or automate some of their actions so they fulfill any of their requirements on their own accord. While some players vested in the simulation genre might want to control every action of every character, I personally prefer the latter because than I could focus on more important things, such as tracking any expedition I had sent out.

Expeditions are yet another exciting feature in the game. I could send out parties of family members to search for supplies. If they met any other survivors on their perilous journey, I could choose how to interact with them. Moreover, the crew I sent out would also frequently radio me back, inquiring about various aspects of their expedition. My responses to them greatly affected the outcome of the expedition as well, which is quite amazing, since it increases the replay value tenfold.

But more importantly, or so I believe, this game has gone a long way in making me believe that should ever an apocalypse actually occur, I have the resources and the strategies required to survive in an underground shelter for at least 15 days before I succumb to my inevitable death and am devoured by my family members.

With pixelated graphics similar to the previous games developed by Team17, Sheltered probably isn't designed to be visually enticing and appealing, at least to people who are accustomed to graphic-intensive games such as Quantum Break or Forza. This corresponds suitably with the game's gloomy setting and prolonged feeling of dread.

The slow and sombre soundtrack fits in well with the surroundings and the sound effects are quite fantastic, to say the least. There are distinct sounds for a door creaking, construction of a new room, and people walking or crafting new items. 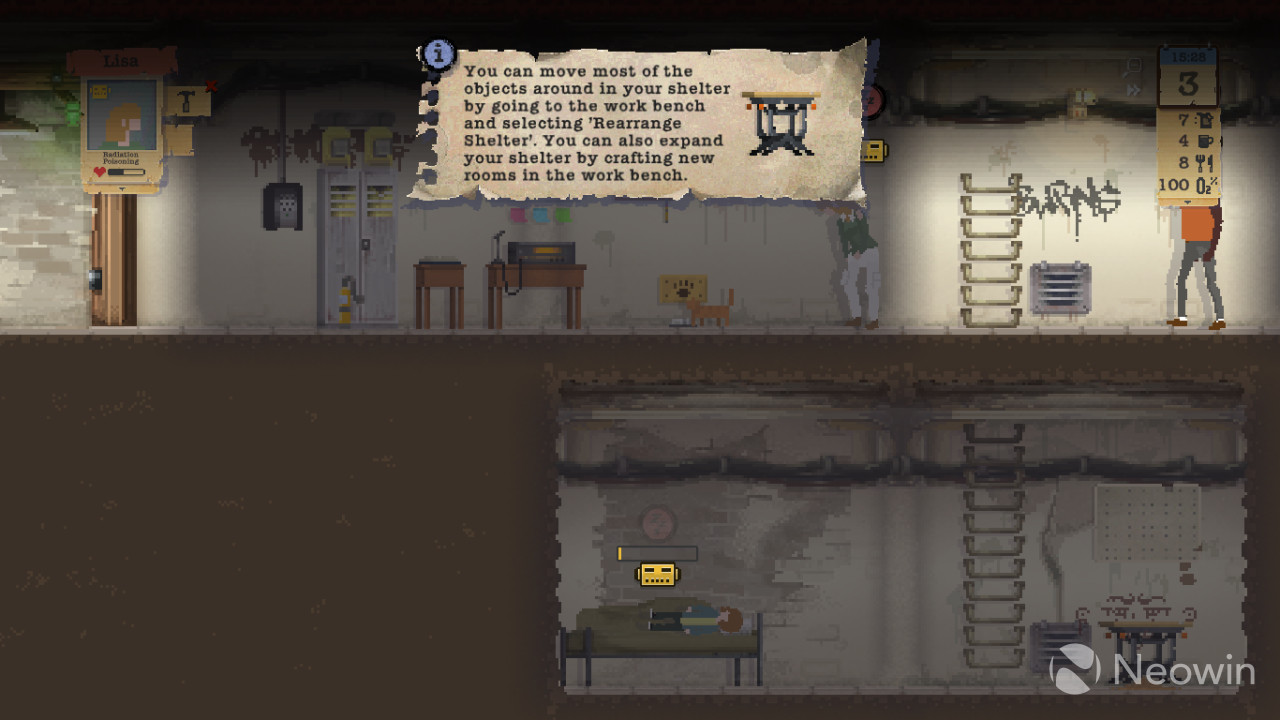 The 2D design and presentation of the game pleasantly reminded me of the "ant-farm" view from XCOM: Enemy Unknown, which as I have noticed in the past, is well-suited to games which feature some form of micro-management.

I admit that I didn't want to spend $15 on Sheltered when I first saw its screenshots in the Windows Store but when I realized how details had been intricately carved into each object in the game, I correctly realized this was a purchase I probably wasn't going to regret.

You can't go wrong with Sheltered, really. While the game starts off a bit too slow, and it'll take you some time to fully understand its mechanics, it'll grow on you with the passage of time. The number of activities, the level of detail, customization options, time and resource-management, replay value, and even realism to some extent, are expertly handled by the development team.

Xbox achievements in Windows 10 games are always a plus as well. Any achievement I earned instantly synced with my Windows 10 Mobile, providing me with a notification on my phone almost instantaneously. With 21 achievements and 1000 Gamerscore to achieve, there's little more that you could ask for. 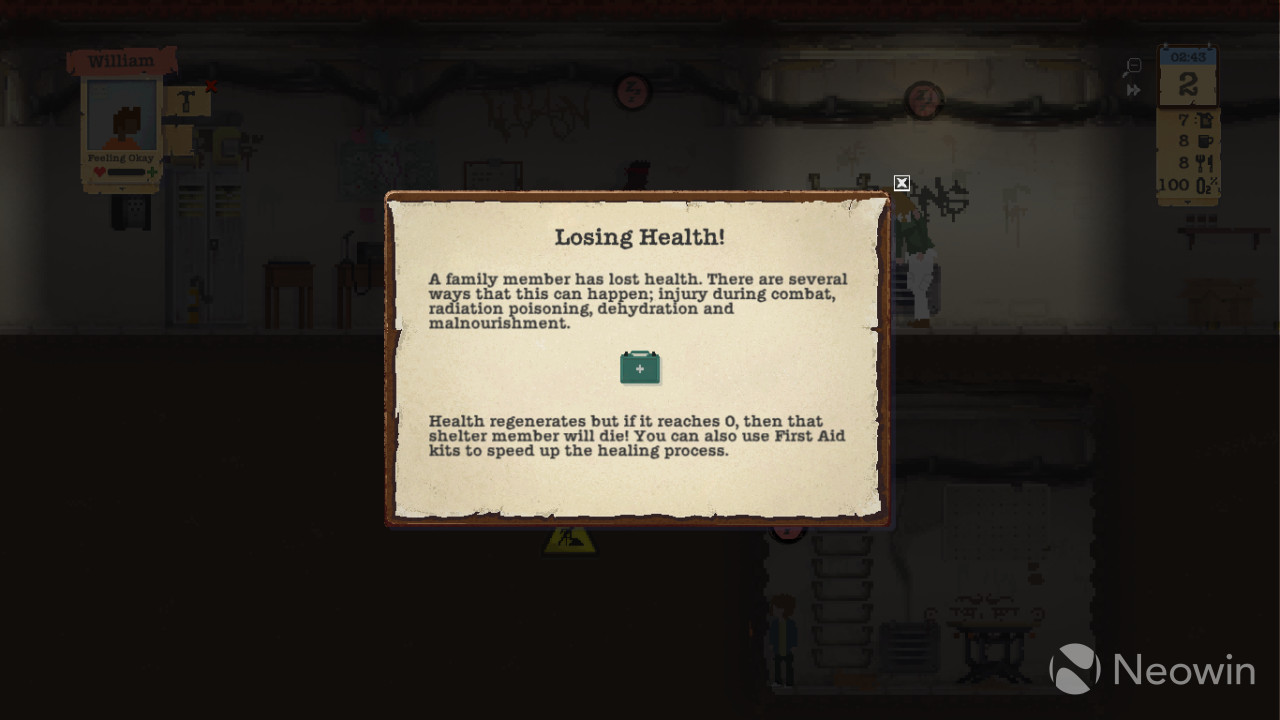 A minor gripe I have with the game is that it doesn't save my gameplay settings. Sheltered always begins in windowed mode and the default display resolution (1366x696) is lesser than that of my laptop (1366x768). However, I do hope the company fixes this issue in a future update.

Overall, I strongly believe that if you're a fan of resource-management games, pixelated graphics, The Walking Dead or survival games in general, Sheltered is an absolute gem of a game that you wouldn't want to miss.

You can download Sheltered from the Windows Store for $14.99.

What do you think of Sheltered, would you like Neowin to review any other Windows 10 Store games? Let us know in the comments below or reach out to me via Twitter @WinPhanPakistan.

Sheltered was reviewed via a copy purchased from the Windows Store by the reviewer himself. The game was tested on a Dell Inspiron 5558 with the following specifications: 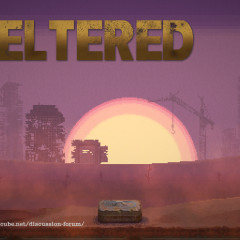 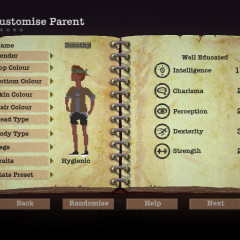 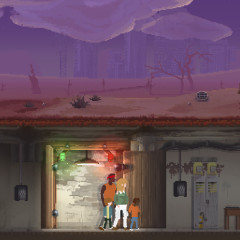 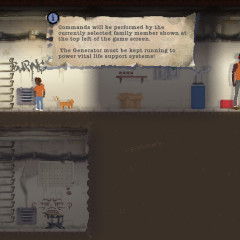 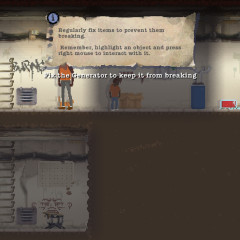 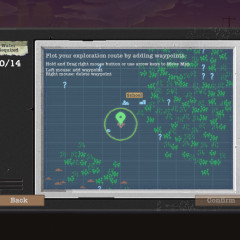 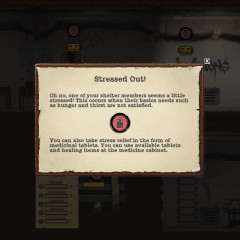 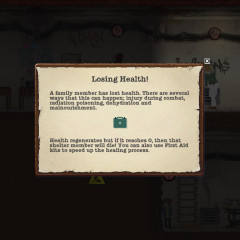 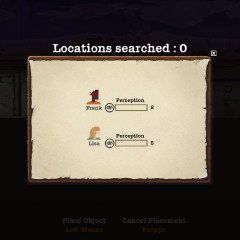 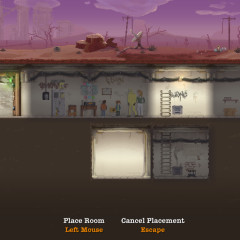 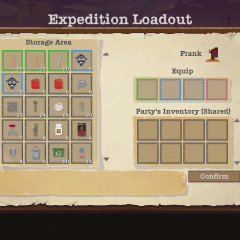 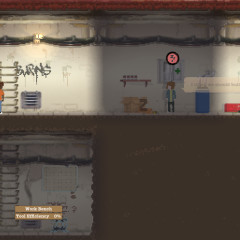 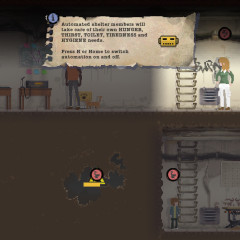