The Whispered World is a point-and-click adventure game that made its way to the PC back in 2009. Developed by German game studio Daedalic Entertainment, it garnered generally favorable reviews from users and critics alike. A few criticized the game for mediocre voice acting, but many praised it for the visual representation, detailed script and likeable characters. Likely encouraged by the positive response, Daedalic announced that a sequel to The Whispered World would be released in 2014.

Fast forward to today, and after missing several deadlines, Daedalic Entertainment has finally released this highly-anticipated sequel. Surprisingly, the studio published the game under a completely different title from its predecessor, opting to release it under the name Silence. Priced at $29.99, the point-and-click adventure title isn't exactly graphic intensive, with the recommended specifications as follows: 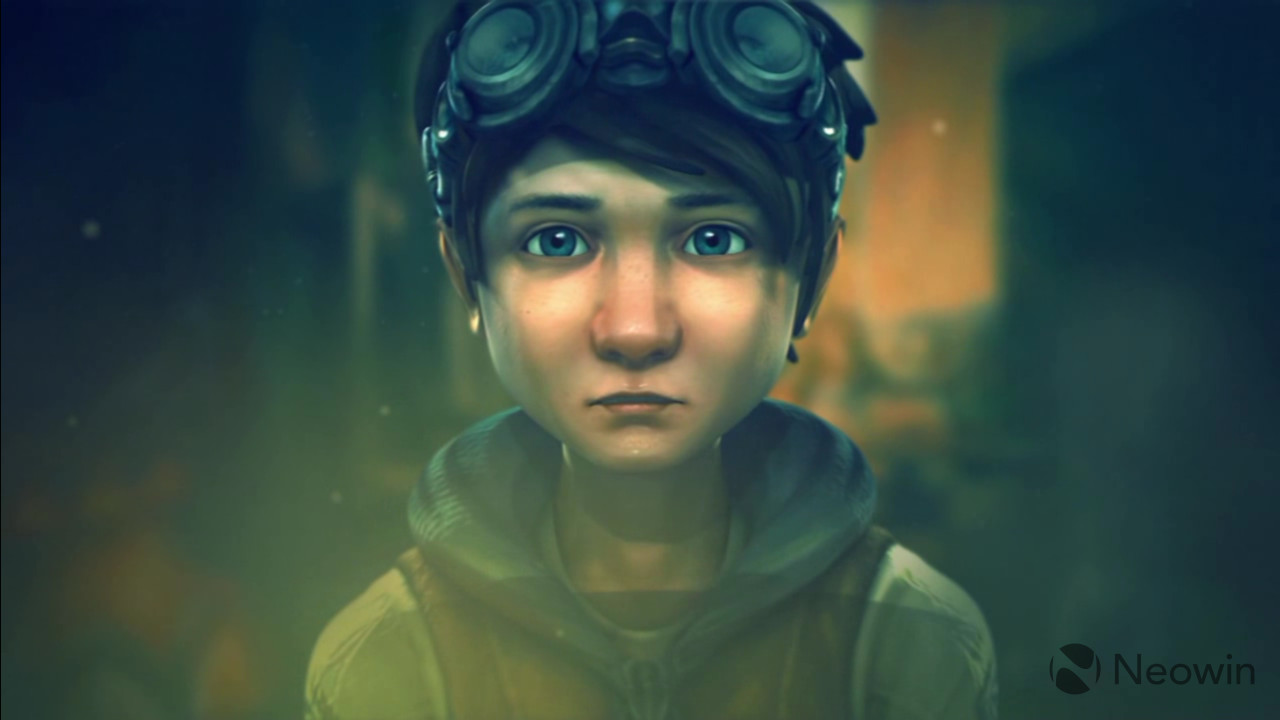 The paragraph below may contain spoilers for The Whispered World.

Before I go into the details of Silence, I have to confess, I have never played its predecessor. With that being said, I did read up the plot details and synopsis prior to playing the game, which revealed that The Whispered World ("TWW "for short) was set in a fantasy dream-like world and revolved around a sad clown named Sadwick. Sadwick learns that the world is about to end, and successfully prevents that by the end of the game, where he learns that he is actually a boy lying in a coma in a hospital. Sadwick then manages to wake up from his comatose state and return to the real world.

Even though I didn't play The Whispered World, admittedly, I found the concept and the story itself quite intriguing. This is probably one of the reasons why I was so eager to play and review Silence, which promised more of the same.

Silence kicks off with the player taking charge of 16-year-old Noah - the boy who woke up from the coma in the previous game. In an action-packed sequence, Noah and his younger sister Renie rush to find shelter in a bunker during bombardment in a war. However, just as they are beginning to feel safe, another bombing occurs near their bunker, destroying it, separating the siblings and rendering Noah unconscious. 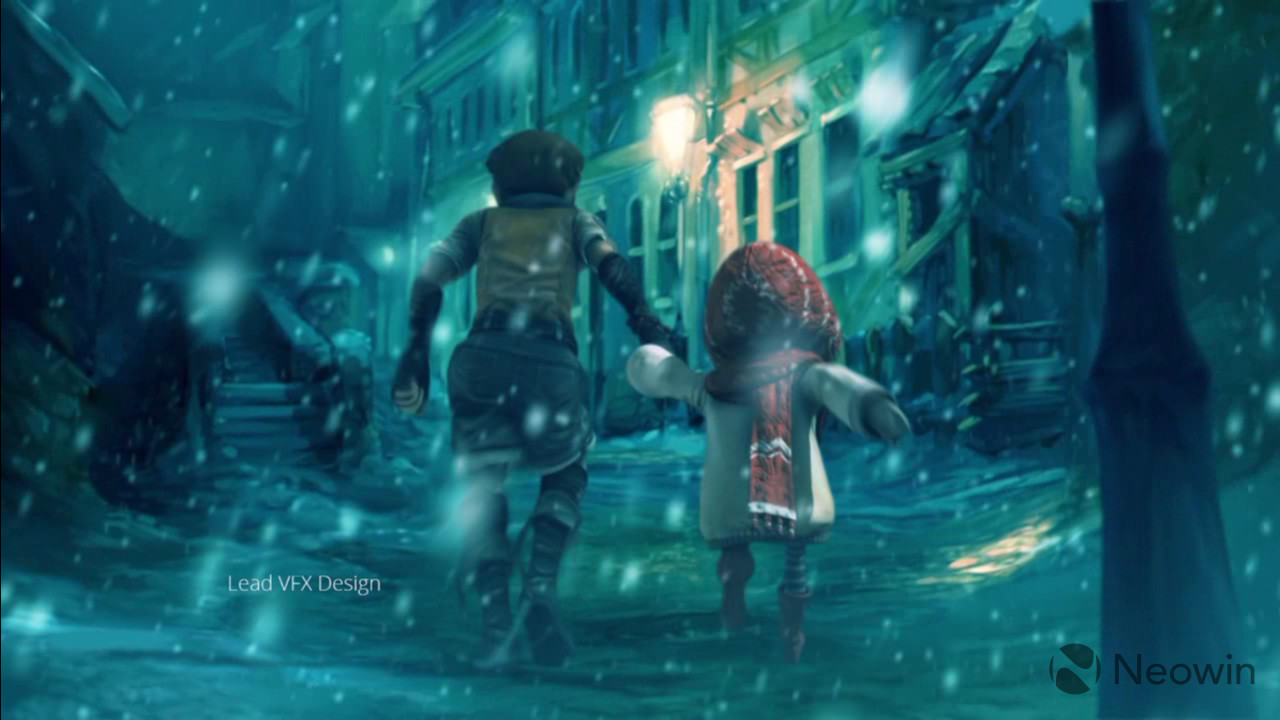 Admittedly, the story is very intriguing and kept me well on the edge of my seat throughout the duration of my playtime. There were moments of pure enjoyment, tension, satisfaction and the narrative was emotional enough to make me play the game for lengthy periods as I explored the world of Silence.

With that being said, one lacking aspect I noticed about Silence was that while it referred to events that took place in The Whispered World, they just weren't that well-explained. There were a few genuinely confusing moments when I was trying to figure out the identity of a character or a reference in a dialog, among other things.

But before you go on blaming me that it's my fault that I found the narrative confusing at times because I hadn't played The Whispered World, it is important to mention that I have done the same with various game series in the past as well. I played Halo: Reach after playing Halo: Combat Evolved, and Assassin's Creed II after Assassin's Creed: Black Flag, and sure, there were continuity issues, but usually they were either minor enough to be dismissed or they were very well-explained.

The fact is that there are instances when a new game in a series launches, and you finally decide to play it for one reason or the other. Barring exceptions, you usually don't complete all titles in the series before playing the latest one until you're sure it's worth your time. Or at least, that's the way I've played numerous games.

I did play the game with a few friends who were familiar with The Whispered World and they understood various aspects of Silence way better than I had. Hence, my point stands that the curve to understanding the narrative is slightly steeper than most games; if you've played TWW, you'll likely have no problem, but if Silence is the first game you've played from the series, you might find yourself wondering who a character is or what someone is talking about at numerous instances in the game. 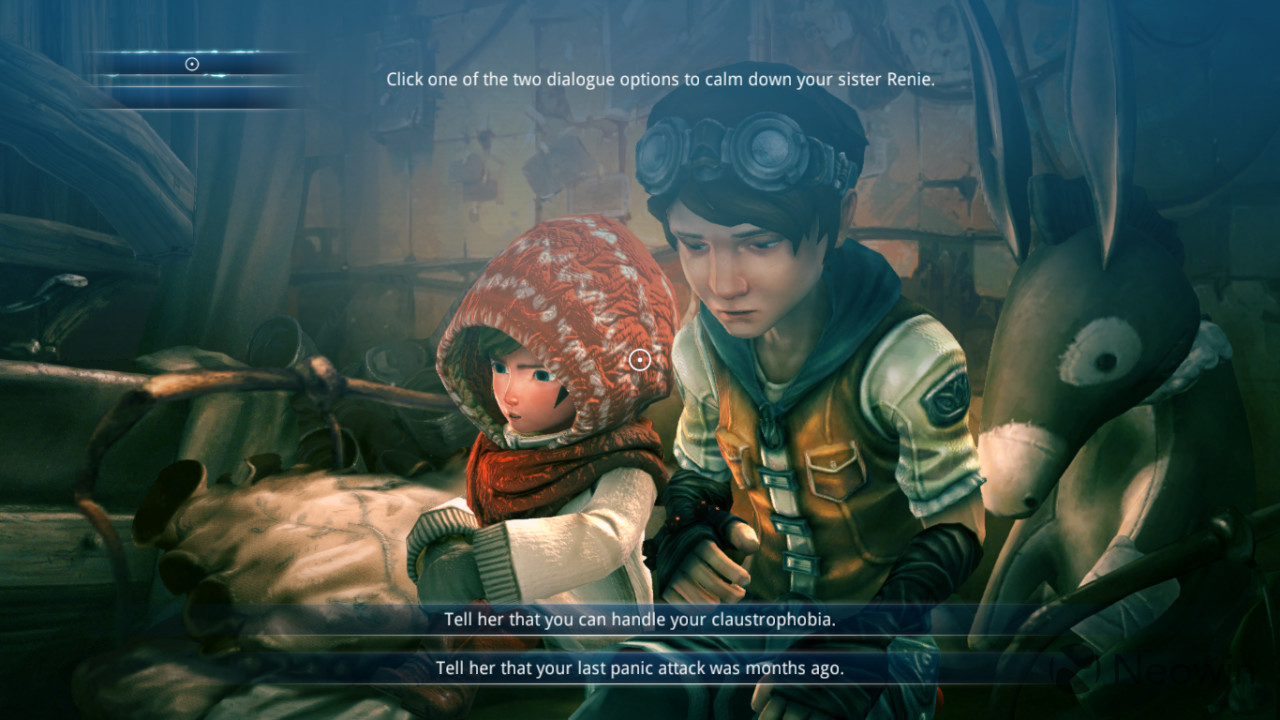 Silence's gameplay is a rather interesting thing to talk about. When I first heard that Silence was a "point-and-click" adventure game, I was rather skeptical. Sure, point-and-click adventure games work well on smartphones as I've mentioned several times, but rarely has the experience mirrored for me on PC as well, with a few exceptions, of course.

So, it was quite a pleasant surprise when I learned that Silence isn't a traditional point-and-click game per se, but a rather interesting blend of choose-your-own-adventure style of gameplay as well as the former. Think more along the line of Telltale Games' critically acclaimed games like The Walking Dead, Game of Thrones, Batman, The Wolf Among Us, and more.

It isn't as action-packed as the aforementioned games but it's definitely refreshing. It focuses more on the point-and-click style of gameplay, allowing you to click on objects to interact with them, move and perform other actions. However, instances where you have to choose your response to a dialog or situation are well-spread throughout the game. There are plenty of puzzles to solve and most are rather well-designed - although a few left me scratching my head as I accidentally solved them.

There isn't much else to talk about regarding the gameplay, really. It's simple and there isn't really a learning curve. If you have played and enjoy Telltale's choose-your-own-adventure style games, you will feel right at home. 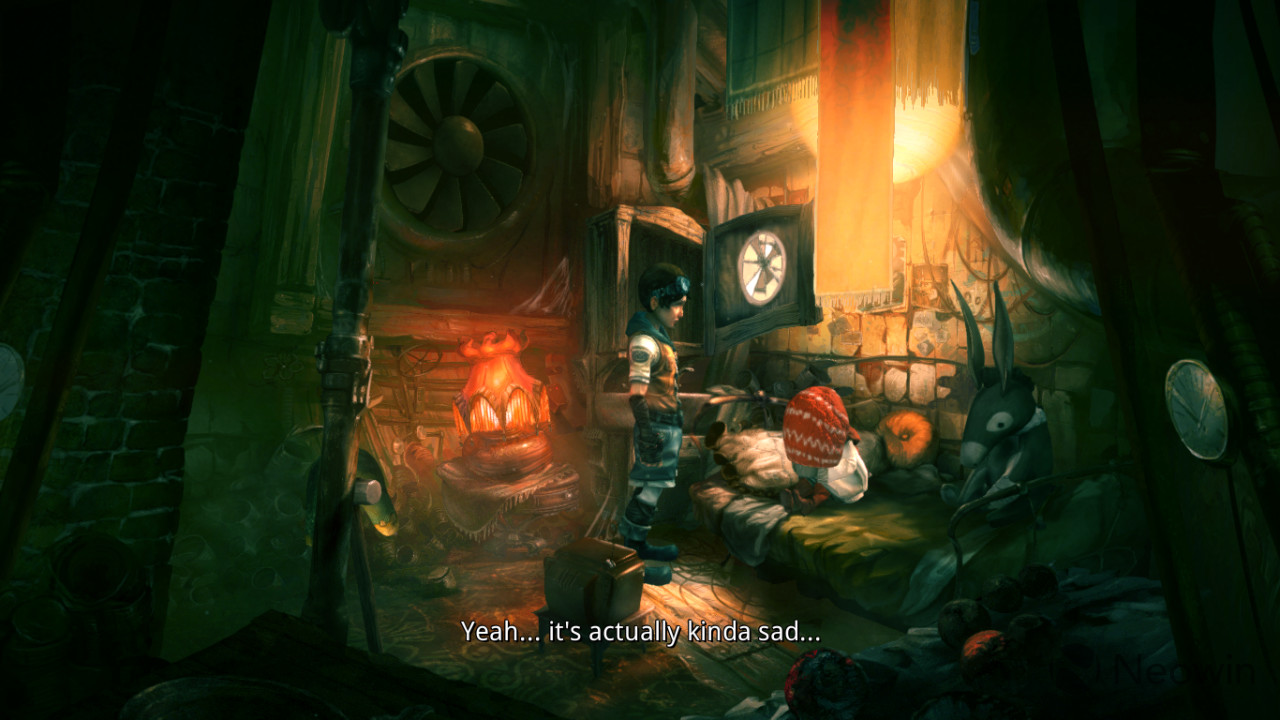 The visuals of the game is one aspect where Silence excels. The characters are rendered in 3D but most of the environment consists of beautiful hand-drawn 2D backgrounds, that are simply amazing to look at.

Admittedly, there were several instances in the game where I would simply stop and stare at my screen, trying to absorb all the surroundings and the scenery; it's that gorgeous-looking. The characters are rendered in detail, and the environment is intricately designed. Upon close inspection, the level of detail is simply astounding and it's clear that a lot of attention was paid to make the game look as attractive as possible.

With that being said, there was one drawback, but it's not related to the visual presentation ; the voice acting. It's just not that good. I read a couple of reviews for The Whispered World as well and learned that a few reviewers had run into the same problem. To be clear, it's not bad, but it's clear that it needs a lot of improvement. Many characters sound older than their physical appearance, which can be rather off-putting, and it's simply a stark contrast between the beautiful world and the characters' tone.

It impairs the player's ability to fully understand the emotional depth of the character, with there being several instances when a character's auditory response is the polar opposite of what you expect them to sound like. While this all this sounds rather bad (no pun intended), it's not. The voice acting is mediocre and although it does blunt emotional well-written dialogs sometimes, it's generally OK. 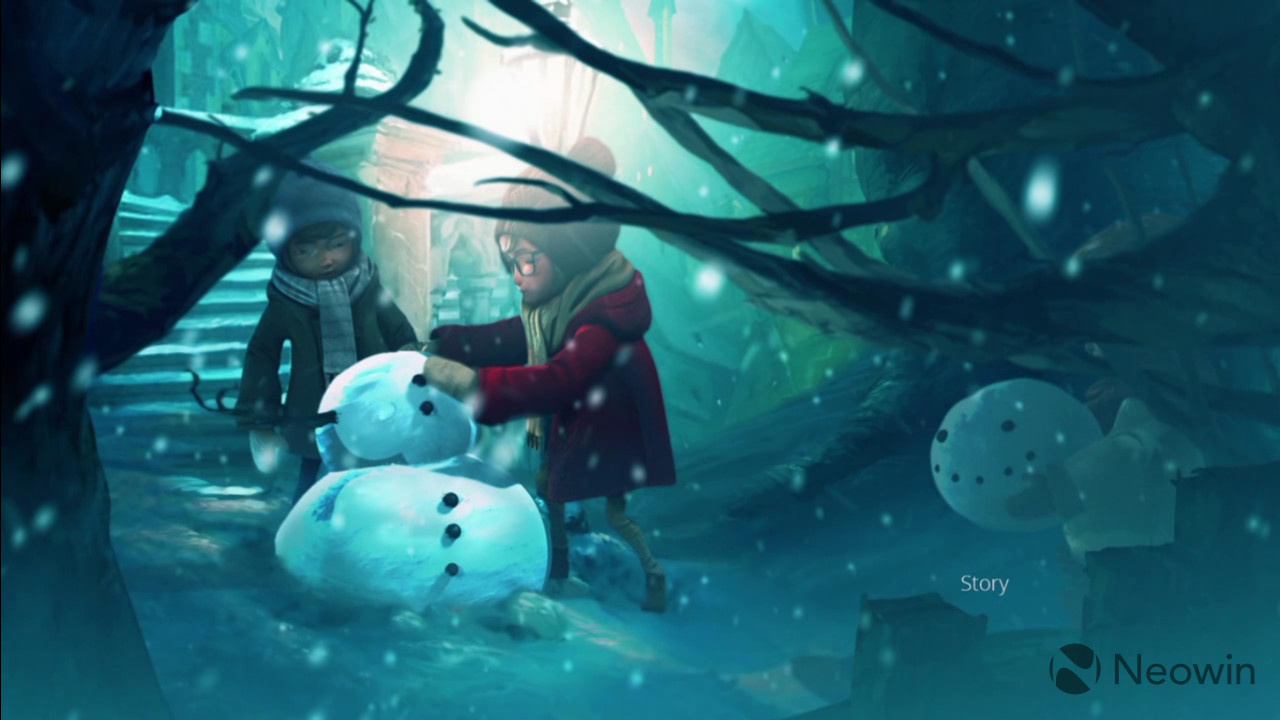 All in all, Silence is a very enjoyable, well-designed and intriguing game. The narrative demands some time to get used to, but once you do, it gets extremely interesting. I felt invested in the game even though I hadn't played The Whispered World, and there were times when several hours passed by without me even realizing it.

The visuals are outstanding and perhaps the best that I have seen in point-and-click adventure games in a long time. The 2D artwork is intricate, the environments are mesmerizing and the level of detail in the 3D rendering of the characters is very high, providing for an overall aesthetically pleasing feel and visually appealing looks.

If you've played choose-your-own-adventure games or point-and-click adventure games and enjoy either - or preferably, both - you can't go wrong with Silence. Apart from some shabby voice acting, the game is absorbing and well-designed, and should keep you hooked for hours.

Silence launches on November 15 on PC (Steam and GOG.com) and PlayStation 4 and will be rolling out gradually. It is also slated for an official release on Xbox One this Friday. You can purchase it for $29.99 on PC by clicking on one of the following links.

Silence was reviewed via a copy provided by the developer. The game was reviewed on a Dell Inspiron 5558 with the following specifications: