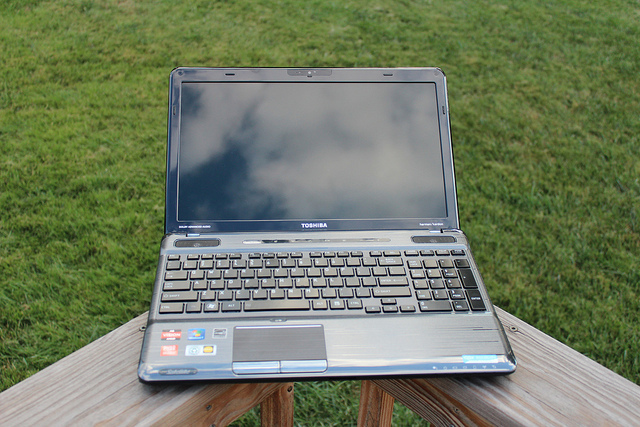 There are a lot of laptops on the market, literally thousands of them. So when it comes time to select your next laptop, it’s important to do your homework.

Toshiba has sent Neowin one of their newest Satellite P755D-S5266 laptops. This unit rings up the register at 749.99 which places it in the middle of the road for price. It comes in well below the high end gaming laptops and below those thin and light models, such as the P830 previously reviewed by Neowin. But it does come in significantly higher than a netbook and some other entry level models. So what does one get when they purchase the P775d-S5266? Some of the key specs are listed below, the entire spec sheet can be found here. 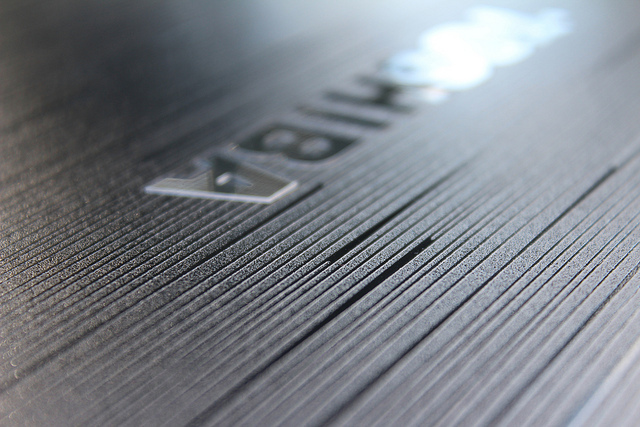 The first thing you notice about this laptop is that it is large. It, in no way, tries to hide this fact. The 15.6 in screen and full size keyboard with number pad let you know right away this is not a portable powerhouse for long plane rides.

The shell of the laptop is made of a plastic material that has a bit of wave to it. It is not a smooth surface but it is not sharp either.  The trackpad is off center, which to some with OCD may drive them nuts, but when using the device it is perfectly placed. If it was centered on the laptop it would make for an awkward user experience.

The overall feel of the device is reflected by its price point. Sure, we would love to see a higher grade plastic or even metal, but then again it’s price reflects what materials are used on the laptops. For that, the materials are satisfactory but do not excite.

There is also a touch sensitive bar of additional buttons that give quick access to Wi-Fi, volume up/down, play/pause, backlight on/off, and eco mode. Touch sensitive buttons are a personal preference, some people enjoy them while others are frustrated. Unlike others we have seen on laptops (such as the Hp 6530b), these are responsive and easy to use. But, they still don’t provide any tactile feedback. 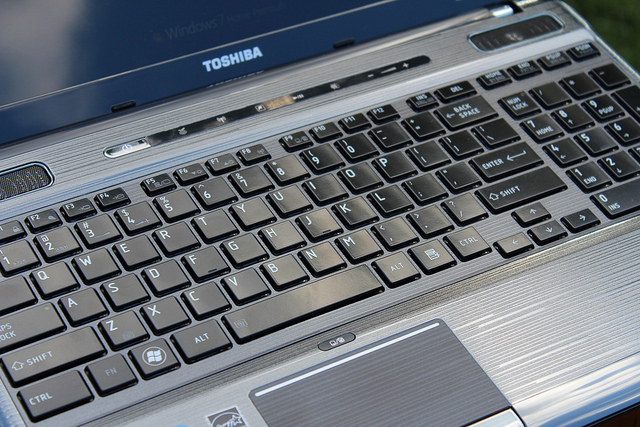 The keyboard on this device feels much like that of the R830 which makes sense as they are both produced by Toshiba. With the R830, we said that the keyboard felt cramped because of its size. The P775 has a full size keyboard and relieves most of the issues we had with the R830.

The P755 keyboard is expansive and includes a number pad. The keys have adequate travel distance and have just enough snap that it leaves the user confident of their keystrokes. We are happy to report that this keyboard is also backlit, a big thumbs up for this feature.

The keys do retain the same materials as the R830 and some may find them a bit slippery. We would opt for a slightly more resistive material but you do get used to the surface after minimal use. 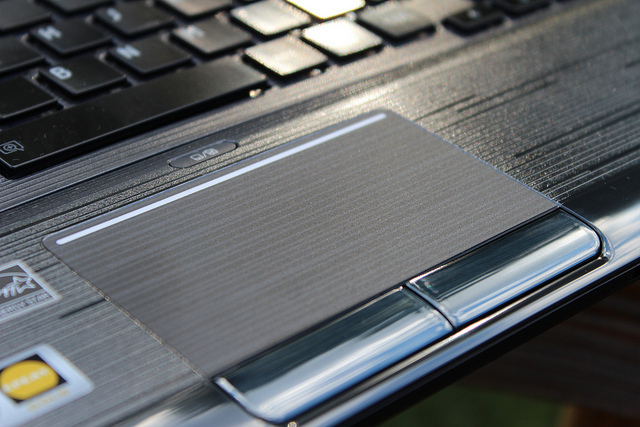 The trackpad is made of similar materials as the shell of the laptop and it also has the same groves/ridges as well.  The trackpad is a bit of a sticking point as it is accurate and responsible but the trackpad buttons leave a lot to be desired.  The assurance of a proper click is not there on right or left clicking when using the buttons as the key action feels hesitant and shallow. This feeling gets aplified if you use an edge of the button as opposed to the center.

If you can overlook the trackpad buttons, the surface area is adequate but still falls well short of the MacBook experience. But then again, this laptop is priced well below the entry level Mac. The trackpad gets the job done, but even at this price, could still use a bit of refinement.

The LCD on the P755d is LED backlit and is vibrant for a laptop screen. The off angel viewing both horizontal and vertical is acceptable and is easily viewable those who are not directly in front of the screen. On sticking point is the 1366x768 which leaves room to be desired.  A higher resolution screen would do a lot of justice on the 15.6 in screen. 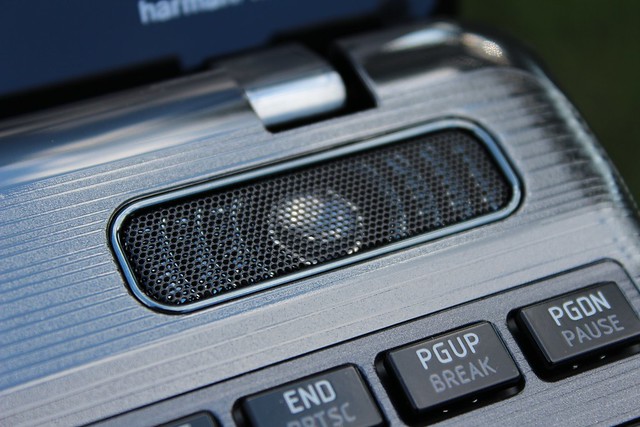 A pleasant surprise for this laptop is the included Harman/Kardon speakers which, for a laptop, do an exceptional job at audio reproduction. While the lows are still a bit weak, mids and highs were crisp and acute. There was minimal distortion at high volume, while not replacement for your home audio system, it does perform at levels well above most other laptops.

The P755 comes with multiple CPU/GPU combinations but our particular unit has the AMD Quad-Core A6-3400M and is paired with AMD Radeon™ HD 6520G that together make for a formidable mid range laptop. It’s important to remember that despite the size, this is not a gaming laptop, nor does it play one on TV.  But the radeon graphics do trounce the integrated Intel graphics in the Windows Experience score of the R830.

Using the laptop for daily activities such as YouTube, Hulu, email, word processing, writing this review, the laptop was more than capable. In fact, using while sitting on your lap is a comfortable experience as its full size keyboard makes it easy on the wrists. One thing to note is that, like other laptops, this laptop does kick out a fair bit of heat, especially when using the Blu-ray drive. From a cold boot, the device took 27 seconds to reach a useable state.

As you would expect in a laptop with a 15.6 in display, battery life is less than thin and light models on the market. While using the laptop browsing the web, checking email and other various real world tasks, we were able to suck out 3.75 hours of battery life. While not exceptional, it hits the middle of the road for what we would expect out of a laptop in this mid range class. If you put the laptop into its Eco mode, you can muster out a little over 4 hours of battery life.

Much like every other PC on the market, this laptop comes with its share of bloat. Unless you find a need for the toolbars and security software, expect to spend about 30 minutes uninstalling all the software on the device. 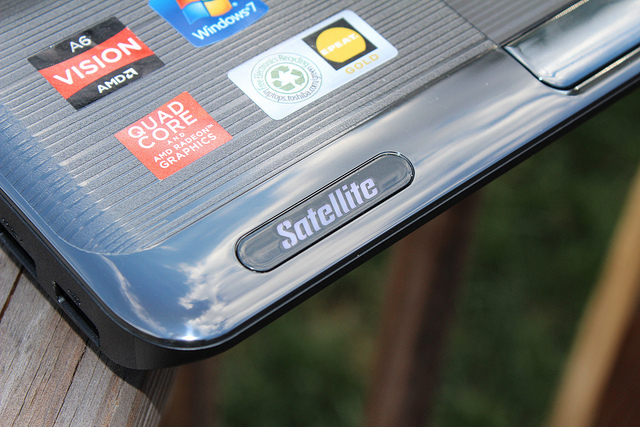 There are many other features that need mentioning. The webcam on the laptop is right in the middle of the road, neither exciting nor exceptional. All video calls worked as one would expect and did not present any barriers.

The addition of a Blu-ray player is a welcomed addition. To make it a writeable Blu-ray player makes it a fantastic addition for the price.  Playback was effortless but did drain the battery at a rather quick pace. Bring your charger along if you’re going to be using this as a portable movie studio.

Finally, media slot, USB ports 1 3.0 and 3 2.0, and HDMI out round out all the typical ports that you would expect for a laptop of this caliber.

When reviewing this laptop, we kept thinking about a lumberjack. A lumber jack may not have the latest tools or fancy gizmos, but it gets everything done in a way that is respectable and that’s how we feel about this laptop. It is big, bold, and full of bits that are not the highest end, but at the same time it isn’t priced be to be either.

Ringing up at $749 seems like a fair offer for this laptop. It comes up short in a few places like the resolution and trackpad but also gives back with the addition of a Blu-ray player.  But, at the end of the day, the P775d-S5266 keeps true to its form and is a viable alternative for the full sized laptop crowd for those who are looking to spend less than a grand on their next machine.