The HTC Trophy has finally made its way to Verizon. The phone, while not new to the market, is the first Windows Phone device for Verizon and gives consumers another choice on America’s largest CDMA network.

If you are looking for a ground breaking device with top end hardware, you may want to look elsewhere as this phone has been out on the market since late October. But just because it’s a bit dated, does not mean that it is a poor choice for a handset.

The phone in your hand feels like a solid little machine, unlike some HTC devices, there isn’t the standard flex in the casing when squeezed. While far short of feeling like the iPhones, dense as a brick, firmness, it doesn’t feel like a lower end device…primarily because it wasn’t designed that way. The non-slippery back makes it easy to hold and is less prone to scratches than metal or glass backed phones.

When using the phone it is standard affair. It seems like HTC has nailed down consistent call quality as the past several devices from the manufacture have all shown consistent volume and clarity when making a call. Users on the receiving end had no issue hearing our conversation. 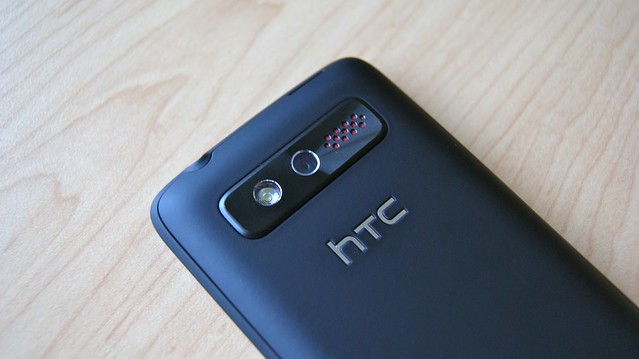 The camera is a relative joy to use compared to other devices on the market. The dedicated camera button that has the two stages (light press to focus, full press to take a photo) makes it feel like a standard point and shoot camera. Another well received point is that the lag between pushing the shutter button and the actual picture taking is minimal. Unlike some Android devices from HTC, shutter response time is quick, you will not miss a photo op with this device due to camera lag.

It’s not all roses when shooting with the camera/video camera, low light images tend to suffer. If you have the appropriate amount of light, images are beyond acceptable with minimal noise. Adding in the flash and low light, and the quality degrades rather sharply. As you can see in the image below, the colors on the Trophy do appear more washed out, this is a result of the low lighting issue, if the sun were shining, the issue would go away.

The device comes loaded with the HTC hub and if you are familiar with Sense, this is the Windows Phone version of that platform. It is a love hate relationship, either you will love the added features or you will consider them bloatware. As for new functionality, the HTC hub adds a bit of flair to the transitions but this also impacts the amount of time it takes to get the relevant data you are looking for. Thankfully, if you do not like it, simply unpin it from the landing screen .

The battery life, despite the 1300mAh battery, handles well in this device. I had no problem getting a day’s use out of it, even when using the web browser well beyond the average user. Like any smartphone, expect to charge the device each evening, but it is possible to get an 8 hour day or more with average use.

The speakerphone on the device is a bit of a mixed bag, at lower volumes it sounds adequate. But turning the device to higher levels it becomes distorted like a pair of cheap headphones and has a bit of the muffled overtones that other devices do not exhibit.

The 1Ghz CPU feels more than adequate. The phone felt smooth and never appeared to struggle when switching tasks. Likewise, the LCD faired well in most conditions but if you are out in direct sunlight, it was a bit hard to use the device. That isn't to say that its rendered useless, but reading text was a bit difficult.

The conclusion? For the price of $149.99, the device falls right into the midrange of products currently on the market and that is exactly where it should be. Using the device on a daily basis will be a pleasant experience for most but far from a perfect one too. The shortcomings on this device are noticeable but are not an inhibitor to using the phone. For the first Windows Phone device on Verizon at the price point given, its a worthy choice for the middle of the road crowd.