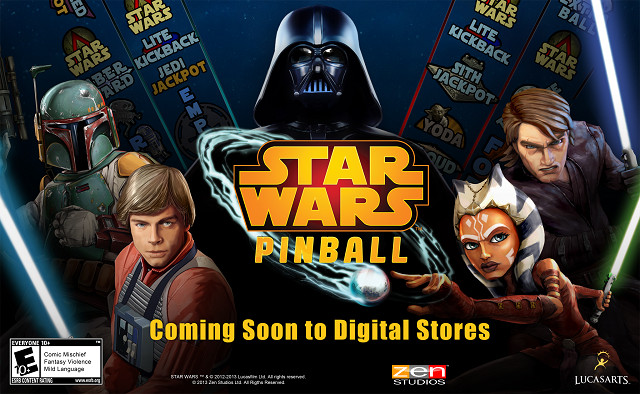 It’s no secret that I love pinball, and nobody does virtual pinball better than Zen Studios. As a child who grew up with the original Star Wars trilogy, I was really psyched when I heard that they were designing ten new tables based on the Star Wars universe. With the success of the Marvel tables, I had high hopes for these new entries. How do these first three tables (Episode V, Clone Wars, and Boba Fett) stack up?

After downloading the pack of three tables, I noticed an oddity on the main page. While the icons for sets of tables have always been next to each other in the past, this time the three Star Wars tables were scattered across the display. While this isn’t a big deal and obviously doesn’t impact gameplay at all, I was just a little surprised that each table was by itself on the screen.

The first thing I found a little odd was that there’s no mention of “The Empire Strikes Back” on the table itself. I expected to see it featured prominently, but it wasn't. This doesn’t impact gameplay at all, but was a curious omission. That said, all of the characters you'd expect to see are here, from Luke and Leia, to the ominous Darth Vader in the center of the play field. 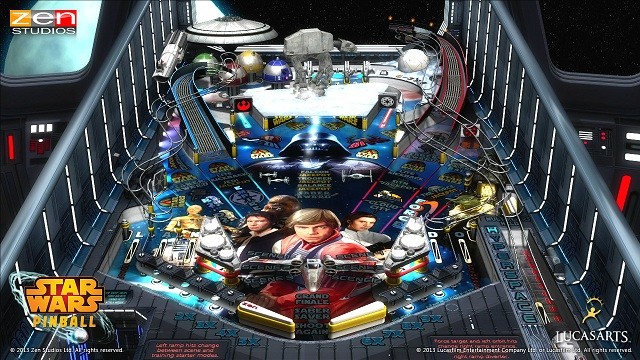 This table consists mainly of missions, and they’re fairly easy to activate – hit the center area enough times and a hole will open up in the middle of the table. Then simply drop the ball into that large opening, and you can select one of five missions (excluding the final battle, mission six, which isn’t accessible right away). Just because the missions are easy to activate does not mean they’re easy to complete though!

Each mission consists of multiple parts, and the nice part is that once you complete one phase, you can “continue” where you left off the next time you select that mission. That’s really helpful for some of the missions that have three parts to them as they can be quite challenging and it’d be really frustrating to drain your ball right at the end of part three of a mission.

All of the missions bring up nice looking 3D models and animations. For example, mission two has you first fight a Stormtrooper in the middle of the screen. Once defeated, he is replaced with an AT-AT that you have to take down by firing the ball through a loop around it’s legs. Darth Vader can even make an appearance.

Unfortunately, the animated characters also detract from pinball realism. With the Stormtrooper example, he’s frequently shooting at the table and if he hits your ball, it explodes. While you don’t lose the ball (a new one is launched), this took away from the pinball realism for me. Some fancy ball movements are one thing, but making a shot only to have the ball shot at and destroyed was a little annoying. The Jedi training minigame, where you have to block shots with a Lightsaber, also felt weak.

This was the table I was looking most forward to playing and, unfortunately, it ended up being the least fun of the bunch. It was still fun, but this table is definitely not for pinball purists.

What’s there to say about the best bounty hunter in the galaxy? 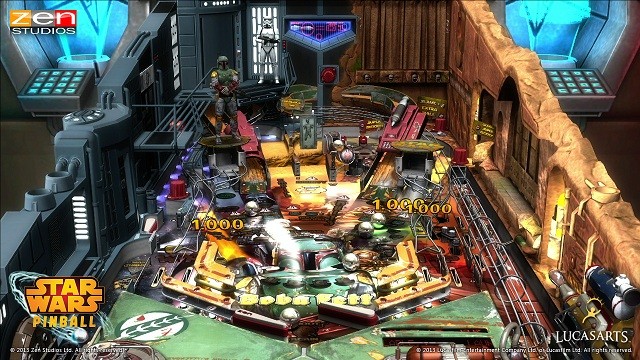 Boba Fett and his iconic armor are well rendered and animated on this table and, unlike the episode V table, this does not distract from gameplay at all. Sure, he does occasionally interact with the table – like using a grapple to save the ball from draining down the middle – but it feels organic and not at all distracting. The table also has an animated Sarlacc pit with tentacles moving in the air.

Gameplay here focuses on collecting bounties for both the Empire and for the Hutt family. Activating Empire missions is straight forward: Hit the Empire ramp several times in a row and Darth Vader comes on the table, offering Boba Fett a job. Hit the ramp once more and you get to choose which bounty to take. Obtaining a job for the Hutt’s consists of hitting the ball on the see-saw hard enough to tip it up and expose a hole, then hitting that hole several times to make Jabba come out of the upper-right hand corner of the table.

Skillshots are handled in an interesting manner as well. Where most tables give you points for hitting it, Boba Fett gives you a base 200,000 points followed by a slot-machine like spinner. By using the launch button, you can get other bonuses. The more you pull the plunger down, the faster the spinners go making aiming them nearly impossible, but increasing the value of the targets.

Of the three, this table was by far the most difficult. Aside from the main flippers, the only other flipper is on the left hand side, near the bottom. If you’re not careful, it’s easy to use that flipper to shoot the ball down the right drain lane, something I did frequently. It was hard to tell when I should use that flipper, what to aim for, or when not using it would cause the ball to drain through the left lane. This is something practice will probably improve.

I’ll admit I didn’t have high hopes for this table. As a fan of the original trilogy, the new trilogy soured me on the franchise. I’m happy to say I was wrong, as Clone Wars turned out to be a great addition. 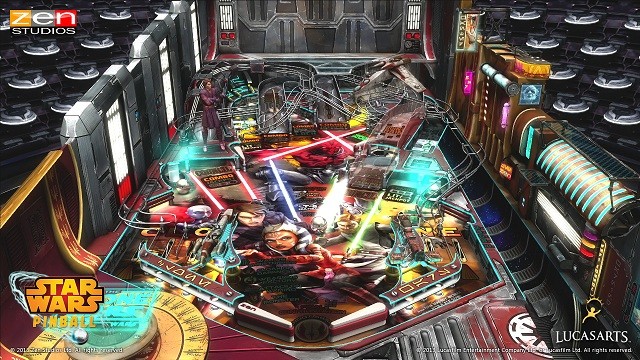 This table was still a lot of fun. Where the other two tables focused on missions and targets, the name of the game is ramps for this table. The whole table is littered with them and the number of targets and spinners is relatively low. In that regard, it reminded me of the Iron Man table.

The ball launch is a little weird. Instead of launching a ball, you launch a ship of some sort. That ship explodes and the ball then starts playing on the table. This may have some significance within the Clone Wars universe that I'm not aware of, but I found it distracting and not very pinball-like. 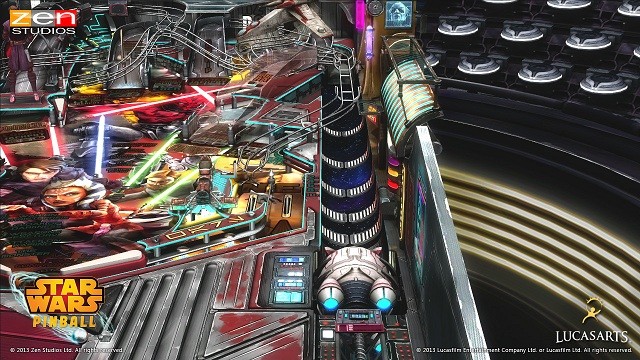 Missions are much more difficult to activate, and completing them is also a challenge. One, for example, brings a force field around the middle of the play area. In order to hit the targets, you have to hit a ramp on the left of the playfield and then use the flippers towards the top to keep the ball in play and hit the proper ramps. If you time things right, you can play the game in this upper portion of the playfield for quite a long time, passing the ball between the flippers or hitting one ramp that sends the ball to the other flipper.

That said, I didn’t recognize most of the characters. Aside from Yoda giving words of wisdom throughout the game, I didn’t connect with it at all. Fans of the new trilogy (or the Clone Wars cartoon) will probably love this table. I enjoyed it from a pinball perspective, but it just didn't feel like Star Wars to this old timer.

As we’ve come to expect, the graphics and sound effects of all three tables is amazing. Many sound clips are taken right from the movies, and that adds to the immersion factor. The 3D modeling and animations are spot on and look great. 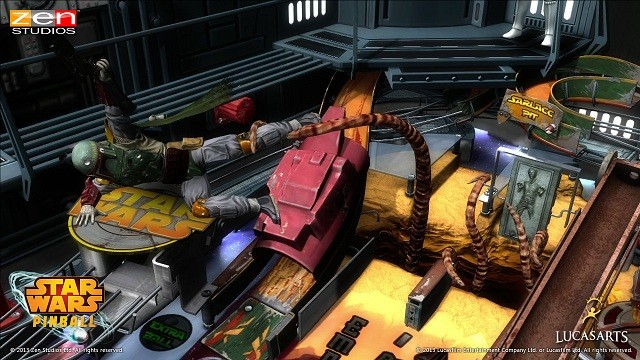 One concern, however, is that Zen Studios is starting to feature these models more and more. In Boba Fett, for example, once the game is over you have to wait for him to fly to the middle of the table, then fly up and off screen before you can start over. We like the graphics, but hope that they don’t start taking over the core of the pinball game itself.

This three-pack is also very challenging. Some may consider that a benefit (especially compared to easier tables like Sorcerer’s Lair), whereas some may not like the advanced difficulty. Personally I’d rather the table be difficult rather than easy, as long as the difficulty isn’t due to poor design.

As I’m sitting here listening to The Who while wearing my “Pinball Wizard” t-shirt, I’m wondering how to rate the latest trio of Star Wars tables. They’re definitely fun and exciting and are worthy entries into the Pinball FX2 stable of tables. However, aside from my love of Star Wars, they’re not as engaging as some of the Marvel tables the company has released. In addition, as mentioned above, I’m starting to see animations and voiceovers taking a more prominent role in the games, and hope this trend doesn’t continue.

So are they worth your $10 (or 800 MS points)? I’d give it a resounding “yes,” with one caveat. If you’re more of a pinball fan than a Star Wars fan, or if you prefer super heroes, you might be better served buying one of the Marvel packs instead (either the original four, the Avengers pack, or the Vengeance and Virtue pack). If you already have the Marvel tables, or are a huge Star Wars fan, then don’t hesitate to purchase this three-pack. And remember that Zen Studios still has another seven tables in the works for the future!

This Star Wars pinball pack is available tomorrow on XBLA, PSN (for PS3 and PS Vita as Cross-buy entitled content), the Mac App Store, the Apple App Store, and Google Play. No official word on when the Windows 8 version will be released, but the rumor is that we may hear something official this week.

UPDATE: I just received word from Zen Studios that Star Wars pinball will indeed be released as a DLC for Pinball FX2 on Windows 8 starting tomorrow (2/27). It sounds like the Microsoft review process came in just under the wire! If you try it on Windows 8, let us know what you think!