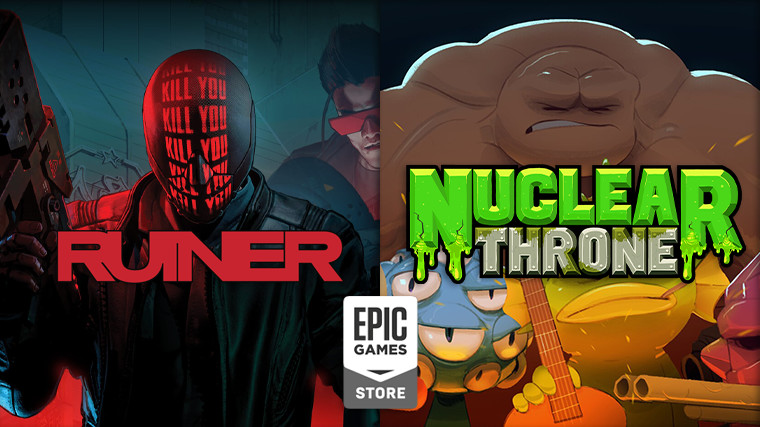 Epic Games Store has put on offer RUINER and Nuclear Throne to claim for free this week, replacing SOMA and Costume Quest.

RUINER is an isometric action title set in the cyberpunk future of 2091, developed by Reikon Games, a studio founded by industry veterans who previously worked on the Dead Island and Witcher series. A face-paced slasher shooter, the game also features some minor RPG elements. It was received positively by critics and players alike at launch. Here’s how the Epic Games Store describes the title:

RUINER is a brutal action shooter set in the year 2091 in the cyber metropolis Rengkok. A wired psychopath lashes out against a corrupt system to uncover the truth and retrieve his kidnapped brother under the guidance of a secretive hacker friend.

Nuclear Throne is a top-down rogue-like shooter by Vlambeer, the studio behind games such as Luftrausers. Set in a post-apocalyptic world, the game challenges players to fight through a wasteland ravaged by mutants and monsters. Along with the singleplayer mode, the game also features local coop. It was received positively by critics and players alike at launch. Here’s how the Epic Games Store describes the title:

Nuclear Throne is a post-apocalyptic roguelike-like top-down shooter. Not 'the final hope of humanity' post-apocalyptic, but 'humanity is extinct and mutants and monsters now roam the world' post-apocalyptic. Fight your way through the wastelands with powerful weaponry, collecting radiation to mutate some new limbs and abilities. All these things and more you could do if only you were good at this game. Can you reach the Nuclear Throne?

Epic Games Store is offering RUINER for Windows, and Nuclear Throne for Windows and macOS, at no cost to players. It’s worth noting, however, that both are also available for Linux via Steam, where they are priced $19.99 and $11.99, respectively, at the time of writing. Here are the minimum requirements for the games:

If you wish to claim RUINER or Nuclear Throne, you can find them here. They will be free to claim until November 14, which is when Epic will put on offer The Messenger for its next giveaway.