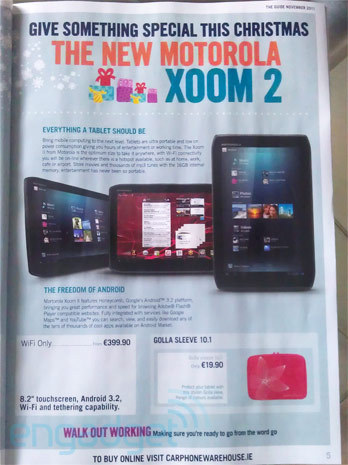 Today is November 1 and while many believe that the holiday shopping season is supposed to start after Thanksgiving, the rest of us know that it has already begun. Witness a newly leaked ad that appeared over at Engadget that showed European retailer Carphone Warehouse is planning to sell Motorola's still unannounced Xoom 2 tablet in time for Christmas.

The ad claims that the WiFi only tablet will be sold for 399.90 euros and will come with 16 GB of storage, an 8.2 inch touch screen and Android 3.2 "Honeycomb" as the OS. The original Xoom was launched earlier in 2011 but so far Motorola hasn't apparently had much luck in getting people to purchase it. Indeed, the company recently admitted that it only shipped 100,000 Motorola Xoom units (shipped, not sold) in the third quarter of 2011.

Quite frankly, we are skeptical that Motorola will be able to continue the Xoom tablet line with those kinds of low shipment numbers. What we have seen of the Xoom 2 doesn't give us much hope that this next generation version of the tablet is going to be much different than the current version, especially since it won't be running Google's Android 4.0 (Ice Cream Sandwich) operating system.

Unless there is something in the hardware that we are not aware of, this version of the Xoom 2 seems to be a case of the same old, same old. If that is what the Xoom 2 turns out to be, Motorola might as well shut it down right now and cut its losses.