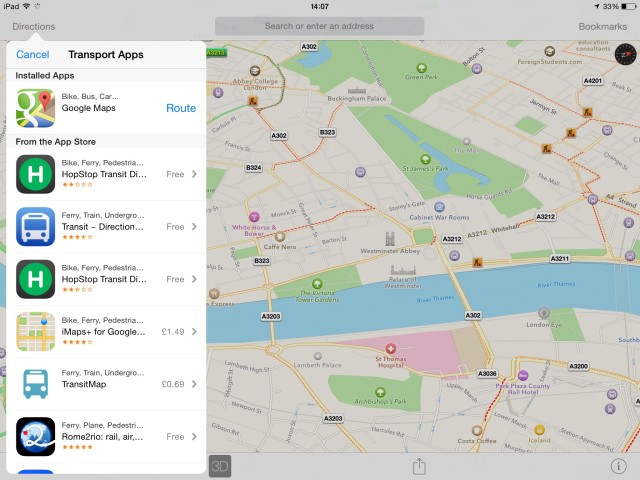 Since the troubled launch of Apple Maps in iOS 6, iPhone and iPad users have complained of poor data and a lack of features such as transit directions. Google Maps continues to be ranked highly in the App Store chart as it seems to offer a far stronger service than Apple's counterpart. However, things may be changing, as a new report reveals that iOS 8 will drastically improve the app.

In a scoop from 9to5Mac, it has been suggested that recent acquisitions of firms such as BroadMap, Embark and HopStop will power more accurate data in a new version of Apple Maps. Not only will there be more point of interest markers, which hopefully will be in the right places, but the cartography will be improved to ensure efficient navigation.

To get public transport information and directions on iOS now, a third party app is needed, as Apple Maps simply redirects users to the app store if they request transit information, but iOS 8 may change this. Sources say that transit mapping will be available in many major cities at launch and will pinpoint tube stations and bus stops similarly to how the old Google Maps app did. Users will allegedly be able to base their searches on a set time and date to make use of Apple's new timetable data.

Finally, Apple seem to be working on some form of augmented reality feature to highlight points of interest. 9to5Mac's sources point out that this may not surface in iOS 8, giving a more vague time frame of "the coming years." The feature will likely be similar to Layar's apps, which have offered the functionality for some time.

The launch of Apple maps in 2012 ultimately led to iOS head Scott Forstall leaving Apple in what was then described as a power struggle. Tim Cook, Apple's CEO, even published an open apology over the state of the application, which has improved over time, but still remains inconsistent internationally. With iOS 7.1 now available to the public, it is likely the company are in full swing working to ensure iOS 8 lives up to the high standards of their customers. The update will likely be announced at Apple's WWDC, in June.