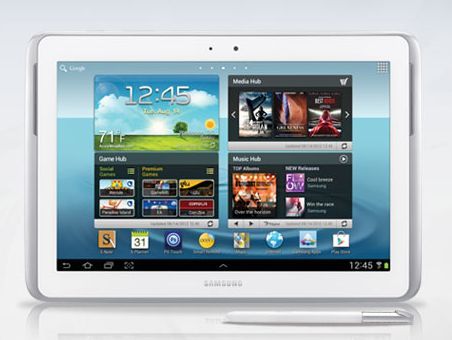 Samsung is going to try to launch yet another tablet line after seeing somewhat limited sales of its Galaxy Tab franchise. Today, the company announced that its previously revealed Galaxy Note 10.1 tablet will finally go on sale in the US on Thursday in a number of retail locations and websites.

The company revealed the details during a press conference today, which was livestreamed on their website. Samsung said that the 16 GB version of the Galaxy Note 10.1 will be priced at $499, with the 32 GB version priced at $549. The 10.1 inch display has a resolution of 1,280x800.

Both versions of the tablet contain Samsung's in-house Exynos 1.4 GHz quad-core processor along with 2 GB of RAM, a five megapixel rear camera along with a front facing camera. It runs on Android 4.0 (Ice Cream Sandwich) but Samsung has plans to upgrade it to the new Android 4.1 OS (Jelly Bean) later this year. It also comes with its own S-Pen stylus.

The first versions of the Galaxy Note 10.1 will be WiFi only, but there are plans to launch new versions with WiFi and LTE wireless support at some point.