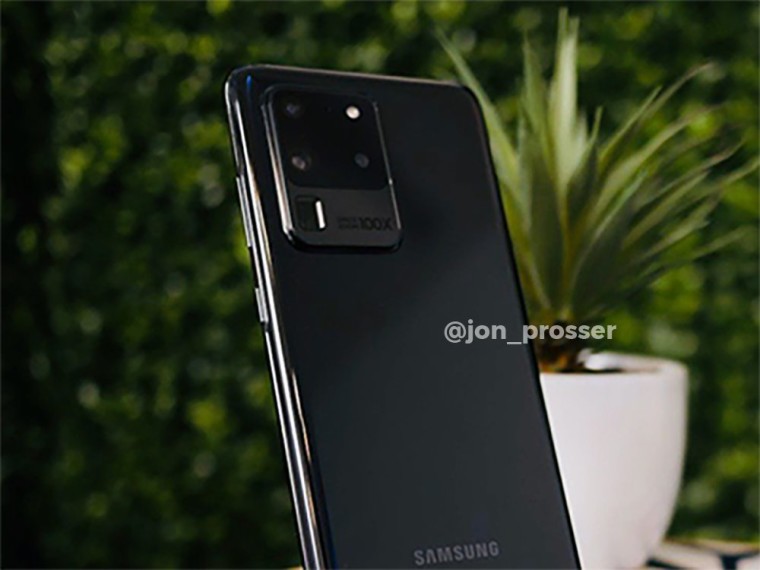 The Samsung Galaxy S20 series has already leaked in renders and press photos. Now, real-life photos of the Galaxy S20 Ultra courtesy of @jon_prosser have made their way online showing the massive camera hump at the rear.

The photos only show the device from the rear and while they are of relatively low resolution, they do a good job of showing the massive camera hump which houses four different camera sensors along with an LED flash. The photo also shows the camera hump having a 100X Space Zoom moniker to highlight the zoom prowess of the device.

The Galaxy S20 Ultra is rumored to come with a 108MP camera that will allow it to record videos in 8K resolution as well as offer 100X digital zoom. The camera hump on the Galaxy S20 Ultra is so massive that it makes the quad-camera setupray of the S20 Plus look small in comparison. The latter will miss out on the 100X Space Zoom feature as it will only have a 64MP camera instead of a 108MP one like on the Ultra variant.

Samsung is all set to announce the Galaxy S20 series alongside the Galaxy Z Flip and the Galaxy Buds+ at its Unpacked event on February 11. The company intends to launch its flagship handset in three different variants and in 4G and 5G flavors. The detailed pricing and specs of the Galaxy S20 lineup have also been leaked. If you want to know more about the Galaxy S20, make sure to read our rumor roundup.