The Samsung Galaxy Note 5 was one of the best phones - and possibly the best Android phone - of 2015. Samsung's array of four flagship devices used the firm's own Exynos 7420 chip, making it stand out above disappointing offerings from Qualcomm.

While this year's flagship offering, the Galaxy S7, looks the same on the outside, the internals are completely different. The firm used both Snapdragon 820 and its new Exynos 8890, with different models scattered throughout different markets. The camera has been overhauled as well.

With that being said, it seemed important to compare the two devices, answering the question of whether Samsung's new camera is better than the old one, or if Snapdragon 820 really is as impressive as last year's Exynos 7420.

Also, note that for the purposes of this comparison, the Galaxy Note 5 (like the Galaxy S7) is running Android Marshmallow. Some devices haven't received Android 6.0 just yet, but I thought that a more fair comparison would be one where they're both running the same software. 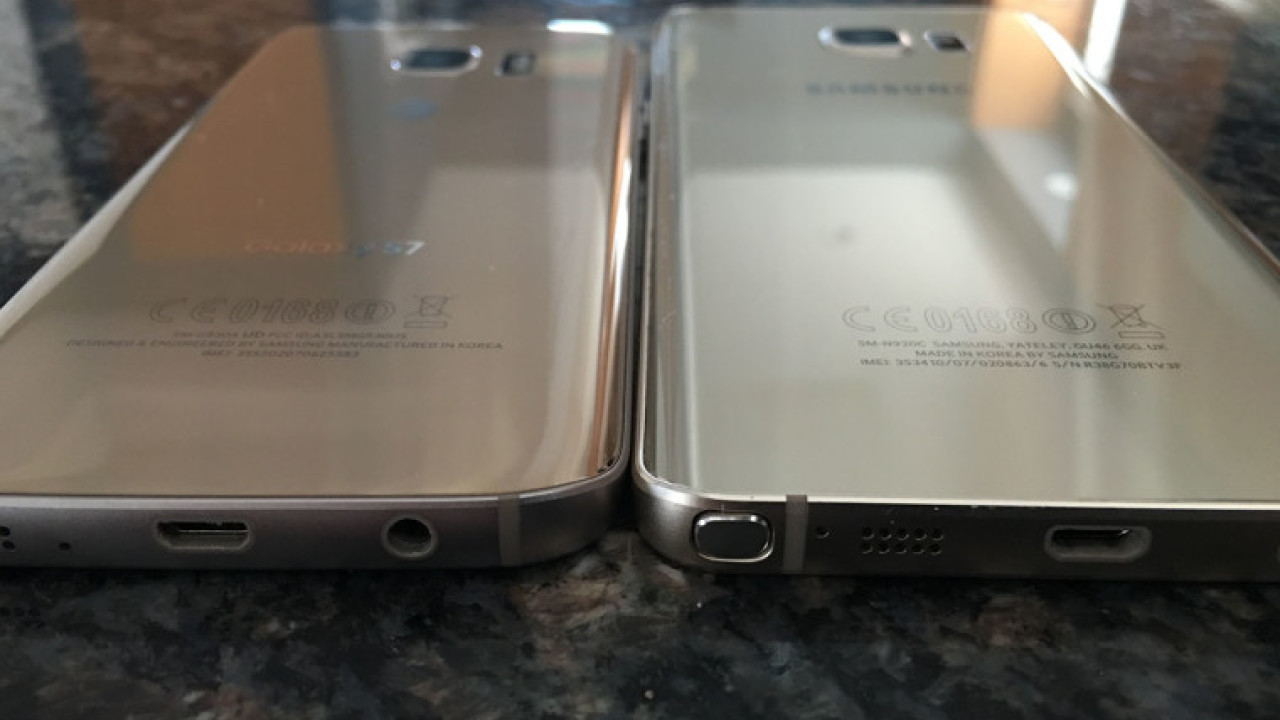 Samsung launched its new mirrored all-glass design with the Galaxy S6 and the firm has stuck with that ever since; however, the Galaxy S7 doesn't take after the S6 in design. It takes after the Galaxy Note 5. In fact, the two devices have the exact same body.

For the first week that I had the Galaxy S7, it felt absolutely tiny to me. It's not because the device is actually tiny. I have tons of phones that are the same size - if not smaller - and don't feel small at all. This device felt so small because I had been using the Galaxy Note 5 since August and as far as design goes, the S7 is a miniaturized Note 5.

The two displays are equal in their awesome quality as well, their only difference being in their respective sizes. The fact that Samsung makes phenomenal AMOLED displays is no secret. That's why they're called Super. 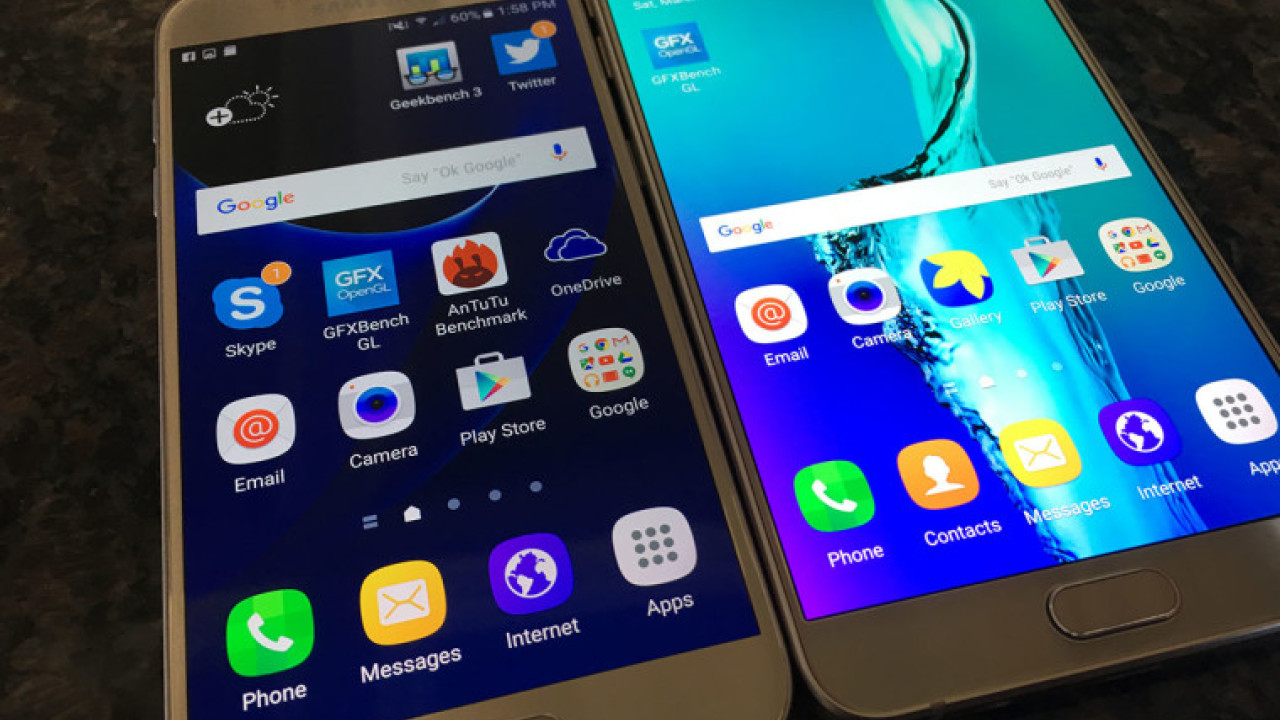 Since the Galaxy S7 is a bit smaller but has the same 1440p resolution, this results in a higher pixel density. Personally, I don't think anyone will assume that it has better quality because of this; however, if you are one to use a VR solution - such as a Samsung Gear VR or Google Cardboard - you may very well see the difference.

Another key difference in the display is that the Galaxy S7 now offers an Always On Display. While the feature can be turned off, always on means just that. It does not turn off (it does dim) when the device is placed in the user's pocket or when sitting on a table, like most phones with some sort of ambient display do. 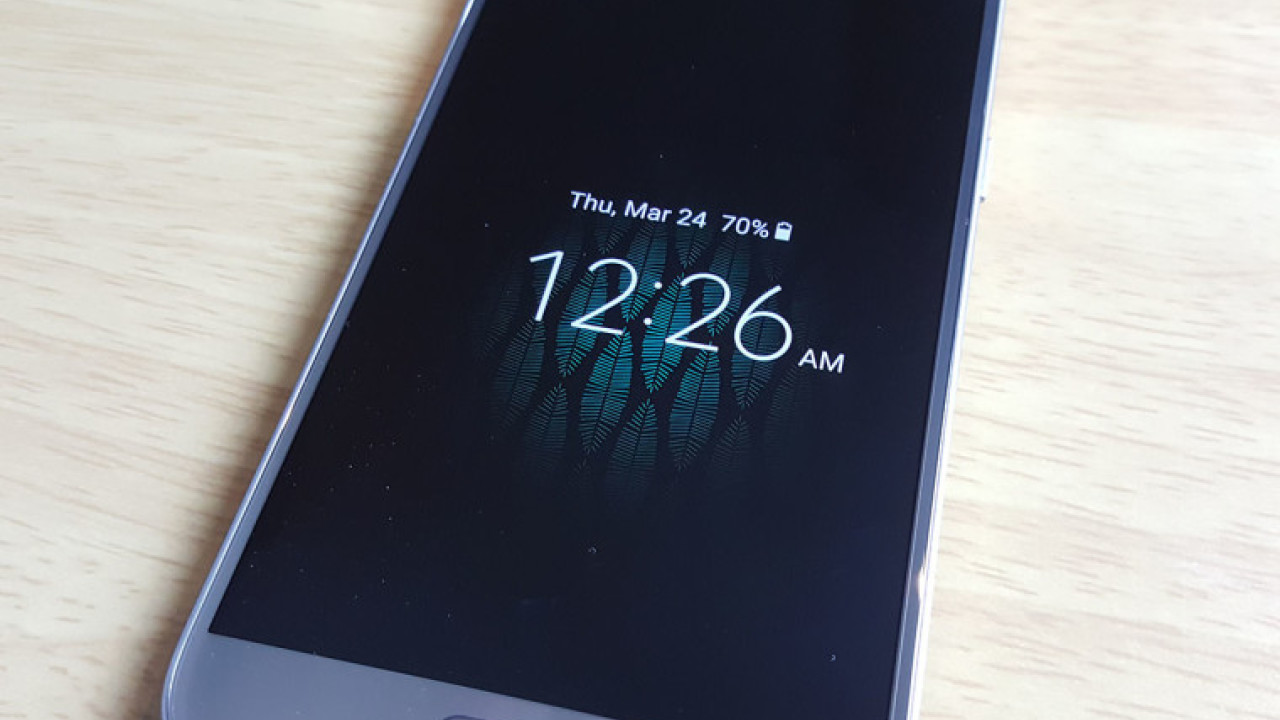 Samsung really made a big deal about the camera when they announced the Galaxy S7. They noted that it uses 100% focus pixels while the iPhone 6S uses a lowly 5%; however, when we compared those two devices, we found that the iPhone 6S Plus still focuses faster.

I've been looking forward to comparing these two cameras because in both the comparison mentioned above and the camera comparison with the Microsoft Lumia 950, it seemed that the images taken with the Galaxy S7 are significantly less saturated than the cameras it was competing against, a characteristic that I've never seen from Samsung devices before. Typically, the Samsung device is more saturated.

There are significant differences in the hardware for these two devices. For one thing, the Galaxy S7 has a lower resolution than the 16 MP camera on the Galaxy Note 5, coming in at 12 MP. While many are sure to look at that spec and assume that it means the Note 5 has the better camera, it does not.

Resolution simply means the dots that make up the image. Your display is made up of dots as well; however, it's going to b a smaller amount of those dots than the photos taken with either of these cameras. A 4K display is 8.3 million pixels (or megapixels), although that's at a 16:9 aspect ratio. If you're taking your pictures at 4:3, that number shrinks to 6.2 million. Any photo larger than that needs to be scaled down. To provide a little more perspective, a 1080p is only around 2.1 million pixels at 16:9.

Most smart phone cameras obtain their maximum resolution at a 4:3 aspect ratio, and even if it's not, that's how I always recommend taking pictures, for reasons that are beyond the scope of this article. What is relevant here is that Samsung has historically been the exception to this rule, forcing users to use 16:9 if they wish to obtain the maximum resolution.

As far as software goes, obviously both phones use the same Camera app, which has just about every feature that a user could want, as well as some they do not. It also offers downloadable plug-ins, such as the ability to record an animated GIF, a much more easily sharable alternative to Apple's Live Photos or Microsoft's Living Images.

Of course, when it comes to smart phone cameras, talk is cheap. Let's look at some samples.

There are a few things that we can note from these photos:

Since Samsung made such a big deal about how much faster the Galaxy S7 focuses, let's put that to the test.

After reviewing the video, it appears that the Galaxy S7 and Note 5 focus at about the same speed.

While both of these front cameras come in at 5 MP, Samsung seems to be sticking to a trend of using the same aperture in the front cameras as the rear, so the Galaxy S7 is f/1.7 and the Note 5 is f/1.9.

The Galaxy S7 also adds a flash to the camera by lighting up the display, a trend that we've seen now from Motorola, LG, and more recently, Apple. Like Apple, Samsung chose not to implement the feature in older models, so it's not available on the Note 5.

Well, there's clearly one big difference between the two cameras. One of them obviously reverses the image, a feature not uncommon in front cameras.

It would appear that the Galaxy S7 has the better front camera at night, even without the flash.

Other Note-able features that might give one the edge

Whenever comparing two devices, there are always pros and cons to each. Being that all users have different priorities, a single feature in one handset might make everything else irrelevant.

Of course, the hallmark of the Galaxy Note 5 is a remarkable little feature called the S Pen. This is actually what attracted me to the device in the first place. Users can pop out the Pen while the device is asleep and immediately begin writing down notes, similar in a way to how the Surface Pro 3 introduced a feature that allowed the user to push the top of the Pen to open OneNote.

Of course, that's not all. If the user pops out the S Pen when the device is awake, a menu opens, offering three completely customizable shortcuts as well as other options, such as taking a screenshot and writing on it, or capturing a portion of the screen and doing the same.

Both of the two listed features can be incredibly important to a user; however, if you want both, you'll likely have to wait for the Galaxy Note 6 this Summer.

Every time I write a review or comparison, I state that I don't believe in benchmarks because they rarely reflect real world usage of a device and that I provide them strictly because people want to see them. You're about to see why.

First up is AnTuTu Benchmark, one of the most popular benchmarking tools that exist. AnTuTu recently redesigned its app, also changing the way that it scores devices. With the former AnTuTu Benchmark app, the Galaxy Note 5 was a clear winner over the iPhone 6S Plus. That all changes with the new one, where the iPhone climbs ahead by quite a wide margin.

Also, note that for this section, I've used one of the new features found in the TouchWiz flavor of Android Marshmallow called "Capture more". This allows the user to take a screenshot and then tap a button to scroll down the page and add to the image. Because of that, some of these benchmarking screenshots will be rather large. 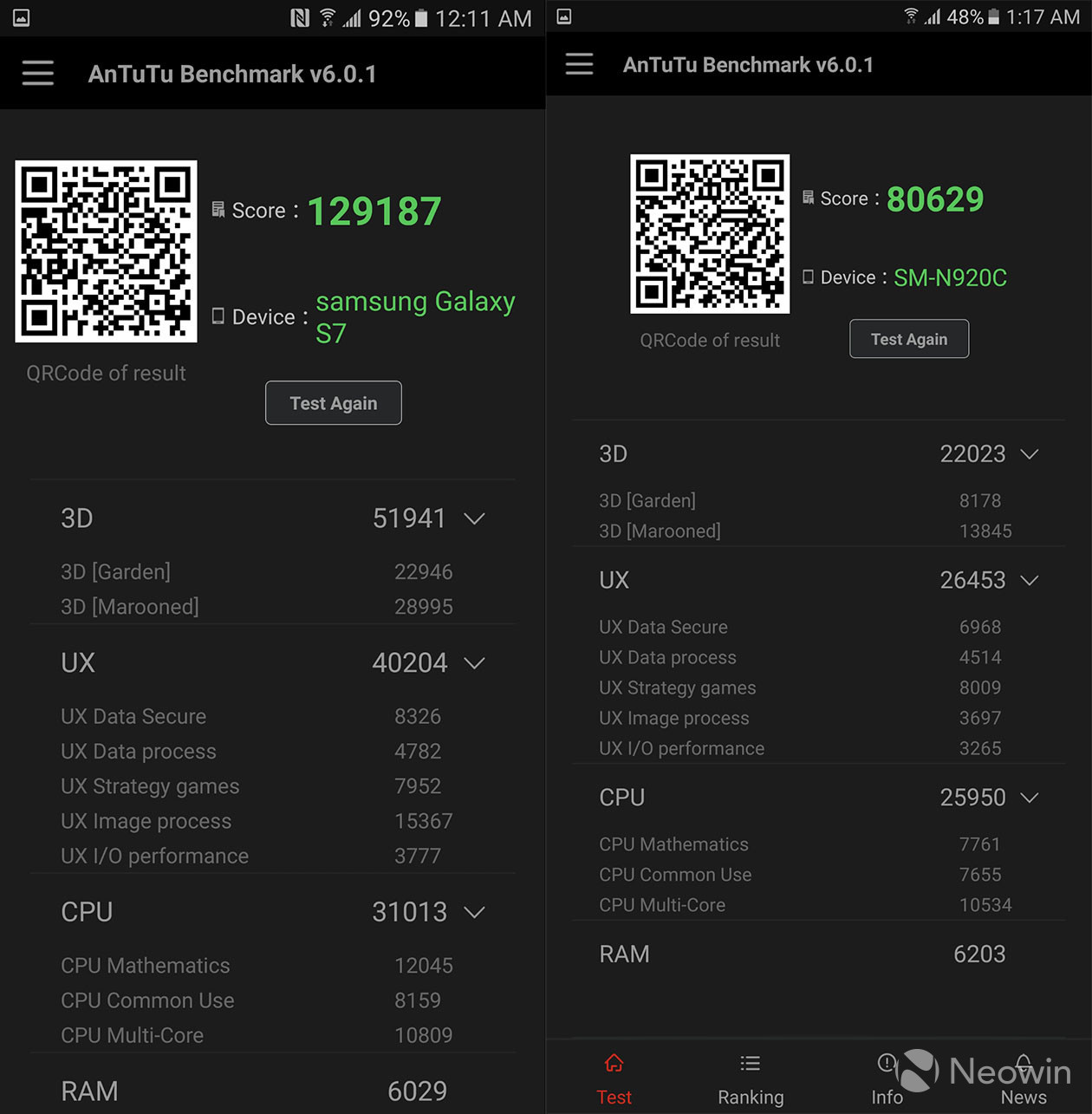 According to the test, the Galaxy S7 wins in every category except RAM. Just keep in mind that when we compared the S7 to the iPhone 6S Plus, the iPhone won in this test; however, the Note 5 beat the iPhone in the old AnTuTu app.

Next up is GFXBench 4, a benchmarking tool that is renowned for testing the GPU. This is actually an important test on devices with 1440p displays, especially if you're into playing games. 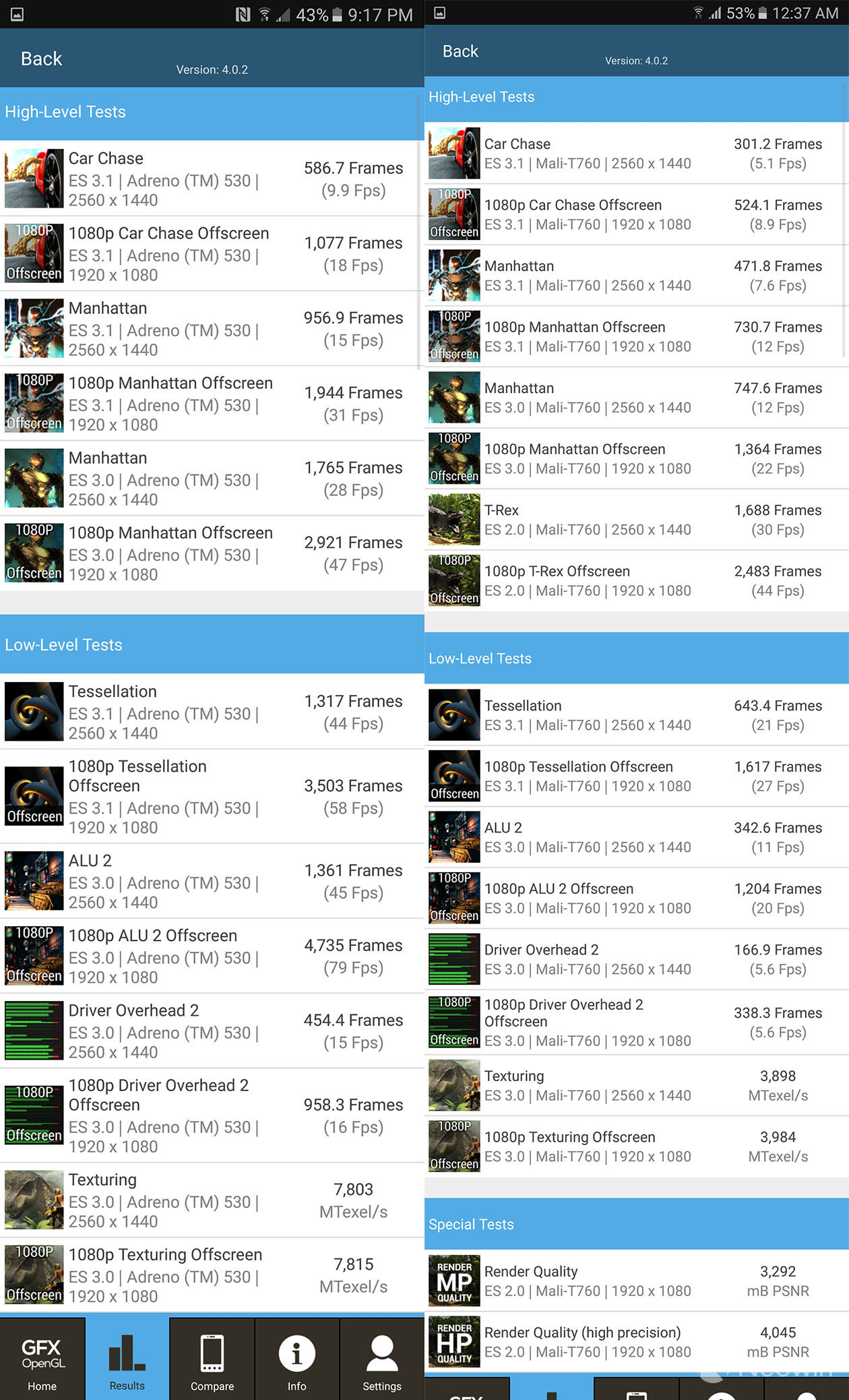 As we can see, the Galaxy S7 wins in every area. This is a refreshing result, as last year's Adreno 418 and 430 GPUs weren't impressive when paired with a 1440p display. It would appear that technology has finally caught up with the displays that OEMs want to use.

Finally, we have Geekbench 3. Remember when I said that some of these screenshots are going to be really long? Well, I was referring to this one. Feel free to skip over the majority of it if you're not interested.

The benchmark scores can vary greatly. I have another that shows the Galaxy S7 coming in at about 3,800 in multi-core and one where the Note 5 comes in at around 4,000. It all depends on the temperature of the device and background processes that may be running.

After mediocre showings from Qualcomm in the Snapdragon 808 and 810, it's really refreshing to see the firm once again creating a flagship offering that's worth our respect. 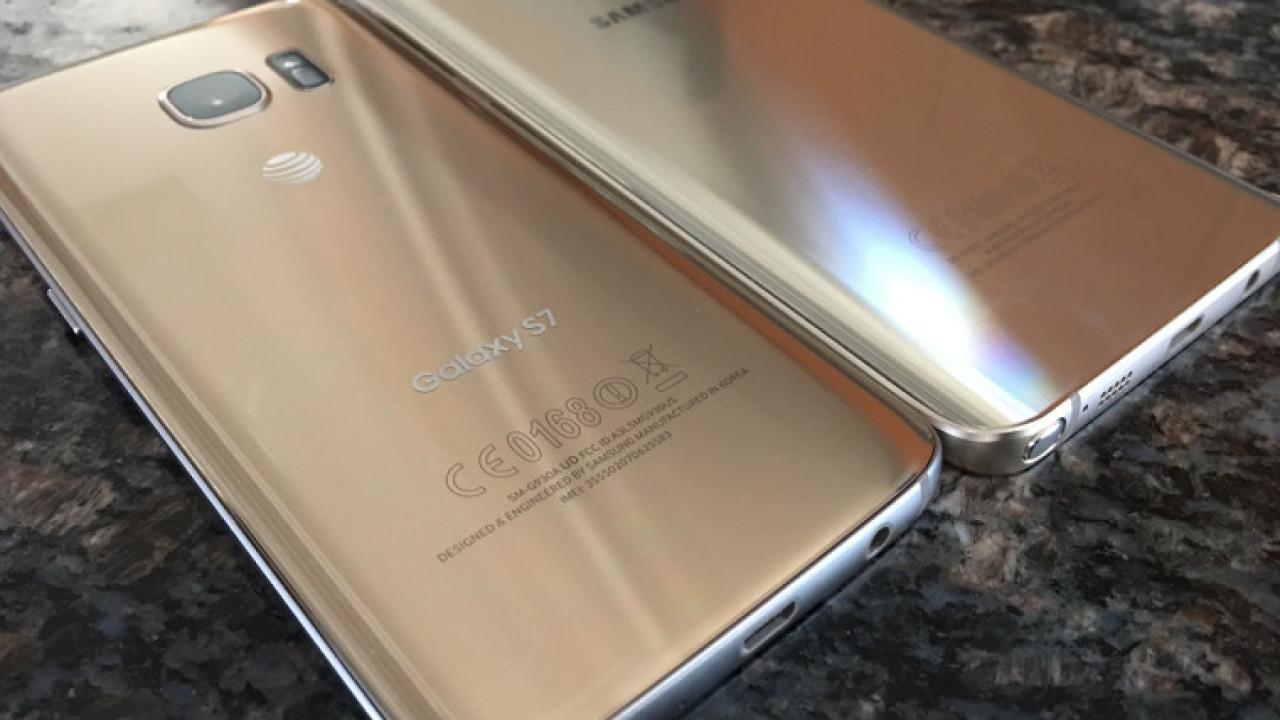 Objectively speaking, the Galaxy S7 is the better device. It has better front and rear cameras, expandable storage, and the performance to finally make a savvy buyer comfortable with a QHD display.

Then again, if you're like me, you really want that S Pen. The ability to take notes without waking the phone was a game changer for me, although it is somewhat hindered by the fact that those notes won't easily integrate with OneNote.

All users have different priorities, so for those people, the S Pen might be enough to give the Note 5 the edge here (can't stop, won't stop) and it might be a better idea to wait until Samsung launches the second half of its array of flagship devices later this year. For the rest of the Samsung fans, the Galaxy S7 is clearly the better choice.