Samsung is just days away from holding its Unpacked virtual event where it is expected to unveil a whole host of devices. While details of a lot of the offerings have leaked already, the news cycle is still going on. The South Korean company is expected to unveil the Note20 flagship duo, and a new Geekbench benchmark listing (spotted by Twitter user Abhishek Yadav) shines a light on the processor specifications of the top-tier Note20 Ultra.

The benchmarks reveal that the device sporting model number SM-N986N – supposedly the South Korean version of the Note20 Ultra – packs a Snapdragon processor. For reference, last year’s Galaxy Note10+ variant for that country carried the ‘SM-N975N’ model number. If accurate, this would be the second consecutive time that the firm will be opting for Qualcomm’s chip instead of its own Exynos processor. 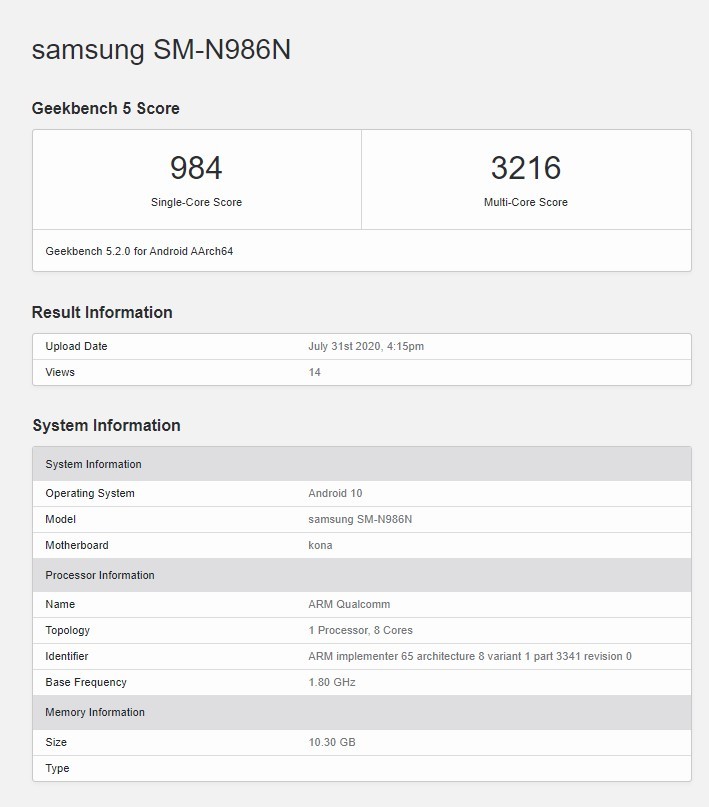 Reports suggest that all the company’s mid-year flagships will be powered by the Snapdragon 865+ SoC. The Galaxy Z Flip 5G debuted with that chip earlier this month, so it will not be surprising to see some versions of the Note20 sporting Qualcomm’s latest flagship SoC.

The Exynos 990 has been criticized to be inferior in performance and endurance in comparison to the Snapdragon 865. Samsung’s choice to pack the S20 with a Qualcomm chip reportedly “humiliated” its Exynos division. Even fans were unhappy, as online petitions calling for the company to drop Exynos processors from its devices gathered more than 44,000 signatures. The company sells the Exynos variant in Europe and some Asian markets.

Rumors from earlier in the year hinted that the company could be developing an updated, Exynos 992 chip for use in its Note series flagships. However, the firm has not yet announced such a chip. Additionally, a Geekbench listing from yesterday of a variant of the Note20 Ultra running an Exynos 990 chip was spotted, all but confirming the existence of that SoC in variants of the Note20.

Some reports suggest that the Exynos variant will be an optimized version over what is present in the S20 line. It will be interesting to see if that is true and if Samsung addresses users’ concerns about the increasing divide between the performance delta in variants of the same device.