We have been hearing about the benefits of graphene as this miracle material for years now and while there have been promising developments in labs, actual products sporting the newfangled tech are few and far between. Now, we might finally see a realisation of graphene's potential, at least in battery tech.

Prolific leaker Evan Blass is reporting that Samsung will have a phone with a graphene battery within a year or two. The battery will reportedly be able to charge to 100% in less than half an hour, though the company is still working to increase capacities while struggling with making the end product cost-effective enough to mass-produce. 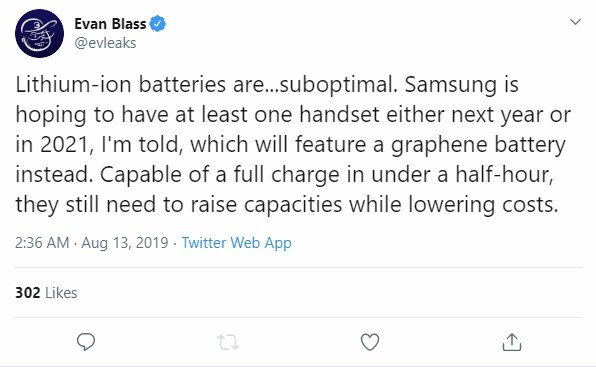 Of course, it's no surprise that Samsung is doing this. The company has been experimenting with graphene batteries for years. In 2015, it was able to form batteries with twice the capacity of lithium batteries by amalgamating graphene and silicon and, in 2017, showcased battery tech using the same material that allowed for a 45% increase in capacity alongside a fivefold improvement in charging speeds compared to a lithium-ion counterpart.