Last week we reported on the unpopular move made by Samsung to region-lock the Galaxy Note 3, and since then Samsung have attempted to clarify the move with even more confusing statements to the press and customers on the issue.

One Samsung official said that if the Note was activated "the right way" in the region it was purchased, then sim cards from other regions could be used in the device; which just leaves us wondering what purpose a region lock serves at all. However in practice this doesn't seem to be the case; users on XDA have been complaining that even though the European model was activated correctly, the Note 3 would not accept cards from other regions such as Africa or Asia, which has resulted in anger from customers and some scathing reviews on Amazon UK.

Another rep also told a customer over the phone that the European Galaxy Note 3 handsets are only meant to work in that region, and once Android 4.4 KitKat arrives the regional lock will be extended to some older Galaxy devices that include the Note 2 and Galaxy S3, even if they are over a year old. However, if the varying statements made by Samsung are anything to go by, things could change by the time Android 4.4 comes around - one would at least hope.

Galaxy S4 units sold in Europe and Latin America have also been shipping with the same sticker that warns that the device can only be used with sim cards in that region. 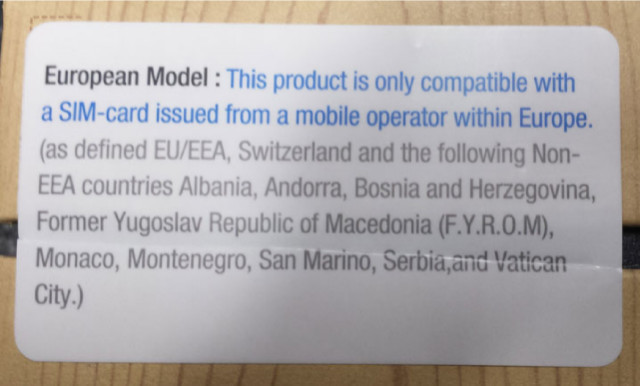 Samsung has defended the move by stating that the practice will help stop the illegal import of their devices in certain countries, but if their earlier claim is true in that people can still activate in the region it was purchased, and then be able to use a sim card in another region, this doesn't seem to align with their claims that they need this to stop the illegal imports.

All this serves to do is anger customers, create a situation where Samsung owners are forced to accept the higher roaming charges, and possibly even deter those customers from buying another Samsung handset in the future.

Backpedaling on older devices is also something that won't go down well with owners; is Samsung really that worried about illegal imports of the older Galaxy S3, or is something else at play here?