Samsung might be developing a version of the Galaxy A51 5G for Verizon that supports the Ultra-Wideband mmWave 5G standard. A benchmark listing on Geekbench carrying model number SM-A516V was spotted by RootMyGalaxy (via GSMArena) running an octa-core processor with a motherboard codenamed ‘lito’, which is expected to be a Snapdragon 765G SoC (system-on-chip). The said phone sports 6GB of RAM.

A Verizon variant of the Galaxy A71 5G is expected to be launched later this summer. Reports suggest that that device bearing model number SM-A716V will be branded the A71s 5G UW, with ‘UW’ standing for the faster ultra-wideband mmWave network, in line with the carrier’s nomenclature of its 5G handsets. Therefore, it is possible that the A51 variant will be called the A51s 5G UW. 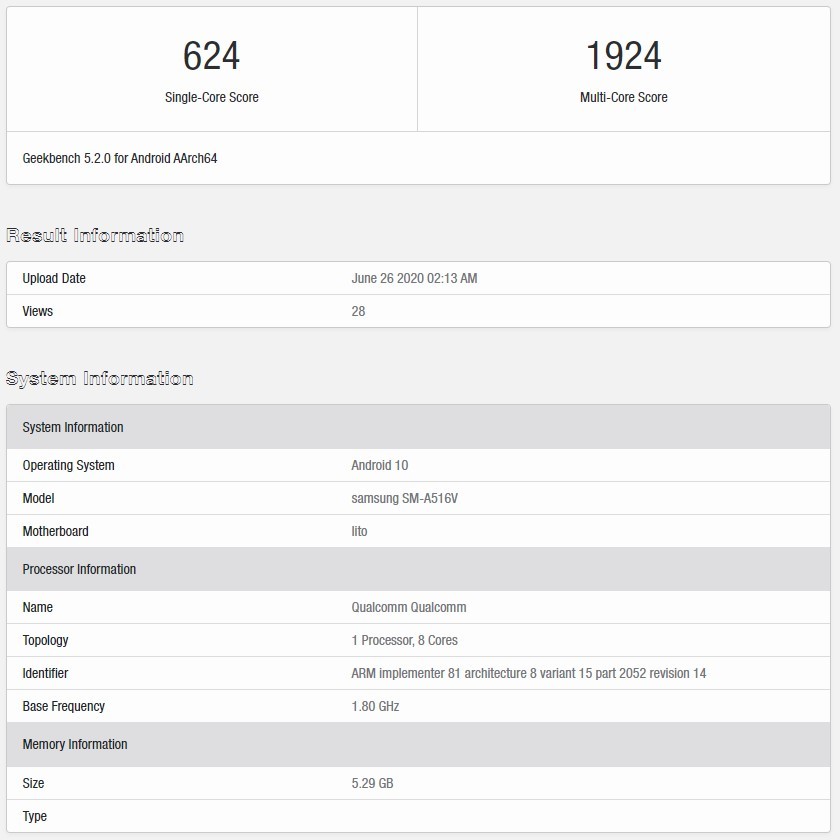 While the regular A51 5G, unveiled back in April, sports a 5G enabled Exynos chipset, the Verizon variant’s Snapdragon 765G selection could be due to the chipset’s support for both, mmWave and sub6 networks. The 765 and 765G both include a Snapdragon X52 5G modem.

It is interesting to see both, the A51 and A71 5G variants sporting a flavor of the 765 SoC, with the difference between the phones mainly residing in the camera department. Not much in terms of information on release dates for these devices are currently known. However, since the rumored A51 smartphone bearing the same SM-A516V model number has been spotted on by the Wi-Fi Alliance and NFC Forum for certification, it should not be long before they are launched.