A few weeks ago, Microsoft confirmed earlier rumors that it will offer a new version of Windows 8.1 to OEMs that will have its Bing search engine set up as the default choice. Now a screenshot that allegedly shows the OS in action has been posted on CentrumWindows forums. 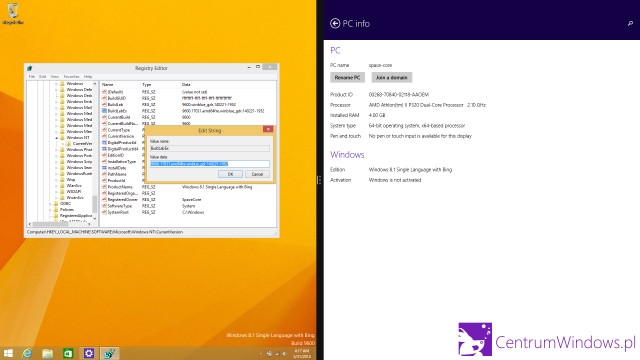 The screenshot itself is not much to look at but it does show it is running the Windows 8.1 with Bing build. The first devices that will be seen using the OS will likely be shown off during Computex, the large PC and electronic product trade show in Taiwan that begins next week.

As Microsoft has previously announced, Windows 8.1 with Bing is being offered to OEMs to install inside devices with screens that are nine inches or less in size. They are also being offered at a lower cost compared to the regular version of Windows 8.1, although Microsoft has not specified the amount of the reduced price. Users won't notice any difference in Windows 8.1 with Bing compared to the regular SKU and they will be free to change the default search engine to something else if they wish.

Thanks to Lukas for the tip!