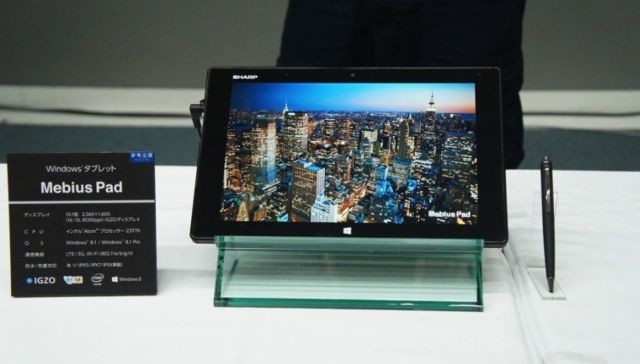 There are a boatload of new Windows 8.1 tablets due to be released later this fall, including models from Acer, Asus, and Sony, not to mention Microsoft's own new Surface tablets. Today, word has gotten out of yet another Windows 8.1 tablet that's in the works, but this one comes from an unexpected source: Sharp.

Yes, the company that's best known for making big screen televisions plans to launch its first Windows 8.1 tablet, the Mebius Pad, in its native Japan. Engadget spotted the product on display at Japan's CEATEC show. At first glance, the display on the 10.1 tablet is impressive; it's supposed to go up to 2560x1600 resolution with its IGZO panel. It's also supposed to be highly resistant to water and dust.

However, the Sharp Mebius Pad also has the current Intel Atom Z3370 processor inside rather than the upcoming Bay Trail version, which means it's not going to be as powerful, or have as long of a battery life, as some of the upcoming Windows 8.1 tablets. It's also not due to be released in Japan until early 2014, and there's no word if it will be launched outside that market. Still, the high resolution display sounds great and hopefully other OEMs will take notice of it for future product launches.

Update: Some Neowin readers have posted in the comments that the resolution on the tablet cannot be supported by the Intel Atom Clover Trail processor, so it's more than possible that Engadget has it wrong and that the tablet uses the Bay Trail version of the Atom processor, most likely the Atom Z3770.