Welcome to this, a comprehensive guide to understanding solid state drives. The purpose of this article is to help the reader understand how commercially available solid state drives came into existence as well as clarify some of the terms utilized when talking about these devices and some advantages and drawback this new technology presents.

Once done with this article, the following article should make perfect sense:

>Until recently, solid-state drives were too costly for mobile computing. As flash manufacturers transition from NOR flash to single-level cell (SLC) NAND flash and most recently to multi-level cell (MLC) NAND flash to maximize silicon die usage and reduce associated costs, "solid-state disks" are now being more accurately renamed "solid-state drives" - they have no disks but function as drives - for mobile computing in the enterprise and consumer electronics space. This technological trend is accompanied by an annual 50% decline in raw flash material costs, while capacities continue to double at the same rate. As a result, flash-based solid-state drives are becoming increasingly popular in markets such as notebook PCs and sub-notebooks for enterprises, Ultra-Mobile PCs (UMPC), and Tablet PCs for the healthcare and consumer electronics sectors.

What is a solid-state drive?
It is a storage device the uses solid-state memory to hold information. By 'solid state' we mean that it does not have any moving/mechanical parts like current hard drives do. The original term 'solid state' refers to the use of semiconductors in place of electron tubes, but the phrase has been adapted solid-state devices from electromechanical one.

Because solid-state drives have no moving parts, they tend to be less fragile than current hard drives and also produce less heat or noise and are typically smaller as well.

Types of solid-state drives
Solid state drives (SSD) are classified based on the type of memory they use. This can be divided in two: volatile and non-volatile. The difference is that one does not need power to keep data in memory (non-volatile) while the other will loss all information once power to the device is terminated (volatile).

Because this article is intended to be a guide to commercially available SSD's, it will only focus on flash-based SSD from this point on.

Back in the day, the entire flash chip had to be erased in order to store new information, but current -day chips have the ability to partially erase information while adding new one. This type of behaviour is known as 'writing in blocks'.

Flash drives store the information in an array of memory cells made from floating-gate transistors (a special type of transistor found in any non-volatile memory). There are two ways of storing information in these cells:

Types of Flash memory
Flash memory can be of two types: NOR (not or) and NAND (not and). This classification comes from the type of digital logic the memory is based on. The main difference is the way the memory cells are connected to each other as well as method utilized for erasing data on the cells (not covered in this article due to its high technical nature). Cells in a NOR chip are connected in parallel (similar to a NOR gate), which allow them to be read and programmed individually, while NAND cells are connected in series (similar to a NAND gate) which allows them to be read and written in series.

Initially flash chip developers utilized NOR chips because each cell could be accessed individually, but modern day flash-based memory uses NAND logic. Why did NAND flash win over NOR? Simply because NAND can be utilized to represent all other logical gates (AND, OR, NOR) in a less complex fashion. This means that if two memory modules with the same storage capacity were built, one using a NOR implementation and the other using NAND, the ladder one would be physically smaller and logically less complex but with the same (or better) performance than its counterpart.

Limitations and Advantages
This is by no means an exhaustive list of pros and cons, simply a sub-set of them.

Low, average and high pricing based on storage capacity 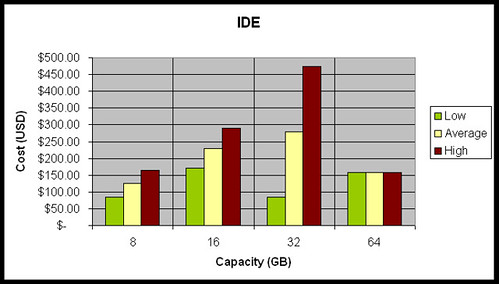 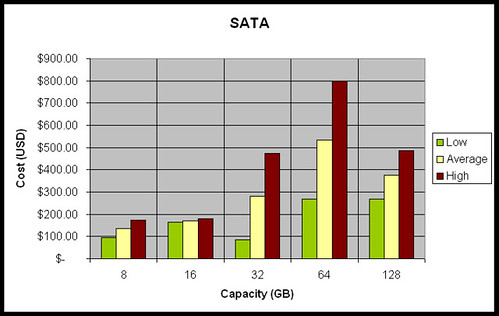 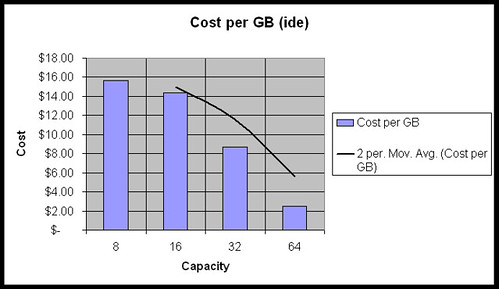 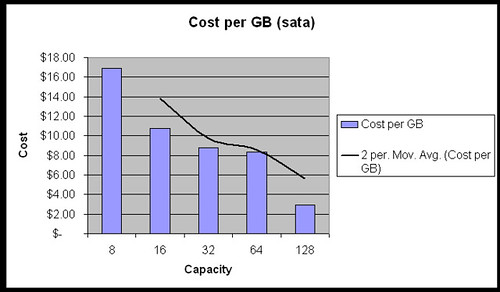