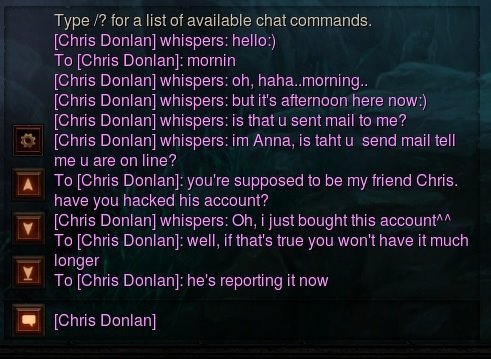 It apparently hasn't taken long for someone, or perhaps a group of people, to figure out a way to hack into Battle.net accounts for Diablo III. Eurogamer.net states that it has received a number of reports from players of the just released action-RPG sequel that someone has highjacked their access to the game.

That apparently includes Eurogamer.net writer Christian Donlan, who had his account taken over by someone known only as "Anna". You can see the chat conversation between "Anna" and editor Oli Welsh above this post.

Other players have reported that their Diablo III's character loot has been stolen from their inventory, along with their in-game cash. Apparently Blizzard has tried to reinstate those characters back to a time before they lost their in-game items and money.

The European servers for Diablo III were taken down unexpectedly, and without warning, for about four hours on Sunday. So far Blizzard has yet to comment on these hacking attacks or the sudden server downtime.

While the in-game cash and items lost don't currently make a difference in the real world, they might very soon. Blizzard is supposed to launch its real money auction service for Diablo III on May 29th. If the hacks of player accounts continue, that could mean a lot of money lost for both players and for Blizzard.