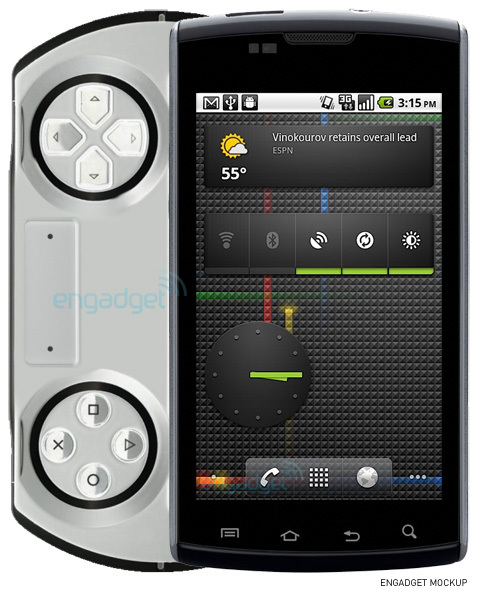 Even though Sony has yet to release a 2+ Android OS smartphone, the company is hard at work at making a gaming orientated Android 3.0 Gaming Smartphone that carries the companies Playstation branding, according to Engadget.

Engadget's “trusted source” tells them that the phone is already in the late stages of planning, and that is being made to be a cross between the Samsung Captiva and the PSP Go.  It has a landscape slider with game controls in place of the standard QWERTY keyboard. With a standard gaming D-Pad, and instead of the joystick it utilizes a  “long touch pad” for analog controls, along side the standard PSP buttons.

The phone will likely sport a large 3.7 to 4.1 inch screen with WVGA or better screen resolution. It may offer a 5 megapixel camera that Engagdet says is not a final decision yet. It will likely have the 1GHz Snapdragon CPU on board, and is described as being mostly black with silver highlights. The gaming section of the phone will be white/silver in color, and is apparently carrying both the Xperia and Playstation branding.

“Pretty damn sexy” is how people who have seen the phone are describing it, the image above is simply a mock-up by Engadget, and does not give the phone justice. But is simply there to give people an idea of what the phone looks like.

The phone should contain Gingerbread (Android 3.0) with a Sony skin on top of it, as well an all new Android Market to accompany the device, which is aimed at the games available for the smartphone. Initially only available on the Sony device, these titles may be made available for other Android phones as well.

Games will be graphically in the range of PSX or PSP games, meaning true 3D gaming is headed to an Android capable phone. Titles currently being shown off seem to be focused around some older PSX as well as new PSP offerings, with games like God of War, Modern Warfare, and Little Big Planet  a possibility on the phone. Future plans for games consist of an augmented reality feature.

The phone may see a release as early as October this year, but they are unable to confirm this date.

Engadget ensures us that this is a true piece of tech, and if it is indeed true, then Google has finally found a solid entry into the gaming market for the Android platform. As well as delivering the much wanted Playstation Phone, which some have been waiting a long time for.