South Park: The Stick of Truth has been a long time coming, first it got delayed and delayed, then it changed publishers to Ubisoft then it got delayed again while there was some talk that it might never see the light of day.

What makes matters worse is that previous games based on the series have been pretty dire, including the awful first person shooter that came out back in 1998. So we were not left with much hope when the new game was first announced.

The good news is that it has finally made release, and the even better news is that it is - what I believe to be - the best South Park title that will ever make it to market. RPG developers Obsidian and the show’s creators Trey Parker and Matt Stone have done a superb job mixing in role-playing elements and keeping true to the South Park look and feel. 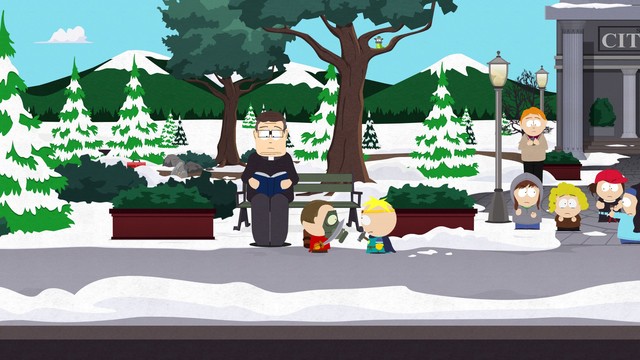 The game can be quite in-depth at times too, with numerous roles to pick from and perks, progression and levelling up you would expect to find in any decent RPG. You choose a class at the beginning of the game, I went with Warrior, but you get a choice from others such as Mage, Thief and Jew.

The fighting side of things happen when you either approach or get hit by one of the enemy characters in the game. The fights are JRPG in style with regular attacks and buffs mixed in with special abilities (though South Park based!). Early on in the game you will be trained in various moves by Cartman, one involving you farting on Kenny dressed as a princess, need I say anymore.

Attacks made during these battles can also be improved by timed button presses. For example, early on you are joined by Butters and he has options such as Hammer of Justice among others. One attack has you spinning the left thumbstick around and then pressing the Action button on your controller at the right time when prompted. It works well and doesn’t get tiresome, thanks to the excellent voice work, animation and variety of attacks available. 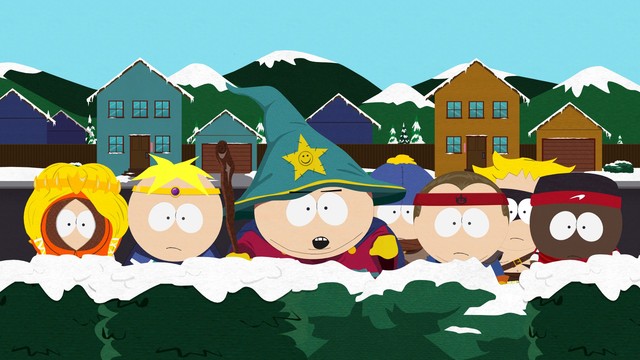 It also isn’t an easy game, you can find yourself killed early on by going after enemies who are too high a level for you, and levelling up is a must-do task early on. Perks are improved by making friends in the game, the more friends you have the more perks you will get. Making friends can be done by either chatting to them or completing a task. Certain friends can also be used as a special fighting friend once in a while, such as God who will come down from the sky and mow-down your enemies in a hail of gunfire.

Talking of people you meet in the game, those who you do befriend will “friend” you on the South Park social media site, Facebook. This is yet another highly funny section of the game where characters comment on pages, talk about things happening around them and basically mock you. The social page leads on to the map, perks and quest tracking.

The game is full of quests which steer you away from the main one, and I found myself just wandering around South Park for at least 6-7 hours before I even bothered taking on the main story; this is a good sign that things have been done right in a licensed game for once.

Side-quests themselves can involve you retrieving objects, collecting dodgy looking post for slave and more. The quests are always fun, and due to the writing and voice work they rarely feel like a chore, like they could have done if it was any other RPG.

As in any RPG you can sell and buy items. Throughout the game you collect junk from destroying boxes, taking down enemies and from completing quests. This junk can be sold in shops and via various characters that you meet in the game world. Each piece of junk has a description worth reading before you sell it though once again they can be funny, despite not having any use in the game other than gaining currency. You can buy new weapons, armour and buffs for your character but they are restricted based on the level you have gained at the time.

Graphically I can’t find any fault with the game whatsoever, it looks and plays out just like an episode of South Park, the animation is spot on, the look of the places you visit, the characters you meet and the cutscenes are all perfect. Cutscenes are done in-engine and you can’t tell the difference from what you would see on a TV episode to the game, and that credit goes both to the developers and the creators of the series. 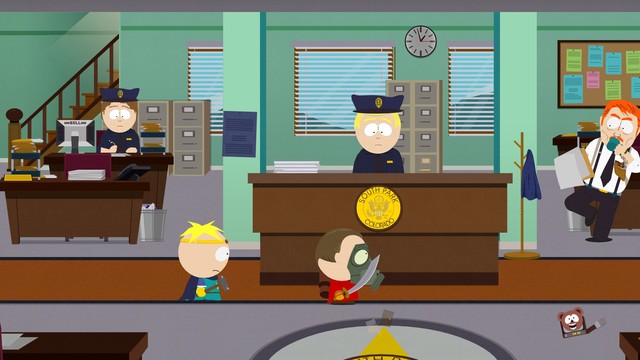 We have been playing both the PC and the PS3 version for the past week or so, and the PC version clearly leads the way on visuals as it can run at 1080p with little problem, the PS3 and Xbox 360 versions are running at 720p, but we have to note that there was the odd bit of judder and lag in the PS3 title, but hopefully this will be fixed by launch. The game has no graphic options to fiddle with on the PC other than resolution, so just get into the game and enjoy it.

Sound is excellent too, voice work is brilliant by the creators and adds to the feeling of being part of South Park. The only issue I had was some repetitive dialogue when clicking on characters, but this was few and far between and just something I had to mention.

The writing is excellent as expected, assuming you are a fan of the show of course. You get the kind of juvenile humour you would expect and more. It is one of the few games that I have ever laughed out loud at since the days of a Bevis and Butthead adventure game.

Overall it is probably the best licensed game ever, it captures the look, feel, dialogue and story writing of the series while mixing some great but simple RPG elements into the mix. Obsidian have done a great job here and it was well worth the wait, but only for South Park fans. The only downside I could find is that lasting around 20 hours we can only hope that the creators actually want to produce a follow up, something that during their recent interviews they stated that they haven’t really taken a shine to.